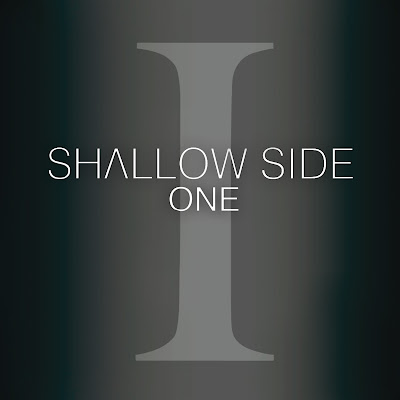 I love when bands take various styles and meld them into one sound, creating something just a little bit different than the norm.  I'm not saying the band invents something wholly original, because those bands are few and far between.  No, what I mean is when a band is willing to step slightly outside of the box to pull in elements of other genres to complete their musical vision.  Shallow Side is a band that manages to do just that by combining elements of modern hard rock, southern rock, and classic rock, rolling them all up in one tight package and shoving them directly into the ear of the listener who is fortunate enough to stumble upon the band.

Hailing from Alabama, Shallow Side wears their Crimson firmly on their sleeve, which is immediately obvious in the southern-fried stomp of the lead track, "We Roll", which features the line "just like the Tide, we roll".  Now, for the uninitiated, for the non-college football fans in the audience, when Boatright sings that line, he is referring to the University of Alabama football team's catch phrase and rally cry of "Roll Tide Roll".  That is a fitting line to include in this throttled up party rocker, as the energy level is high here with this drum-and-bass heavy, clap-clap-stomp styled number that feels very much like a track that will be cranked up at tailgate parties throughout Alabama Nation on Saturday afternoons.  A simple guitar line, solid backing vocals, and some supporting keys add a bit of flavor to the track that, just like a team's entrance song, leads the band out of the musical tunnel and onto the playing field that is the rest of the album.

A southern-fried guitar lick kicks off "Rebel", which then slides into a more modern rocker that alternates between softer verses and heavier, punchier choruses.  Again, a thick, chunky rhythm sets the foundation for much of this track, which is complete with hand claps, banjo, and a blues-drenched guitar solo that all come together to compliment each other perfectly in one of the truly kick-ass moments on the record.  Love this track and it's...ahem...rebel attitude.

"Renegade" is a cover of the classic Styx track, and on one hand, it is my least favorite track here, largely because I am a huge Styx fan and I'm not overly enamored with bands makimg updates to classic rockers that I grew up with and hold in high esteem.  But on the other hand, I absolutely love the band's take here, which does feature a slightly faster tempo and a seriously scorching, if too short, guitar solo that really deserves to be heard.  Boatright's vocal range is much lower than Tommy Shaw's is, which gives the track a different feel, but his performance is still strong and commanding.  The keys largely play the same supporting role that they do in the original, but I'd be lying if I said I didn't miss the big, layered harmony vocals that come out of the original's solo break, but the additional heft and crunch help to cover up that little bump in the road.  As it is, this is a fun track that show the band's willingness to give a nod to their classic and southern rock influences while not just playing a note-for-note cover song just to take up space.

"Fight Or Flight" is a much more head-on modern rocker, very similar in style and approach to something Shinedown might be heard to do.  Honestly, the least memorable song on the record despite being the heaviest track here.  I'm not saying it is a bad song or that I don't like it, because its not and I do.  I just think the fact that the band loses a bit of that uniqueness, that bit of "we're doing things our own way" attitude, which keeps this song from really standing out for me. Even on the cover of "Renegade" the band puts their stamp all over a well-known classic rock staple and makes it their own.  Here, no matter how punchy and aggressive the guitars, no matter how angry the vocals, "Fight Or Flight" sounds like so many other good-yet-not-memorable rockers on the radio.  Perhaps the track is a victim of the uniqueness that surrounds it, which leaves the song sounding like something I have heard slightly different versions of in the past from other bands.

That changes when the twang of the guitars on "Can You Hear Me" lead the track in, crashing headlong into a thunderous drum section and more modern guitar tones.  This track has a harder-edged, Daughtry feel for me, which is a good thing, as I really appreciated that band's first two records.  The pre-chorus backs way off the guitars and leaves Boatright out there on his own of the drums and some ambient sounds before the guitars crunch their way back into the track.  I like the dynamics of this song, the stop-start changes to the rhythms, the variances in Boatright's vocal approach, and the overall feel here that dovetails emotion and aggression to a great degree.  Nice track here.

The EP closes with "Start A Fire", which again finds the band not going the tried-and-true route, as they experiment with some electronic drums and ambient sounds in various places, while still coming at you with edgy guitars and a huge bottom end to their sound.  Boatrights vocals remain firmly in control, even when he cuts loose on a near-shouting snarl on the chorus, and the backing vocals are definitely enhancers on this track, as they really are throughout this EP.  A pretty cool guitar lick, and a catchy rhythm, run throughout the song, which is catchy enough to make you really wish the EP had not come to an end just yet.

A couple things really ring true for me after several spins through this EP.  First, this band is tight...I mean EXTREMELY tight.  There is no slop in their play at all, regardless of the instrumentation they choose to bring to the song they are playing.  Yeah, yeah, I know that studios can make average bands sound good, but you can't fake chemistry, and you can't make up hours upon hours of playing together that gives a band its feel.  Shallow Side has chemistry in spades on this mini-album, and they sound like they are having fun, even when they sound pissed off, like on "Fight Or Flight".  Of special note here are the really good skills on the drums from Fields, and some awesome acrobatics on the guitar solos from Trimble.  For a band I have never heard of prior to this, Shallow Side seems to have hoarded some fairly significant musical talent for their little band and stashed it away so that they could unleash it upon the listeners at the time of their own choosing.

Secondly, the band knows who they are and are unapologetic about it.  One of us is a southern rock fan?  Sure, we'll drag some of that into the mix here.  Wanna play a banjo?  Sure, we'll find a place for it.  Oh, you've got something you wanna get off your chest as you scream at someone.  Yeah, we can do that, too.  I can appreciate that as a listener because while the sounds and styles vary from track to track, never do you feel like you have a bunch of CDs on shuffle here as the band changes things up.  Rather, you feel exactly like the band intends for you to feel...entertained, a bit challenged, possibly a bit physically exhausted, and still wanting more.

Rating:  Outta nowhere, Shallow Side had me cranking the dial to 8.5.  Despite being a dyed-in-the-wool Husker fan, even I was pounding along to "We Roll"...and I never stopped all the way through this 6 track EP.  I anticipate big things from this band in the future.

Back To Reviews Index
Posted by arttieTHE1manparty at 11:40 AM