COLLECTIVE SOUL "See What You Started By Continuing" 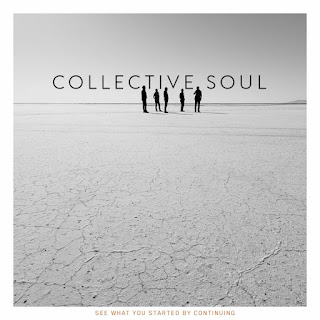 While definitely not a "comeback" album, per se, See What You Started By Continuing is the first new studio record from Collective Soul since their self-titled release from 2009.  The Roland brothers, Ed and Dean, along with bassist Will Turpin, continue to push forward with much the same style and approach that they used when they were dominating the rock charts in the 1990's, producing platinum albums and number one hits with regularity.  This album is much more raw and organic in its approach than the last couple of albums, seemingly picking up where the last really good Collective Soul album, Blender, left off in 2000.

See What You Started... is the first album for the band's newest members,  Rabb and Triplett, who joined Collective Soul in 2012 and 2014, respectively.  Both are more than competent throughout the record, with Triplett in particular showing that he has a mastery for the sound the band has refined and honed throughout the years, as well as showcasing his ability to move the band's sound forward a bit.  Such is the case with possibly the LEAST Collective Soul sounding track on the album, which was ironically released as a single, as "This" sounds a bit like the band may be trying for more of a modern radio rock sound, especially with the distortion of the opening guitars and the production style, but the vocals...and especially the harmonies...remind you just whose album you have spinning in the player.  The follow-up, "Hurricane", changes things up in a more familiar direction, however, as it has a definite throwback sound, but doesn't come across as a clone of anything the band has done before, although it's bouncy rhythm and catchy harmonies make it feel instantly recognizable despite being a new song.  The same can be said of the next track, "Exposed", which starts off with some interesting acoustic guitar work before the Collective Soul crunch kicks in.  The chorus is insanely catchy here...and pretty humorous, as well...as Ed sings to the antagonist of the song, "You took all of my money, you took all of my clothes...".  Much the same follows for most of the album, with mid-tempo rockers that have a familiar style and sound to the biggest hits the band has ever produced, but still managing to sound re-energized from the last couple of records the band released.  "Confession", for example, manages to squeeze in a guitar riff that could have come straight out of the recording session for either of the first two records, despite the fact that this is a totally different guitar player.  The band is that in sync, and that comfortable, with who they are and what the Collective Soul sound is at this point in their career. "AYTA", another radio single, throws a nice acoustic guitar into the mix and again combines a familiar feel with a new vibe.

My only real issue with this album is the album's closer.  "Without Me" completely messes with the formula of where this record seems to be headed, which is towards a new set of potentially great Collective Soul songs, by throwing in this bloated gospel-flavored track with "hallelujah-esque" backing vocals, horns, and an organ that just really make me ask myself, "why?"  The band really sounded to me like they were attempting to go fully into embracing who they have been when they were at their best, and then they get, I don't know...weird...on me.  This song doesn''t kill the record, but it ends up making the record one song too long for me.

Disc 2 (which I'm told is available exclusively as a Wal-Mart bonus disc), is called a "Greatest Hits" disc, but it's seriously lacking, if you are actually after a hits package.  There are some obvious songs missing from this collection, with the huge hits "Gel" "Where The River Flows", "Smashing Young Man", "Precious Declaration", "Listen" and "Why, Pt. 2", all being left off despite all cracking the Billboard charts as Top 5 songs.  Purely a marketing ploy, but hey, perhaps some new fans will be made of some random kid picking up this album on a whim and then discovering just how good Collective Soul is and has been throughout their career,   Nowhere in the notes that I can see does it state that these are re-recorded songs, but I am about 95% sure that they are, as the most familiar tracks sound just slightly off from their originals to my ears.  Maybe my sonic receptors have changed a bit in the 20 years since these songs came out originally, but something doesn't sound like the original thing here, which is still okay, as it does show that the newest version of this band still has the chops to pull off these songs.  Again, a LOT is missing for this to be a best of, but its worthspinning from time to time.

The packaging is insanely simplistic, with a single band photo, no lyrics, and a small thank you section to go along with the usual credits and legal information.

Overall, this is not the best album Collective Soul has released, but it is a very solid record with some definitely good moments.  The band is obviously comfortable with who they are and the place they hold in the industry now, and are free to make Collective Soul music without seeking any sort of real radio success, which I don't think they will find in today's modern rock scene.

Rating:  Crank this at 7, regardless of the version you purchase, because the "hits" disc really is just extra icing on an already relatively sweet cake.

Back to Reviews Index
Posted by arttieTHE1manparty at 7:35 PM