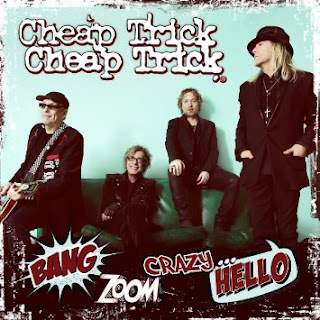 Cheap Trick has returned with their first album of new material since The Latest, which came out over seven years ago, believe it or not.  Not only is this their first new record in quite some time, the new album, Bang, Zoom, Crazy...Hello is also the first album to feature Rick Nielsen's son, Daxx, on drums instead of long-time Cheap Trick skinsman, Bun E. Carlos.  This fact alone has led to much consternation and debate among members of the band's loyal fanbase, as Carlos was a beloved figure who, somehow, remains a member of the band "but he's not touring and he's not recording", according to an interview Zander did recently.

Anyway, back to the new album.  Cheap Trick made no bones about the fact that they were attempting to get back to their classic sound on this album after meeting with mixed results on most of their output since the late-90's.  And, largely, the soon-to-be-Hall of Famers succeed in doing just that.  In fact, as far as style and approach goes, this album could have come out just as easily in the early 80s following Dream Police or All Shook Up.  The songs, for the most part, have that classic-era Cheap Trick sound, and I have no real issues with Daxx Nielsen's ability on the drums, as he does nothing to distract from the overall feel and sound.  I'm guessing that growing up around one of the most famous American rock bands of all time has rubbed off on the younger Nielsen just a tad.

As for the rest of the band...and by that, I mean the long-term, dare I say "REAL" members of Cheap Trick (sorry, Daxx), they are all in fine form here, with Zander's voice still sounding very strong and clear, and Nielsen's guitar rocking as if it was still the band's hey day, and Petersson's basslines bump and jump and throb all over the place, keeping the tracks bouncing right along in true Cheap Trick fashion.

As for the album itself, things start off in a very nice way, as the band comes out rocking with "Heart On The Line", a catchy, upbeat number co-written by Greg Giuffria that sounds like it's straight from the Cheap Trick playbook of old...but I knew...just KNEW that I had heard this song before.  So, after much searching, I finally figured it out...the song appeared on the Sahara album from House of Lords back when Giuffria was in the band!  The song is definitely given a Cheap Trick makeover, as it is far poppier and not as "hair metal" in its approach, especially in the production of the drums and the tone of the guitars.  Regardless, this is a really good song to start the album off, and one that had my attention immediately.  "No Direction" chimes in next and sounds equally strong and every bit as comfortable, The first real treat for me is the more mid-tempo, slightly darker sounding "When I Wake Up Tomorrow" which showcases Zander sounding particularly strong and in charge of this track, with Rick's guitars ringing strongly in the background on this moody number that has hints of the Beatles...and David Bowie...slipped in for good measure.  The album is really starting to find its retro-inspired stride, as far as I'm concerned, but then we slip just a bit.

The first stumble for me is "Do You Believe Me?" which is pretty good...not great...but its missing something.  It sounds almost bored in its tempo, and the lyrics don't really do anything for me, although Zander does his best to pull what he can from what he has to work with, and Rick adds in some nice guitar acrobatics in a long, extended solo section that is actually probably too energetic for the plodding pace the bass and drums have set.  The lull is short-lived , however, as "Blood Red Lips" pumps some fun and life back into things with a song that sounds like a hybrid that melds Cheap Trick and T-Rex together, and it has one of those rhythms that just screams for fans in the crowd to clap along (which is probably what reminds me so much of T-Rex...).  "Sing My Blues Away" is a nod to 80s-era Cheap Trick and it has a very familiar feel and style and its a nice quasi-ballad, although not of quite the same caliber of "The Flame", which I think it could most easily be compared to.  "Roll Me" is a very solid rocker that is one of my favorite tracks here, which leads into something of a Cheap Trick tradition...the cover song.  Personally, I LOVE what the band does with Dobie Gray's "The In Crowd" here, with Zander doing a really good job of throwing a nod to the song's past while still sounding like himself...and sounding like he's having fun.  Maybe not as instantly memorable as their take on "Don't Be Cruel", but a really, really fun cover, nonetheless, and another of my faves from the album.

"Long Time No See Ya" is a solid enough rocker, but it comes across as somewhat cookie-cutter in its approach.  Not a skipper, but not a bit hit, either.  "The Sun Never Sets" is, in my opinion, boredom set to music.  It is rather uninspired both musically AND lyrically, which is not often the case with this band, but "All Strung Out" manages to end the album on a fairly high note, although it really does feel like Cheap Trick trying to grunge up their sound or something, if you can imagine that.  Even the title sounds like a tongue-in-cheek poke at the drug-addled grunge rockers of the 90s.  It's not going to likely make any fan's greatest of the band compilation, but it did put a smile on my face, perhaps because I was seeing humor where maybe I shouldn't have been looking for it.  Who knows?

Personally, I like the production on the record, as it is crisp and clean, without sounding overly polished, which I think was a real problem with several of the band's albums in the late 90s/early 2000s.  Everything is pretty well proportioned, with no one instrument getting buried...or getting extra amounts of push in the mix.  I think Rick carries a very nice tone throughout the record, allowing his guitar to remain true to its classic tone and voice, but also letting himself get a bit experimental...even frenzied...on songs such as "Do You Believe Me?"

Is it the best album Cheap Trick has ever done?  Nope, but with 17 albums under their belt now (studio albums, that is), I easily put it in the top half, with the first five and 88's Lap Of Luxury all being ahead of Bang, Zoom, Crazy...Hello by varying degrees.  It is, however, possible that this new record could nudge its way into the top 6 at some point, but edging out any of the first five classic albums is going to be a stretch.

Zander and Nielsen have both said they have no intentions of slowing down despite the Hall Of Fame induction later this year, and Zander has actually said they would love to get back to the days of putting out a new album every year or so.  If they are all this solid...or better...be sure to seek them out, as Cheap Trick proves they still have the chops, they still have the energy, and they can still rock, even if the band is in something of a "Comfort Zone/Cruise Control" mentality in spots.  Its been 40 years folks...I think they deserve at least a bit of slack if only 8 of 11 songs are good-to-great on an album.

Rating:  Crank this to a very respectable 7 and have fun with an old friend!

Posted by arttieTHE1manparty at 8:30 PM