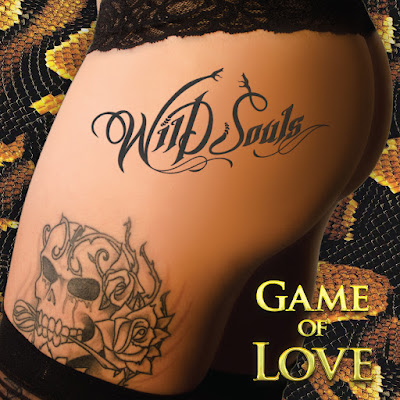 Greece is not the most common location for really good, 80s-inspired melodic hard rock, but Wild Souls is one of the exceptions to that unwritten rule.  With a solid grasp of melody, strong lead and backing vocals, some excellent guitar work, and just enough keys to satisfy the sweet tooth of the more AOR-minded fans, Wild Souls has put together a solid package of mostly uptempo, guitar-driven hard rockers that is among the best I have heard this year.

On top of the top-notch musical performances, the songwriting here is of a caliber not commonly heard in more retro-styled projects.  So often, bands that are looking to emulate the 80s sound find themselves sucked into songwriting and lyrical cliches, but Wild Souls largely avoids this trap.  I know that the song titles don't necessarily bear proof of that, as most of the titles are pretty standard 80s fare, but musically, the band takes their inspirations and then updates them, adding some little musical twists that keep the listener interested and not feeling like they are listening to a cover band mimic and maul the tunes they grew up loving.

Particularly strong tracks here are the album's opener and title track, "Game Of Love", the hyper-catchy duo of the album's lead single, the hard-charging guitar rocker, "Dirty Mind", and my personal favorite, "Shame On You", which also showcases yet another in the long line of unknown-yet-amazingly talented guitar players, with Tsiligiris absolutely dominating the fretboard here.  I also really dig the exceptionally-well-executed bump and grind of "Pretty Babe", which has some great bass work from Karapapazoglou.  "Riding" is another really good rocker, with some more nice guitar acrobatics from Tsiligiris, who really gives the listener a comfortable feeling with his tone and approach, but comes off as uniquely original at the same time when he goes of on extended solo runs.  The one true ballad here is the beautifully performed, piano-based "One More Night". Good, good stuff right there, even if it doesn't particularly rock at any given point.  In fact, it is far more like a true, melodic AOR ballad than an 80s hair metal power ballad. even when Tsiligiris slides in with his guitar on a spectacular solo, or when the solid and underappreciated Tsiligoudis finally gets around to thumping his drums into the mix.

Also worth mentioning here is the top-notch vocal approach of Nikolaou.  To be honest, I wasn't 100% sure I would love his voice upon hearing the opening track, but after hitting track two, I found myself really enjoying his style and range, and after repeated listens, I can truly state that he has one of the better mid-range tenors I have encountered in this style of music in recent memory.  Rich in tone and never coming across as strained, Nikolaou's voice runs like smooth whiskey over the more soulful numbers, like "Pretty Baby", but can also add a bit of edge when necessary to give a bit of extra oomph to a rocker like the Deep Purple-meets-Whitesnake romp of "Rock My World".

The band was wise to keep the album trimmed to just the best nine songs they had composed at the time,  Every song here is solid, with not a single "filler" track for my money. Even the album closer, the slightly key-heavy rocker, "I Need Your Love" is of top quality musically, although this is the one track that is probably a bit weak in the lyrical department, leaning a bit more on the cliched title as part of the chorus than the rest of the songs here.  Even so, it doesn't come off as tired or forced and does nothing to detract from the surprising overall quality of this release.

Set to be dropped on Halloween of 2016, this album is definitely one that falls into the "treat" category.  A pleasant surprise for me from start to finish, I find myself returning to this album time after time for a melodic pick-me-up on par with the best material of this style and sound that I have been sent for review this year.

The band has released a video for "Dirty Mind" to help promote the release of the album, and you can check it out here to get an idea of the excellent quality of this record.

Ranking:  Some excellent, crankable material here.  Crank this to 9!  I really, really enjoyed this record, even though I honestly went in with less than high expectations.

Posted by arttieTHE1manparty at 3:08 PM