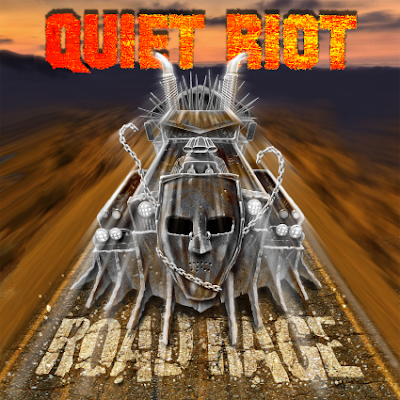 Of course, there is a lot of history following that landmark album and this newest effort: the change in style and sound with the replacement of Kevin DuBrow with Paul Shortino on lead vocals, the return of DuBrow...and his untimely death...the ill-fated, Jizzy Pearl-fronted 10 album, and several other stops and starts along the way, even with Road Rage.  Left for dead several times, the band finds itself once again about to release an album, nearly 35 years after Metal Health blasted onto the scene, and once again met with questions and concerns from die-hard fans who have been with the band since the pre-Metal Health days with Randy Rhoads on guitar.

Drummer Frankie Banali is the lone-surviving member from the Metal Health days, but he finds himself flanked by familiar faces, as long-time bassist (1985-87, 1994-97, 2004-07, 2010-present) Chuck Wright helps to keep the rhythm steady for the band, and Alex Grossi (2004-07, 2010-present) contributes on guitars.  The newest, and surely the most-scrutinized, member of the band is new lead vocalist, James Durbin, who joins the Quiet Riot family on this new album.  Durbin is, of course, most well-known to music fans as a Top 4 finalist on Season 10 of American Idol, where he frequently performed hard rock and metal songs on the show, putting his spin on songs by Aerosmith, Journey, Queen, Sammy Hagar, and Judas Priest, among other more mainstream acts.

For those who may not have been following the band recently, this new album was actually already finished and ready to be put out back in March with previous singer, Seann "Tarsha" Nichols, but things went a bit astray, Nichols was shown the door, Durbin was hired, and he re-recorded the entire album before its release to media outlets by Frontiers Records.

The album starts off with an okay lead in, as "Can't Get Enough" is catchy enough, with a solid, uptempo guitar riff and some thumping drums, but there is absolutely nothing about this track that sounds Quiet Riot to me.  In fact, when the music is coupled with Durbin's Bon Scott snarl, "Can't Get Enough" sounds like an AC/DC cover band's attempt at an original track.  Seriously.  And you know, what...they do it pretty darn well.  I even find myself liking this song, to be completely candid, but at no point do I feel like I am listening to Quiet Riot.  There is absolutely ZERO metallic edge here, just the barroom three-chord shuffle rock that AC/DC is so famous for.

"Getaway" leads in with a Middle Eastern sitar before settling into a Zeppelin guitar riff (hmmm...hasn't this been done before...BY ZEPPELIN???), and I found myself seriously questioning why this record was labelled as a Quiet Riot record.  I was only on track two and I still had not found anything Quiet Riot about this album.  Now, "Getaway" is absolutely NOT a bad track.  In fact, I like it...a lot!  If I had to rank them in order of favorites, "Getaway" would probably be my third favorite track on the record.  It really is catchy, has a cool groove, features some nice fret work from Grossi, and Durbin sounds pretty confident here.  The only problem is that it just doesn't sound like Quiet Riot.

"Roll This Joint", for lack of a better description, is just plain silly and juvenile lyrically.  I mean, come on, when a song resorts to referencing Cheech and Chong, you know things aren't going in a good direction!  Musically, "...Joint" isn't a horrible track; in fact, it has a pretty catchy hook to it that 80s fans are going to feel like they have heard before (think Whitesnake when you spin this song and you will know what I'm talking about).  Durbin's vocals hint at getting off key a bit on the bridge here (where the Cheech and Chong reference drops in), but he manages to rein them back in just enough to keep my ears from nudging my finger into skip mode.  Grossi has a nice solo here, but the insipid lyrics are a total turn-off for me.  Perhaps if I had been (or was still) a stoner, I could find some sort of wry humor here, but after finishing this review, I have never cued that song up again.  Not once.

Its not until track 4, "Freak Flag", that longtime fans of the band are going to feel like they are listening to an actual Quiet Riot song, and from here through about track 9, things are actually pretty good.  "Freak Flag", which is easily a top four track here, has a solid Metal Health or Condition Critical-era feel to the music, and Durbin adds a younger DuBrow edge to his vocals that I think classic fans will find themselves acknowledging and even appreciating.  If nothing else, it gives the listener hope that Durbin will be able to deliver the goods on the classic material in a live setting.  There is a wicked little guest-vocal spot from one Mr. Alice Cooper (at least it sounds like Cooper...I don't see him credited anywhere in the press release) here that adds to the cool factor of the song, and I found myself returning to this track repeatedly while writing this review as an example of what I think Quiet Riot could still be given the right material.

"Wasted" finds Durbin using a lower vocal range for parts of the verses which is actually pretty cool as it gives the track a Dangerous Toys kind of feel when he shifts back up the vocal scale.  In fact, even the music here reminds me of Dangerous Toys, although it isn't quite as aggressive as most of the Dangerous Toys rockers that come to my mind right now.  Solid, steady rhythm work and some catchy guitar licks are included here, although I'm not really sure why Grossi chose to exit the song with some simple chord progressions rather than ripping into a killer outro of some sort.

"Still Wild" is my favorite cut on the album and is a track that musically has more in common with the Shortino-era of the band than it does anything DuBrow even did.  Even here, Durbin sounds more like Bon Scott than anyone else, although he does lower his range to a more bluesy moan in the middle section of the track where the song morphs into a slower, Whitesnake/Zeppelin groove and guitar solo before the final chorus section leads the song home.  I really, really like this song and wish the entire album had gone in this direction.

"Make A Way" continues in this bluesier vein to a large degree and, not surprisingly, it is another song that is easily in the better half of the material here.  Again sporting more of the Shortino-styled groove and feel, there is even a harmonica solo thrown into the mix to give it that bluesy feel that is driven so well by the guitar work of Grossi.  Not as memorable as some of the other tracks, but still in the solid section of the record.

"Renegades", much like "Freak Flag", has a really nice DuBrow-era feel to it.  The backing vocals on the chorus really go a long way to support the lead vocals, and the verses...especially the second one...really hearken back to a young DuBrow, with some spit and sneer to the tone.  This...THIS...is what most people are going to wish the entire album sounded like, and I would have definitely been happy with this direction also (although, again, I would have preferred more stuff like the Shortino-esque "Still Wild").  A nice solo from Grossi ushers in the final chorus section on this song which has the most 80's feel to it of anything here.  Top four for me, no question.

"The Road" is the big ballad of the record, and it is an extremely well-done song.  Neck and neck with "Still Wild" for my favorite track on the album, this song is everything the big 80s ballads were.  Lighters in the air..carefully so we didn't ignite the hair of the person next to us...swaying back and forth, "The Road" absolutely soars out of the speakers here!  Durbin sings his tail off on this one and Grossi absolutely rips through a solo here.  My main complaint is that I wish the song had been at least another turn through the chorus longer, so that Grossi could have dropped in another solo break, followed by a huge outro section, because at just 3:40, this thing is almost a tease; it is that dang good.  Love this song and its execution.

"Shame" is pretty forgettable, and perhaps that owes at least in part to the killer track ahead of it.  Regardless, other than another Zeppelin vibe, there isn't a lot to note about this track, although Wright works a pretty cool bass line throughout the song.  Just a very "meh" moment for me.

Album closer, "Knock Em Down" closes things out somewhat well, with the glammiest sounding effort on the record.  Its a solid rocker with a pretty catchy chorus, but it pales next to a track like Crashdiet's "Knokk 'Em Down", as there is little in the way of attitude or angst here, which makes the name (and chorus) of the song somewhat misleading.  Not bad, but not a song I find myself excitedly tracking to at any point.

One thing I don't particularly care for here is the production of the record, which comes across as rather flat.  There is no muddiness or anything of that nature, but there is no polish, nothing jumps out of the speakers at you, and for a drummer like Banali, the percussion sounds here are rather muted and mundane.  I also found myself constantly hoping for some big, gang-shouted vocals, but they were never there.  Perhaps these are issues that are addressed before Road Rage is released, but I fear that this is the final mix and how things will come across on the CD, with a once mighty band like Quiet Riot sounding like they were recording on a garage band's budget.  Had they been given the "big band = big sound" treatment, I think they could have squeezed a bit more life out of this record.

Overall, this is NOT a bad record.  Again, most of the section from tracks 4 through 9 is actually really, really good.  In fact, I'd say tracks 2, 4, 6, 7, 8, and 9 would make a really solid EP that I would find myself returning to.  But filler material at the beginning and end of the record bookends the good stuff, and track 5 interrupts the flow of things for me.

For most people who seek this album out, however, the real issue is going to be the band seemingly searching for an identity throughout the the record, at times looking back to the blusier sound they steered for with Shortino, while at other times teasing the metal-tinged style that DuBrow and Banali elevated the band to superstar status with.  The problem is that most of the time they are actually somewhere in between, but never do they truly manage to capture the Quiet Riot of the past...regardless of the incarnation you prefer...nor do they really do anything to advance the style and sound of the band to something new.

Rating:  Rock-worthy, regardless of what some seem to think of it, I give Road Rage a 6.

Back To Reviews Index
Posted by arttieTHE1manparty at 3:07 PM