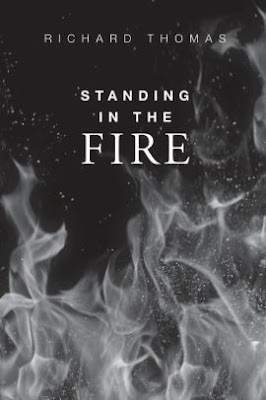 Few will know who Richard Thomas is when they pick this book up, but all will know who he is...and more importantly, what he stands for...once they have finished reading.  Such is the goal of this autobiography of a young guitar virtuoso who began experimenting with drugs and alcohol by the age of 10, yet still managed to climb to rockstar status, while hiding his addictions until those same addictions, combined with isolation and depression, nearly took his life.  This is the story of how Richard Thomas became Rikki Lixx, found himself a pawn in a self-described "spiritual warfare" between God and Satan, escaped death, and came out the other side as a follower of Christ and happier and healthier than he had been at any other point in his life.

The book starts with Thomas describing his young life as a young kid infatuated by the rock n roll lifestyle of his favorite band, Guns N Roses, while his home life fell apart due to the divorce of his parents and a self-described lack of supervision as his mom worked to support Richard and his siblings.  He talks of being raised in large part by his grandparents who "employed him" around the house so that he could earn money to buy his first guitar, which he soon became obsessed with.  By the age of 10, Thomas had started his first band, Twilight's Misery, and had "started drinking and doing drugs.  On a bad day I would drink close to a gallon of whiskey and a case of beer, not to mention all the drugs I was mixing with the alcohol."  By 11 Thomas had lost his virginity, by 12 he had experimented with cocaine, and at one point, he even went so far as to huff propane from a friend's grill to get high.  He was truly "living the rock n roll lifestyle" before he even reached his teen years!  Thomas looks back now on these incidents and can clearly point to indications of actual spiritual demons at work in his young life, but not having the tools or knowledge to resist the evil they were plying against him.

From there, the book chronicles Thomas's life through special music schools that honed his musical abilities (he had guitar sessions at Berklee College of Music in Boston, the Governor's School for the Arts, CAPA, and others), and his succession of small, local bands, hearing himself on the radio in Philadelphia, and eventually his big national break replacing DJ Ashba (Sixx AM/Guns N Roses) as the guitar player in Operator, a hard rock band with a big label recording contract.  Assuming the name "Rikki Lixx" (suspiciously close to Motley Crue's Nikki Sixx...), Thomas found himself on a national tour and soon falling into the trappings of life as a guitar god rockstar.  But it wasn't until a couple of years later, when he joined Rev Theory, that Thomas's rockstar life would reach its highest peaks and then crash to its greatest depths, as he drowned in an ocean of alcohol, choked down handfuls of pills, and eventually decided to take his own life.

Interspersed throughout with commentary from various people from Thomas's life (M. Shadows from Avenged Sevenfold, Paul Philips and Greg Upchurch of Puddle Of Mudd, Tony Palermo of Papa Roach, Anthony Greve of Pop Evil, Jenna Guns from the Sirius/XM Octane radio station, and many others), Standing In The Fire is not the type of sin-to-salvation book that many are accustomed to reading, most likely.  With language that many would consider to be too coarse, vulgar, or profane (swear words are changed only with the addition of symbols, such as "s*!t", for example), frank descriptions of nudity at the Playboy mansion, and references to infidelity, prostitution, strippers, and obviously lots of drugs and alcohol, this is not a book that is attempting to preach to the choir or save the saved.  Instead, Standing In The Fire is more of a cautionary tale for those who may be desiring the things Thomas describes here, or for those who find themselves already surrounded by the types of depravity outlines here, and an invitation to find a way out before things get as out of hand and as seemingly hopeless as they had become for Thomas.  As such, Thomas outlines how he came to accept Christ as his Lord and savior, how his life has been changed, and how he is now able to see the spiritual warfare that surrounded his life every day while pursuing the life of a national rockstar.

A short book, Standing In The Fire is an easy read (I finished in just under three hours over a couple of days), with only 10 chapters spread across 140 pages.  There are a few minor editorial/grammatical errors, but nothing that is overly distracting, and Thomas does jump around a bit at times, although he always manages to redirect himself back to his original point in the narrative. There are several pages of black and white photos included, as well.

Inexpensive and available in both paperback and eBook form from Amazon, Standing In The Fire is an interesting read, but not for the feint of heart.  While nowhere near as dark or graphic as Nikki Sixx's Heroin Diaries, Standing In The Fire still doesn't pull many punches in its description of the hedonistic, drug-addled life the author was leading, although his story of salvation at the end...along with numerous mentions of his faith throughout the book...is something not found in other, similar books.

Back To Sleazy Readers
Home
Posted by arttieTHE1manparty at 12:39 PM