FICTION SYXX "The Alternate Me" 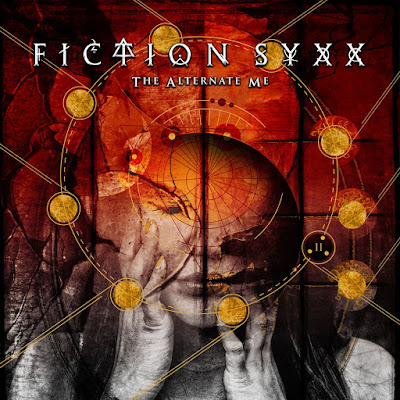 Fiction Syxx returns with The Alternate Me, the follow-up to Tall Dark Secrets, one of 2017's biggest records here at Glitter2Gutter.  Retaining 4/5 of the line-up from that amazing first record, with only bassist Larry Hart (King Kobra/Montrose) being new to the group, the band explodes out of the speakers sounding every bit as energized and electric as they did on that debut effort.  Whether speaking of the powerhouse vocals of Mark Allen Lanoue, or the guitar wizardry of Northrup (Lanoue is no slouch in this department, either, for that matter), there is a musical magic in Fiction Syxx that is simply not found in so many of the melodic rock/metal bands that find their way across my desk and into my CD player on a regular basis.  Perhaps it is the addition of the uber-talented Ragno on keyboards, or the extreme lock-step tightness of the rhythm section of Hart and Faciane, or perhaps it is just the way each of these guys hit on all cylinders together that makes them so special.  Regardless of the recipe, the resulting record is one that has to be heard in 2019!

Blending an obvious love for 70's prog rock and hard rock with modern AOR and melodic rock, Fiction Syxx is an animal unto themselves as far as I can tell.  There really isn't anyone doing what these guys do, at least that I have come across.  From the moment the opening guitar lines of "My Darkest Hour" come sweeping in, it is clear the band is determined to up their game from their great debut.  Lanoue's vocals are even more powerful than they were on the debut, and it is difficult to overstate the greatness of Northrup's fret work.  Fingers are definitely flying on this track, as well as the follow-up, "Monster In The Mist", which combines a great retro vocal style, especially on the backing section, with a more modern melodic rock approach to the guitars.  I especially like Hart's bass work here, as it is given room to be heard in several places on the song.

"Angel Of Mine" leaves the classic rock sound behind for the time being, and steps firmly into the melodic rock arena to great success.  Perhaps not as complex as some of the other tracks here, "Angel Of Mine" has a melodic charm, nonetheless, that is driven by Lanoue's emotive voice.  Ragno's keyboards are expertly utilized in a supporting role here, while the guitars from Lanoue are powerful but not overly dominant.  If any instrument is given special treatment here, it is likely Faciane's drums, with some fancy footwork being required to pull off some of the rhythms he flashes, particularly near the end of the song.  Good, good stuff.

The 70's prog approach returns on the big, bombastic title track, which boasts hints of Kansas, Styx, and Uriah Heep, especially when Ragno interjects his keys into the big solo run that follows the second chorus. Northrup rips off another scorching, extended lead run here, mixing things up with Ragno's keys, and it all works to great effect, as does the catchy, sing along chorus.  Definitely a contender for my favorite track here.  Love this.

"Wind Reminds Me" backs off from the note density of much of the first half of the album, reminding me a bit of Styx's classic "Come Sail Away" in its approach and tempo.  A smooth rocker with plenty of room for Lanoue's vocals to expand, it's Hart's bass that seems to really stand up and grab my attention whenever I give this song a listen.  I'm not sure why, but the older I get, the more I notice the bass work in songs, and Hart definitely delivers on this album.  The guitar work is much more laid back here than on pretty much any other track on the record, although there is still some fairly furious riffing from Lanoue near the end of the solo section before the guitars give way to the percussion work of Faciane.

"Better Part Of Me" deserves some love and attention, as once again Hart's bass work is exceptionally strong, and Faciane's percussion is really given the chance to shine during the verse sections where the majority of the musical work is carried by an understated rhythm guitar and Ragno's keyboards.  I love the fact that this is treated as a band, and not just a project, and that every member gets the chance to contribute and be heard.  This is another place where I think Fiction Syxx outclasses so many of their contemporaries.

"Tall, Dark Secrets" is another contender for song of the album (and it likely wins), as it has such an epic feel to it.  What should have been the title track to the debut album of the same name, "Tall, Dark Secrets" is melodic rock bliss, combining Zeppelin-esque riffing with big, string bending solo work, and an eerie keyboard presence throughout the track.  Lanoue is just spectacular here, his tenor soaring to powerful heights without giving in to the temptation to become over-wrought or self-important.  He never feels like he is saying, "Hey!  Check out these pipes!"  Rather, the sweep of his vocals always blends perfectly with the overall scope of the song he is working in, and "Tall, Dark Secrets" is, for me, the pinnacle of that work here (although is take on a Styx classic will give this song a run for its money...but more on that in a bit).

One other original song that I feel has to be pointed to specifically is "Tragic Magic", which perfectly spans the two cover songs the band chose to include here.  When both covers are taken from the works of 1970's prog legends such as Styx and Uriah Heep, linking them together could be a monumental task if a band wants to keep their album from sounding disjointed.  Enter "Tragic Magic".  An uptempo rocker with a solid dose of 70's fuzz added to the rhythm guitars, "Tragic Magic" is the puzzle piece that fills in the middle section of the really strong second half of The Alternate Me.  Punchy bass?  Check.  Rollicking guitar leads?  Yep.  Some cool slide guitar?  Got that, t00.  Big, sweeping lead vocals?  Covered.  A big, proggy keyboard run?  Definitely here!  Rapid fire drums?  "Tragic Magic" has all of these things, all wrapped up in a song that not only sounds, but also feels like it comes from the same time period as the two songs it bridges together.

As mentioned, the band tackles a couple of classic cover tunes here, and both really shine.  Fiction Syxx's treatment of "Suite Madam Blue" by Styx is excellent, with Lanoue really holding his own on the vocals here, and I dare say I prefer his vocal take to that of Dennis DeYoung (pardon the sacrilege Styx fans).  Likewise, Northrup's massive solo here is an absolute stunner, as are the keys from Ragno, who is absolutely in his element on a classic rock track such as this.  Even Hart's handling of the bass lines here is given plenty of voice in the track (the mix here is spot-on perfection, in my opinion), and Faciane's drums are solid and serve to support all of the greatness heaped upon them.  Despite the fact that this is a cover, it is easily one of my top three songs on the album, which is generally NOT the case with cover songs.  I would think that if the members of Styx were to hear this track, they would have to smile and nod at the brilliant handling of this epic classic.

The other cover here is Uriah Heep's "The Wizard", which is again handled marvelously.  The acoustic guitar intro is perfect, and the leads here are excellent, as well.  In fact, once again, the cover here is practically flawless, with the production again giving it a truly retro feel, but with a crispness and clarity not generally found in 1972.  While not the biggest song on Heep's Demons And Wizards album (that would be "Easy Livin'"), this song fits the scope and feel of The Alternate Me perfectly and is a great conclusion to a truly great album.

I don't own a physical copy of this album, so I cannot speak to the booklet information, but I can say the cover art is pretty cool, and generally, Melodic Rock Records does a really good job with their packaging, so I have a hard time thinking their handling of this record would be anything but top line.

Everything that was great about Fiction Syxx's debut is even better on this record...bigger, faster guitars, more powerful rhythm section work, a more pronounced bass presence, and even bigger backing vocals...to go along with excellent songwriting and production.  Elements of Styx, Asia, Kansas, Uriah Heep, Deep Purple, and even bits of Led Zeppelin are scattered across a sonic landscape that also blends modern melodic rock into a style and sound that I still find myself marveling at after literally dozens of listens.  I truly hope that Fiction Syxx continues on, and hope that somewhere down the line we will get the chance to see the band in a live setting.  I think that would be something to behold!

Rating:  As great as Tall Dark Secrets was, The Alternate Me cranks just a bit harder!  A definite 9 for me!