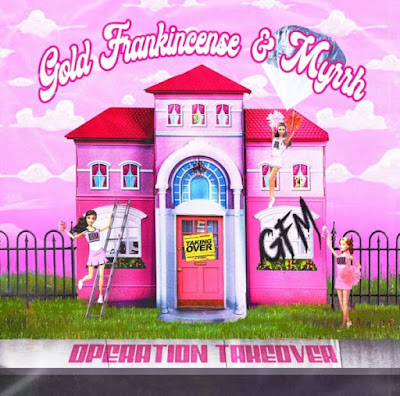 The favorite sister act of modern hard music, Gold, Frankincense & Myrrh (commonly referred to as GFM or GFM Band) return with their third EP in the past two years.  Appropriately titled Operation Take Over, the English sisters continue on their self-appointed mission to do just that, take over, as they unleash six new "Beautycore" songs on their rapid...and rapidly expanding...fan base.  Blending both clean and harsh vocals, huge drums, pulsating bass lines, and aggressive guitars, the sisters continue to carve out a space for themselves in the hard music industry and command more and more attention for themselves not as a novelty sister act, but as a legitimate musical force.

The EP kicks off with "Bones", an aggressive metalcore track that churns and snarls its way out of the gates and never relents!  Maggie's harsh vocals continue to grow in depth and power as she masters control of her voice seemingly with every release.  Complementing the eldest English sister's angry spit-and-snarl vocals are the (by comparison) angelically sweet vocals of CJ, accompanies by backing vocals from Lulu, as they sing their way through the chorus.  To me, the distinctly different vocal styles really set GFM apart from a lot of other bands of the genre.  Sure, most metalcore acts have clean and harsh vocalists, but in no other band do you have that harmonic quality that seems to come from siblings (check out the girls' acoustic EP for even further evidence of this vocal talent).  The guitar riffs from CJ are plenty meaty here, and Lulu continues to be seriously impressive with her work on the kit, growing in leaps and bounds in her ability to create unique and aggressive fills and patterns, not settling on being just the tempo-keeper of the band.  Harsh and aggressive, with a solid breakdown prior to the last runs through the chorus, "Bones" should make an impact at metal radio, both Christian and secular, before this EP runs its course, and it is an excellent table-setter for the rest of the EP.

"Selfish" backs off on the aggression...slightly...as Maggie backs off on her harsh growling for most of the song (she does drop it in in a few places, however), utilizing her slightly lower singing range in the verse portions before her sisters join in on the chorus parts.  CJ's guitars are especially edgy here on this somewhat post-hardcore/modern metal track, maintaining a fuzzy aggression and sharp, snappy rhythms that really push the song.  Maggie's bass has a full, loud voice throughout the track, and Lulu continues to wail away in impressive fashion.  I'm not going to lie, however; I keep waiting for CJ to rip into a fret-running flourish of a solo of pretty much any length, just to add a new depth to the band's sound.  It doesn't have to be some neo-classical, Yngwie Malmsteen fret melter, or an experimental Steve Vai proggy run, but just....something.  I personally think something short and sweet would help the band make that next little jump musically.  But who am I...???

"I Don't Wanna Lost My Friends" is my least favorite track here, but it isn't a bad song.  It just isn't as catchy to my ear and comes off a bit more 90s pop-punk than the rest of the EP.  Gone are Maggie's aggressive vocals, traded in for a poppy sing along chorus, complete with gang-shouted backing vocals, and even some "whoa-oh whoa-oh's" dropped into the mix for good measure.  Again, a special shout out is warranted for Lulu, who really shows an ability to handle multiple types of song structures and percussion patterns, and even if it isn't my favorite track on the EP, the band is really tight here on this bouncy sub-three minute track.

The real treat of the record is up next with "S M I L E".  To my mind, there is no track in the girls' ever-expanding catalog that will generate the excitement in the live setting in the way that this latest single will.  Lulu's snappy drums set the cadence for CJ's saccharine-sweet vocals in a cheerleader chant to

call out "S...M...I.L.E...why won't you smile for me?!" the song kicks off with a crazy fun start before Maggie drops a harsh "GO!" and the guitars swarm to life with thick, chunky riffs and deep, chest-pulsing thuds from the bass as the song melts down into a swirling musical moshpit, even as CJ keeps up her super-cute chant.  As fans know, the girls trademark style frequently utilizes a metal-tinged cheerleader style, and "S M I L E" is the perfect song to accompany that image.  Maggie utilizes both clean singing and harsh snarling on the verse sections, with CJ tackling the majority of the chorus sections.  After the second run through the chorus there's a vocal breakdown with CJ returning to her sugar-coated cheerleader role, this time calling out to ask if everyone is "read-ee" to sing along, only to be chased off by yet another guttural snarl from her older sister.  Again, there is a perfect opportunity for CJ to rip on a quick little solo, but the band instead lays into a crunchy breakdown section, and GFM appears to have come up with their signature song at a relatively early stage in their career, as I don't foresee them being able to sneak out of a live show without dropping this uber-catchy cheerfest into the set!
All cuteness evaporates as "Taking Over" is unleashed next.  Maggie is in full-on "shred my vocals" mode as she barks "One, two, three, four...get up and give me more!", and a big, bottom-heavy breakdown section crushes its way through the middle of the track, with Maggie hammering away on her bass and CJ chug-chug-chugging her rhythm lines in hyper aggressive fashion.  Having already climbed to the peak of multiple hard music and metal charts, "Taking Over" shows as much about the heavy half of the GFM sound as "S M I L E" and closing track, "I Don't Need Your Fantasy" showcase the fun side.  "Taking Over" is who GFM is for a good chunk of their catalog, showcasing aggressive musicality and a vocal duality that goes to great lengths to define who the band is.
On that previously mentioned closer, "I Don't Need Your Fantasy", the girls perfectly meld the fun, catchy sing-along style of "S M I L E"...even again bordering on cheering/chanting...but teamed up with Maggie using a higher-pitched, screaming-rather-than-barking style.  The rhythm riffs from CJ are relentless throughout the track, and Lulu's drumming is tight, furious, and machine-gun rapid throughout.  Truly an excellent way to close out a really strong, if too-short release from this very talented young band.
The band brought in some high-powered help on the production here, as Joey Sturgis (Of Mice and Men, Asking Alexandria, The Devil Wears Prada) was called on, along with Billy Decker (Uncle Kracker, Sam Hunt) and Eric Varnell, to fully capture the sound and style that is Gold, Frankincense, and Myrrh.  Thick bottom end work from the bass and drums really shine through on this record, and the guitars keep their aggressive tone without becoming muddied in the mix, and it is nearly impossible to say too much about how the vocals of the three girls are handled and combined on Operation Take Over.
As is typically the case with EPs, one of my main complaints here is the brevity of the project, with these six songs clocking in at not even 19 minutes.  I was a bit surprised the band didn't include the parody track, "Susan", which they released as a stand-alone single earlier this summer, but it wouldn't have really fit the sound and style of the rest of the EP.  And, with no opportunity to tour during this Covid-induced live music moratorium, the band likely had no new live tracks to tag onto the end, so these six new songs are what we were offered.  Fortunately, all six are of high enough quality that many fans won't feel short-changed paying $15 for the physical CD, which they can also request to be signed if they order directly from the band at:  www.theGMFBand.com
Rating:  Definitely a crankable EP, rip the dial up to 7.5, with only the really small time run and the minor miss of "I Don't Wanna Lose My Friends" keeping Operation Take Over out of 8 to 8.5 territory.  A very strong effort from three impressive young ladies!
Back To Reviews Index
Posted by arttieTHE1manparty at 4:58 PM