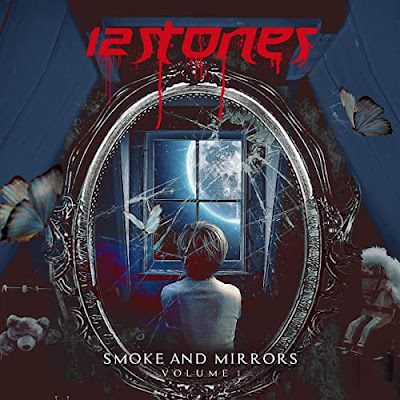 (c) 2020 MTown Records
Paul McCoy--Lead Vocals, Rhythm Guitar
Eric Weaver--Lead Guitar, Rhythm Guitar, Bass, Backing Vocals
Sean Dunaway--Drums
Somehow, for the second straight release, 12 Stones has managed to release an album without me knowing about it.  Granted, perhaps this one is a bit more excusable as it is a digital-only EP, but still, how did I not at least hear about it?  This latest EP, Smoke And Mirrors, Volume 1, has been out since November of 2020, but in today's music world, no singles have received airplay (that I am aware of), and no videos have been made (that I can find), so perhaps it shouldn't come as a shock that I didn't know about this release.  Regardless of if I knew about it, Smoke And Mirrors Volume 1 is here, so what's it all about?

For anyone who may have (somehow) missed them previously, 12 Stones has been together for more than 20 years now, playing an aggressive-yet-melodic form of modern radio rock that has spawned five albums and now two EPs, with 15 singles released to radio, and multiple songs have been used by the WWE. NHL, MLB, NASCAR, and several movie soundtracks.  In fact, during their first decade, it was pretty hard to avoid 12 Stones, as they were seemingly all over the place, with all of their album releases (12 Stones, Potter's Field, Anthem For The Underdog, Beneath The Scars, and the The Only Easy Day Was Yesterday EP) charting in Billboard's Top 200 and all but Anthem For The Underdog charting in the Billboard Top Christian Album's Top 10.  Things slowed down with the band taking a five year recording hiatus...although they still played live shows...returning in 2017 with Picture Perfect, and then again with this latest effort in late 2020.  Since their beginning as a band in 2000, both McCoy and Weaver have been the foundation of the band, with a revolving cast of musicians joining the founding duo.  Drummer Dunaway has been rock solid with the band since 2014, however, so the current version of the line-up has nearly 8 years of chemistry behind them as the band works their way into their third decade as a group.

On this newest EP, very little has changed in the sound and approach that 12 Stones utilizes, although they do add a few new wrinkles to their repertoire.  The album kicks off with the high voltage rock of "In Flames", with its message of frustration with the negativity of the world today.  "We're all just pieces in a twisted game/We won't be happy 'til the world's in flames" McCoy snarls in the chorus, while the second verse intones "We've all stopped caring for our fellow man/To love each other is a cardinal sin".  The bridge section takes this sentiment a step further, as McCoy sings "Divided we stand for nothing at all/United in fear, we'll lose it all" before Weaver steps in and drops a surprisingly hooky guitar solo.  McCoy's rhythm guitars are relentless throughout the track, and Dunaway simply crushes the kit on a song that I really feel should have been all over modern rock and Christian rock radio in 2020, yet was not even released as a single, as near as I can tell.  One annoyance with this track is nearly two minutes of silence at the end of the track.  I mean TOTAL silence.  There's nothing hidden here, just...nothing.  I'm not sure if this was intentional or not, but it is annoying, to be sure.
When the silence finally breaks, the melodic-yet-brooding "Anywhere But Here" drops, with McCoy utilizing some big "whoa-oh-oh" type vocals to open the song and then to exit each chorus.  I really, really like this song which is definitely catchy and hooks the listener from the start.  Dunaway is again a beast on the kit, with a really tight drum roll heading into the final chorus break and some severe abuse of his cymbals throughout.  There are some programmed elements in this track, including what sound like programmed strings to help support the chorus section, and all-in-all, I'd have to say this is one of the better songs 12 Stones has recorded and is one that, again, I have no idea why it wasn't pushed to radio.  For what it's worth, I have told a couple of friends and my wife that the song structure reminds me of a punchier, more aggressive "Kiss From A Rose" by Seal, an while they thought I was crazy at first (they may still think I'm crazy, who knows), they all agreed they could hear what I was talking about.
"Sever" ups the aggression once again, with McCoy's rhythm guitars and Weaver's leads meshing well to power the song forward.  There are some odd effects thrown into the mix that sound a bit...off...for a lack of a better word, but they don't destroy the song.  Weaver drops a really catchy guitar solo, as well, and his growth, as well as the band's incorporation of more solo work into their songs, shows a growth and maturation that a lot of 12 Stones' peers simply haven't achieved.
A perfect example of that is "Gone Away", which is definitely my favorite track on the EP.  What would be considered the EP's ballad, "Gone Away" starts off with a very moody, grungy guitar tone that reminds me of the intro to Nirvana's "Come As You Are", before it moves on and builds into something much more melodic.  The verses are a bit more laid back than the punchy choruses, and the varied approaches work exceptionally well.  "Gone Away" also gives Weaver another chance to really expand his guitar's sound on both the brief solo section in the middle and the expanded closing run at the end of the track.  McCoy backs off of the rasp a bit here, cleaning up his vocals just enough for  emotional effect.
The EP closes on a hard-hitting note, with some hints of nu metal being used throughout "Empty Words" to surprisingly good effect.  Echoing similar themes to the opener, McCoy sneers, "I find myself trapped in this hell, surrounded by empty words and tired excuses" as Dunaway thunders away at his kit and the rhythm guitars chew their way through this edgy rocker.  Weaver utilizes a slightly different approach to his solo section here, but it works, and "Empty Words" finds the band exiting this sub-20 minute EP on a definite high note.
I'm not sure if this was a creative outlet for the band during the Covid lockdowns or if the band is taking the cue of several other bands and plans to release EPs at a faster rate than would likely be possible with full-length efforts.  Regardless, it is a very solid addition to the 12 Stones catalog, although I would be lying if I said I wasn't frustrated that it is currently only available as a digital download.  I have heard rumors of a Smoke And Mirrors, Volume 2 being released sometime in 2022, so perhaps the two EPs will be collectively packaged and get a proper physical release.
I think the production is solid and the mix is very nicely done, which is really highlighted by the separation of McCoy's and Weaver's guitars.  Outside of that quirky (and irritating) 2 minutes of silence after track one, I really don't have any complaints about the production or the layout of the EP.  I have no idea who mixed, mastered, or produced Smoke And Mirrors, Volume 1...perhaps the band did it themselves...but kudos to whomever was at the mixing console.
Rating:  As solid as ever, 12 Stones returns in crankable form with Smoke And Mirrors, Volume 1.  Crank this to a solid 7.5, with only its brevity and digital-only format holding it back from a higher rating.
Return To Reviews Index
Posted by arttieTHE1manparty at 9:39 AM