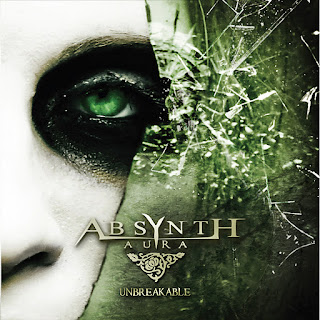 Absynth Aura is a female fronted band from Italy that really has more in common with modern hard rock bands like Disturbed than they do the vast majority of bands found on this review site.   Lacuna Coil, who also hails from Italy, by the way, would be another obvious comparison if you want to take the female lead vocals into consideration when drawing a comparison, and I am sure Evanescence is use by many to describe the Absynth Aura sound.  While there are elements of all of these bands in a song or two, Absynth Aura really strikes me as more, due largely to their intricate song structures and much more distinct guitar sound throughout this album.  Dark and moody at times, generally pretty heavy, and also rather complex on several occasions, the music found on Unbreakable is not what a lot of followers of Glitter2Gutter are accustomed to seeking out.  However, the band possesses an undeniable sense of melody that a lot of modern bands are missing, and there is a definite level of musical talent found in this band that is not present in a lot of others.

On the opening track of this album, I have to admit that I thought Absynth Aura was pretty much in-line with every other modern hard rock band out there now, trying to go for that downtuned, chugging sound that Disturbed took to the top of the modern rock charts so many times, and that bands such as Shinedown molded with a bit more melody in places.  "Believe Me" is a track that, had Klod's vocals not kicked in, could have easily been mistaken for something off of the last two Disturbed discs as far as the style and sound of the guitars. But by the time that song ends and "Desert Flower" kicks in, it should be obvious to the listener that something is different here, and it isn't just Klod's enormously powerful vocals.  Vioni's guitar skills really come screaming through on this track, as the full scope of Absynth Aura's sound can be appreciated starting here.  In fact, if I had my choice, "Believe Me" would have been buried somewhere down in the tracklisting, as it is not really representative of the overall sound of the band.

Complexity abounds on this album, with tracks like "That's Why You Die" and "Unbreakable" both showing some incredible musicianship and songwriting depth. The same can be said of the aggressive "Understand My Fight", which I think is one of the stand out tracks on this album.  The band can do a lot with a less aggressive, less pounding song as well, however.  "Smile" is a track that stands out because of the pop-styled nature of its arrangement and the power which Klod delivers the vocals with.   There is also a soaring, melodic guitar solo on this extremely radio-friendly track.  "Life" is a nice bottom-heavy, groove-filled mid-tempo number that lets Klod stretch her vocal style just a bit.  Album closer, "Zombie" is, as you may have predicted, a cover of the Cranberries song.  Klod's voice fits this track very well but Absynth Aura brings an overall heaviness to the track that was lacking in the original with some furious guitar work that absolutely buries anything the Cranberries did with the song.  I find myself actually liking this version of the song, which is NOT something I can say about the original.

Not everything works 100% of the time.  For example, "Looking For The One" is a big ballad, filled with piano and powerful vocals, but this song falls flat to me compared to "Smile".  It lacks any kind of heft to its sound and really sticks out.   "Fire In My Eyes" has some great musical moments to it, but it is a bit forgettable as it sounds like a lot of other songs that find their way onto modern hard rock stations or Sirius/XM satelite radio.  These couple of misses aside, this is a great record filled with some very powerful musical moments and I think Absynth Aura is a band that people in the modern hard rock world should plan on hearing a LOT about in the near future.  Unbreakable is an album well worth tracking down, even if you are not part of the Disturbed, Lacuna Coil, Evanescence crowd.

Rating:  Crank this to a surprisingly good 7!

Back To Reviews Index
Posted by arttieTHE1manparty at 4:11 PM