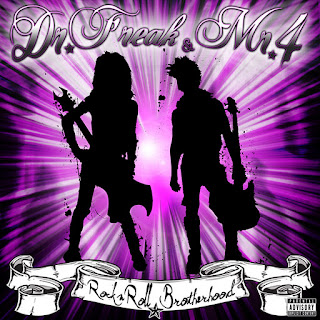 The information in the press release for this album is fairly sketchy about who plays what on this album, but what is known for sure is that Dr. Freak and Mr. 4 are the singer and bass player, repsectively, of the sleaze/horror punk band Superhorrorfuck.  For fans of that band, don't anticipate picking this record up and hearing a SHF album, however, because despite the fact that Dr. Freak's voice is the same as in Superhorrorfuck, low and growling, sounding like he just gargled with shards of glass, there is very little else that will remind of SHF.  This is especially true when Mr. Four steps up to the microphone to offer his own vocal stylings on a handful of songs here; in these moments, there is virtually nothing reminiscent of SHF at all.

Musically, this project is more in the straight-up hard rock and sleaze vein with less punk added to the overall sound, although there are still moments that the frantic pace of Rock N Roll Brotherhood blurs the lines between the full-time band and this side project.  The press releases states, "Rock N Roll Brotherhood will show a new and intimate side of the two musicians, linked to their former life, experiencing an electro-glam rock trend, with forays into pop...".   Ummm...okay...whatever the heck that is supposed to mean.  Sure, there are a couple of tracks that bear more than a passing resemblence to an SHF song.  The title track, "Rock N Roll Brotherhood" is definitely a punked-up sleaze affair that I think was put at the front of the record to kind of ease listeners into this disc.  "Destination L.A." is another tune that carries enough punkish attitude in its style that no one is going to be shocked to hear it included here, although it is far from my favorite track here.  Beyond those tracks, however, I will say there are several songs on this album that would never find their way onto a Superhorrorfuck record.  Such a moment is the ballad, "Farewell To My Muse".  While, lyrically, it still deals with some rather dark subject matter, musically it is far more radio-friendly than anything these guys have released before, actually showing a sense of melody and style that would have placed it firmly in power ballad territory if this was 1991.  "Love After Death" is pure 80's/90's MTV-era hard rock with a simple chord structure and a hooky chorus.  "Jumping Again" is another very 80's sounding track, at least musically, with big drums, a nice guitar hook, and some slick production; Dr. Freak's vocals set it apart from anything you heard in the 80's however, with the exception of some of the stuff you heard from Zodiac Mindwarp and the Love Reaction.  Album closer, "Your Words, Your Air, Your Day", on the other hand, drifts into some electro-pop sounds, especially in the looped drums and keyboard usage, that I have a hard time picturing the members of SHF ever listening to, let alone playing!  Mr. 4 handles lead vocals on this song as well, which gives the track a distinctively different feel than anything recorded by his primary band.

A couple of tracks really don't go anywhere for me on this effort.  Despite the name, the previously mentioned "Destination L.A." really doesn't have anything in common with the L.A. music scene as far as style and sound goes. "I'll Never Forget", ironically, does nothing to make it memorable, so I am pretty sure I will forget this track the second I take the disc out of my player.  And "Masters Of Aesthetics"....well, I just don't get it.  It seems like a decent enough rocker, but it incorporates these weird keyboard in the background that are just annoying as sin, and the lyrics seem tied to pretty much nothing in particular.  Just an odd, odd song....

So what do we really have here?  Well, for me, it was easier to absorb this album on its own merits when I didn't keep refering back to Superhorrorfuck, as there is really very little in common between projects other than a couple of band members.  To be fair, when Rock N Roll Brotherhood is at its peak, I like it a lot more than anything SHF has released as it is not so punked up that it loses its sense of melody.  Unfortunately, this album comes of as being rather disjointed, jumping from style to style so frequently that it sounds more like a compilation album of studio outtakes than a true project album.  That makes it rather distracting and difficult to just sit down and listen to, at least for me, as there is no flow to the record at all.  I guess it says something when my favorite track on the entire album is one that has as much in common with the 80's New Wave sound as it does with glam or sleaze.  To say that I am disappointed would be an understatement, as I was really hoping for the best elements of Superhorrorfuck here, not the most unusual and mismatched.

Rating:  Unless you are a hardcore Superhorrorfuck fan, I'd recommend turning this mish-mash down to a non-intrusive 4.5, pulling out the things you really like and skipping over the rest.