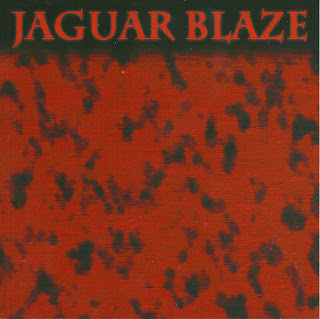 Jaguar Blaze is yet another musical project from Static Fuse/Angry Little Freak main-man Ian Keith Hafner.  This latest effort finds Hafner exploring music in a similar vein as his Static Fuse project, but without the blatant Christian lyrics, although there are still several deeper spiritual moments on this record, just not on every track.  I have heard/read a few people comparing Jaguar Blaze to bands like Def Leppard, Skid Row, KISS, or Ratt, but I don't hear that at all (with one exception).  This music is far more blues-based than those bands with nowhere near the pomp of KISS or the pop of Def Leppard.  If you are into that grittier, mostly mid-tempo hard rock sound of the 1980's (not hair metal, but more guitar-driven hard rock), there is a lot to like about Jaguar Blaze.

This time around, Ian handles everything himself, from vocals to guitars, bass, and drums.  It is a massive undertaking, to be sure, and I think Hafner acquits himself pretty well for the most part.  His guitar skills have never been in question, at least to my ears, and the solo on album opener, "Wild N' Free" is a testament to that.  One of my personal faves from this album, "Streets On Fire", is another great 80's-inspired blues-based hard rocker with some great licks and a nice, catchy hook.  This is the kind of song that bands like Keel, Leatherwolf, Vyper (if you have heard them), and even early Great White were playing a couple decades ago.  The big budget production is obviously not there, which is most notable in the drum sound, but you can definitely hear bands such as those performing "Streets On Fire" or the equally rocking "Into The Sun" back in the day.  "Into The Sun" is another song that has a great guitar solo in it that I would LOVE to hear with a big production budget behind it.  The same can be said of album closer "Lonely Road", which is the one song that I would say does have a Ratt feel to the music, carrying a similar tone and feel to "Back For More" on the main guitar riff.  "Standing Next To You", on the other hand, has a truly classic rock feel that has a more late-70's feel than the rest of the album, at least to these ears. "Heartbreak Style" is another pretty cool mid-tempo rocker with a nice guitar-and-drum breakdown section right before a quick solo that leads right back into the chorus.

Vocally, I have to say that the way Ian uses his voice is eerily similar to Layne Staley of Alice In Chains at times, especially when he is providing his own backing vocals.  This is especially evident on "Into The Sun".  It is not this apparent throughout the entire album, and the music isn't grunge by any means, but I have to say the vocals, especially on the pre-chorus, FREAKED ME OUT!  I get that Ian's voice is not going to be everyone's cup of tea, and that's cool.  However, I do know that he has put a lot of effort into his vocals and there is a clear growth here, especially for people who are familiar with his earlier work.

The real downfall of this record, or any indy project for the most part, is always going to be in the production, as big, pounding drums and a really bright mix can cover up a lot of weakenesses in any band.  Don't believe me?  Remember some of the concerts you went to in your younger days when you asked, "is this the same band?!"  The guitars are a bit low in the mix in spots, and, as I stated before, there is a definite lack of a real drum presence here.  I am not sure if this is a programmed drum or not (I don't think it is), but just a beefed up bass drum would make a world of difference for a lot of listeners.  On the flip side, there is a certain charm in indy projects where it is just the artist, his instruments, and his talent on display without a bunch of wizardry on a mixing board to change the outcome of the product.

A cool touch here is in the packaging.  The front insert is plastic, not paper, which I thought was pretty cool.  I don't think I have ever seen that before, and if I have, I don't know where.

Overall, Jaguar Blaze is likely to appeal to those who understand indy hard rock is not about overblown arena sounds but more about feel and attitude.  Is this my favorite album to come out so far in 2012?  Nope, but I wasn't expecting it to be, either.  It was exactly what I figured I would get...solid songwriting, above average guitars, much improved vocals, and a gritty, honest performance from a guy who works very hard at his craft.  Again, if you like the style and sound of his main band, Static Fuse, you are likely to find a LOT to like about Jaguar Blaze.

Rating:  Rock this to 6, which is pretty solid for an indy project such as this.

Back To Reviews Index
Posted by arttieTHE1manparty at 4:14 PM