SANTA CRUZ "Anthem For The Young And Restless" 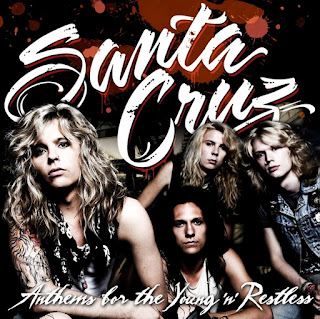 (c) 2011 Independent Release
Archie--Vocals, Guitars
Johnny--Lead Guitars, Backing Vocals
Middy--Bass, Backing Vocals
Taz--Drums, Backing Vocals
About two years ago, or so, I received a demo/EP called Another Rush Of Adrenaline from this band from Finland that really piqued my interest.  They had a great look, a really good sound, and a small handful of decent, if not spectacular, songs.  I thought if they could manage to score a label deal somewhere and maybe get a hold of a big name producer they could put out a really solid album.  Well, Santa Cruz has returned with a new EP that kicks the teeth in on their demo...and they still have no record label, no big name producer, and virtually no distribution, which really sucks because this is an album that needs to be heard by fans of the big hair 80's.  This album actually made me rethink my Top 11 of 2011 as it wormed its way onto that list.  This is just a great, great album that is worth seeking out.
Lead vocalist, Archie, is going to remind a lot of people of a younger Sebastian Bach with his vocal approach, as he rips off some killer screams, evidenced on nearly all of the fist pounding, head banging numbers, but is also capable of employing an above average singing voice, as he shows on the more-mid-tempo-than-lighter-in-the-air ballad, "Don't Run Away".  He and Johnny, who started the band together in 2007, are a far above average guitar tandem and rip their way through these tracks with the skill and chops of people twice their age and experience.  As such, it is on the smoking uptempo numbers that Santa Cruz really shines, although even when they choose to slow things down they aren't too shabby, either.

From the very first riff of "Over The Limit", it should be obvious to most listeners that Santa Cruz is the real deal.  This is a band that is steeped in the glam and sleaze of Hollywood tradition from the late 80's, but they also mix in the flash and style of what I call the NWoEGaS (New Wave of European Glam and Sleaze).  I don't care if you are a fan of Faster Pussycat and Babylon AD or Pussy Sisster and Babylon Bombs, you are most likely going to be slamming your head and pounding your fists to "Anthems For The Young And Restless" or "Let's Get The Party Started".  After the slowest track, the previously mentioned "Don't Run Away", this album returns to the high octane stuff, although just a bit slower, though just as heavy and energetic.  The closing tracks are every bit as good as the first three, with "Hostile Shakedown"being a really strong hard rocker, and "We're Aiming High", also a top notch rocker, hopefull being an anthem of sorts for this band that really deserves some kind of label notice for their next effort.

One piece of advice, however...I don't think this is the greatest CD to listen to while driving because you will soon find your foot clear through the floor doing about 110 m.p.h., as these songs just get you going that well.  Seriously, this is a ferocious little disc chock full of huge solos and monstrous, heavy riffs.  But to top it all of, you can't escape the power of Archie's wailing, screaming vocals that, in addition to the aforementioned Sebastian Bach, also remind me a lot of Kingpin/Shotgun Messiah when Zinny Zan was the vocalist...only with better overall guitar sound.

I have heard there is a 10 song version of this CD out somewhere, but I have never found it and have to wonder if it isn't a bootleg.  While I am not a fan of bootlegs, I can see why someone might try to bootleg this CD, because it is INCREDIBLY hard to find...and it is that dang good!  If I find out if the 10 song version is legit, I will be sure to pass on ordering info.  For now, however, the only place I know of to get this is from a Finnish site you can access here.  I have used this site myself, and have never had any problems, so I wouldn't hesitate to order this little gem.