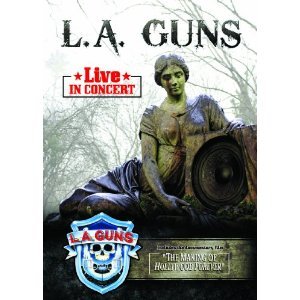 Filmed in 2012 at the M3 Festival in Maryland, LA Guns: Live In Concert is an interesting collection of live material, studio videos, and studio outtakes from the making of the band's most recent album, Hollywood Forever.  The set-list is a bit unique, as it includes the band's best known songs such as "Sex Action", "Electric Gypsy", "Rip N Tear", and of course, "The Ballad Of Jayne", while also managing to mix in a few of their more recent tracks, with a pair of songs from Hollywood Forever, and one, "Revolution" from the Waking The Dead album.  I realize that a festival requires a rather condensed set-list, and omissions are often required, but I would have thought the band might have included a couple of their more popular songs, such as "Kiss My Love Goodbye", "No Mercy", or "Some Lie For Love"...or possibly even "It's Over Now" or "Beautiful" in place of "Revolution" and the over-rated (my opinion) "Sleazy Come, Easy Go".  Again, these are songs I would have rather heard, especially since "Revolution" isn't even the strongest song on Waking The Dead, but sacrifices to have to be made to fit into a time-slot.

As such, it is also a good thing that LA Guns decided to include the rest of the material here, as it would have been a VERY short DVD with just the live material.  So, as a bonus, we are treated to three studio videos and several outtakes from the making of the Hollywood Forever album.  The videos are cool, and I enjoyed watching them, but to be honest, I have never been much of a fan of these "making of" segments, as they are quite often just strung together stories and outtakes with little rhyme or reason given for their inclusion.  Yeah, some of these stories are humorous and good for a one-time viewing, but I can honestly say that I won't likely watch them again.

There is one thing LA Guns does that I wish EVERYONE would do when putting together a live DVD like this (ATTENTION ALL BANDS:  READ THIS)....THEY INCLUDED A LIVE CD OF THE CONCERT AS WELL!!!  This is one of my biggest pet peeves when it comes to packages like this because I am a music LISTENER, not generally a watcher.  I like to be able to take the music with me wherever I go.  Sure, I know, I could rip the audio tracks, but why waste the time and effort?  This is something all bands should do, and I for one truly appreciate the little bonus that LA Guns threw in here!  Nice touch!  Kudos!

The sound quality and video quality are excellent with the exception of Phil's voice being a bit buried in the mix at the beginning of "Sex Action".  This problem is quickly sorted out and the rest of the CD/DVD sounds great.  Lewis' voice is still strong, although some of the upper range may have disappeared from "The Ballad of Jayne", but this is not a distraction at all.  Also, it is nice to see this incarnation of the band one final time, as Stacey Blades has, of course, moved on from the band.  The band seems to be enjoying themselves, despite a somewhat lackluster crowd at times.  I have no idea what time the band went on, so they may have been warming things up...or the crowd may have already been worn out.  Regardless, this is not an issue for me, as I personally get annoyed when the crowd is so loud on live albums that the band can't be heard very well.  I know, I know...I'm pretty picky about live albums.

This is an overall strong DVD/CD package from an underappreciated band that continues to perform to a high standard and keeps releasing quality material.  The song selection could have been a bit stronger, to be fair, and a few of my faves are missing, but overall this was an enjoyable set.  I'm still waiting for the next studio album, so this live CD will help to tide me over until then.

Rating: Rock this at a solid 6.5, especially since the CD was included as well!


Posted by arttieTHE1manparty at 8:01 PM