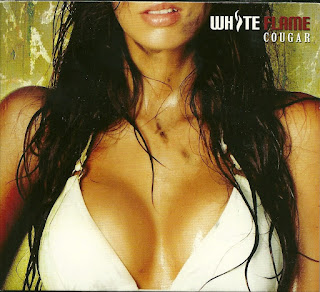 Additional Musicians:
Chris Laney--Backing Vocals, Producer
Hanna Henrikson--Backing Vocals
﻿
Yeah, the woman on the cover...or what you can see of her, anyway...is smoking hot.  But, as I always say about music, it doesn't matter what's on the outside if what's on the inside is crap.  Fortunately, that is not a problem at all with White Flame!  The music on this project is top notch, with great performances across the board, and some excellent production to keep the sound tight and crystal clear.

Things start off with the rocking"Get What's Mine" which, I will admit, threw me for a bit of a loop when the vocals kicked in.  Why?  Because Vince sounds so much like "Symphony Of Destruction" era Dave Mustaine that it is almost frightening!  Seriously, if MegaDave ever loses his voice but still wants to tour, Vince is his man!  The music is not even remotely thrash, however, but is a great updated take on 80's melodic hard rock, complete with a tasty guitar solo, solid bass work, and some nice, tight drumming to drive the track.  Follow-up track, "I Know Where You Live" is the lead single from the album and features some nice "talk box" guitar work...and more of those eerily Mustaine vocals on the verses followed by far more melodic singing on the chorus.  It's an odd dynamic, to be sure, but it works well for this band and really serves to set them apart from so many other sound-alike indie bands that are fighting for attention.

Things slow down for the first time with "Make Believe", which has something of an Aerosmith vibe to the approach, recalling a song like "What It Takes" without coming across as a rip-off.  "Stay" is the other ballad on the album, this time going for more of a melodic rock feel than the bluesier approach.  Vince shows that he is able to sing as well as he snarls, especially on the big chorus, although he will never be mistaken for a truly melodic singer like James Christian (House Of Lords), or Jeff Scott Soto or anything.  Anthon also lays down some nice power-ballad inspired guitar work here, especially at the end of the track.

The previously mentioned Aerosmith feel is actually one that is scattered across the whole of the album, showing up again on the rollicking title track, "Cougar", as well as "We Get It On", which may be the strongest original rocker here.  There is also the possibility that "Gutted" would contend for that title as well, because this is another excellent up-tempo number with a great hook and some of Vince's strongest vocal work with the singer using a raspier snarl that I think is the sound he should approach for the entirety of the band's next album.

A couple of funky numbers worm their way into the mix here, both of which are tied together with the word "girl".  "What Girls Like" and "Used To Be A Girl" both have a feel to them that is not unlike some of the tracks that can be found on Extreme's Pornografitti album (minus the horn section).  Vince's vocals here take on a Mike Patton (Faith No More) quality in places, especially on the chorus section of "What Girls Like".  From here, the band jumps back into a more straight ahead hard rock territory as Sammye gets to intro "Right Back In" with his bass rumbling it's way out front on yet another top-notch rocker that this band pulls off so well.

While "We Get It On" and "Gutted"...and possibly "Right Back In"...slug it out for best original number, I have to say that they are fighting for best overall track with a cover tune, which is a total oddity for me to say.  However, the show stealer here is very possibly the rocked up cover of Roxette's "The Look".  Yes, you read that right.  I was skeptical at first but I have to admit I absolutely love what the band has done with this track and feel that it is expertly performed and a lot of fun to listen to.  Faithful to the original, but given a grittier, dirtier edge, the band doesn't try to reinvent the track, but they do take ownership of it, especially in the guitar department.

One hiccup keeps this album from being an absolute knock-out, but fortunately that blip is left at the end of the disc.  I just can't get into "Questions" at all.  It doesn't fit anything else on the album vocally, musically, stylistically...in any way, actually.  I don't necessarily think it's a horrible song, but I don't know why it's here.  It's too poppy for the rest of the material here, with no edge to the music at all.  Very generic sounding, it comes off as a stab at Top 40 rock radio...if Top 40 rock radio still existed.  Again, the positive here is that it is at the end of the album and can either be tolerated or easily skipped.

Yeah, it's a digipack, so I can't say I love the packaging, but the insert contains full lyrics, so the positive and negative points there are a wash.  I would have liked a few more pictures of the band (and maybe a couple more of the cover model!), but, again, it's the music that I am after here, and White Flame definitely delivers in that department.  Make an effort to track this one down, folks...White Flame has a winner on it's hands here!

Rating:  Crank this one every time you pull it out!  7.5 should be a nice dial setting for Cougar, and I anticipate White Flame will go nowhere but up from there!

Back To Reviews Index
Posted by arttieTHE1manparty at 10:30 PM