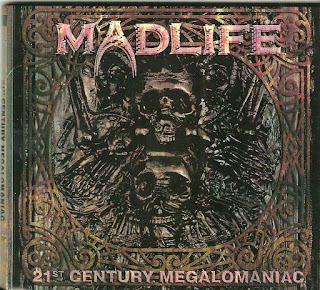 Hard rock of all sorts shows up in my mailbox, with everything from the "Glitter" of glam to the "Gutter" of sleaze, and pretty much everything in between.  With 21st Century Megalomaniac, Madlife delivers the first industrial metal album to find its way onto the review stack in quite some time.  Most of the previous efforts have missed the mark pretty badly and were not really worth taking the time to review, as everyone seems to try to sound like Rob Zombie these days.  Madlife is a bit different, however, and managed to catch my ear in a way the others had not.

Apparently this is the fourth release by this band, although I had never heard of them previously and the line-up of the band has changed at least once, with Angry Phil and Isaiah being the original, founding members of the unit.  Again, as I had never heard the band previously, I have no idea how they sounded before but I can tell you that Pagan and Cunningham are absolutely locked-in as a rhythm section, providing some throbbing bottom end to the aggression poured forth in Angry Phil's lyrics, and giving a crushing underbelly to Isaiah's excellent guitar work.

Now, as I stated, Madlife caught my ear as attempting to separate themselves from the Rob Zombies/White Zombies and Nine Inch Nails of the world, but it isn't because the music is something altogether different.  Indeed, there are going to be some musical comparisons, but there is a progressive element here that is not found in a lot of what is now referred to as industrial rock, and the songwriting is much deeper than the horror movie schlock that Zombie has churned out over the past few records.

Take for example the album's opening cut, "Just One Gun".  What is unique about this track is the fact that it sounds like it is written from the standpoint of the gun, not the person using it.  The gun explains that it is simply a tool in the hands of a man and that the gun has no agenda of its own, positive or negative. Pretty much a perfect, "guns don't kill people, people kill people" statement if I have ever heard one, all set to a pummeling-yet-slam danceable rhythm and interlaced with electronic sounds and some chugging rhythm guitar work provided by Isaiah.  Angry Phil's vocals are...well...angry, but every word is understandable and delivered in a snarl that is perfect for the urgency of the music.  The song lacks a guitar solo of any kind, but there is something akin to a metalcore breakdown, albeit more of an electronica-influenced breakdown.

"To Live And Die In Hollywood" is another angry bone-crusher that finds Angry Phil sounding a lot like Alice Cooper at times, focusing on loneliness in the middle of one of the biggest cities in the world.  This song reminds me of something Stabbing Westward would have done about ten years ago, but with thicker, heavier production and a collection of shouted "heys" in the background, incorporating a sense of arena rock to the industrial bullying this track puts forth.

I'm not a fan of how "I Know The Feeling" starts off, with an echoing keyboard effect kicking things into gear, but once the drums and guitar kick in, things are back on track.  Again channeling a bit of Alice Cooper, Angry Phil uses a bit of a cleaner vocal approach in spots on this track, although the aggression isn't lost.  Again, Stabbing Westward would be my point of reference for this song, not Rob Zombie, in this track about depression and battling one's own inner demons.

"Pain Of Pleasure" sounds to me like something that might be heard to come blaring from an industrial dance club, as a very catchy rhythm is incorporated throughout the track, pushing this one more into the NIN territory that some people will want to lump
Madlife into.  Phil's vocals are tainted a bit with some effects which took me a few listens to get past, but they aren't unlistenable, either.  There's also a weird, almost empty spot where a lot of rock songs would incorporate a guitar solo of some sorts, that I am not a fan of.   Definitely not my favorite of these five tracks, but not a skipper for most I would suspect.

The stand-out cut, especially from a writing standpoint, would be "Still Alive" which is a very dark, moody track that continues with the EP's common thread of pain, emptiness, and inner demons.  This is one of the two slower numbers on the album, but by no means is this to be considered a ballad, as power chords are present throughout the track.  I'm not sure what the chanting vocals say at the end of each chorus (there are no lyrics included here), but they add an ominous feeling to the music that throbs over the electronic drumbeats and sampled electronic sounds.  Angry Phil once again finds himself in Brutal Planet-Alice Cooper mode vocally, which he pulls off effortlessly and with great effect.

The album is short, clocking in at just under 20 minutes, but it leaves the interested listener wanting to hear more rather than feeling like they have been drug through a bloated soundscape that seemingly has no end.  Would I have liked to have heard more here?  To be sure, but only if the additional tracks fit the style, theme, and most importantly, the QUALITY of the five tracks assembled here.  Yes, I would love to have some ripping guitar solos, or at least a crushing breakdown, instead of the electronic sampling that riddles most of these songs, but you have to take the album for the style that it is presented in, not the style you wish it was.  With that in mind, this independently produced project is a stand-out among the others I have received of this style, and I would take this over anything Zombie-related since  Astro-Creep.  Again, I find these guys to have more in common with Stabbing Westward than anyone else, but perhaps I am the only one who remembers that band well enough to use them as a point of reference.

Packaging is of a bare minimum here, as the EP comes in a digi pack with no interior pictures, liner notes, or even band contributions (I had to track down who played what on-line).  The mix is very clean with nice separation of the instruments, and the production is powerful and without distortion.

Rating:  Not my typical listen at all, but definitely of higher quality than most albums of this type.  If industrial is your thing, crank this to a 7.5.

Back To Reviews Index
Posted by arttieTHE1manparty at 12:00 PM