LIBERTY N JUSTICE "4 All: The Best of LnJ Volume 2" 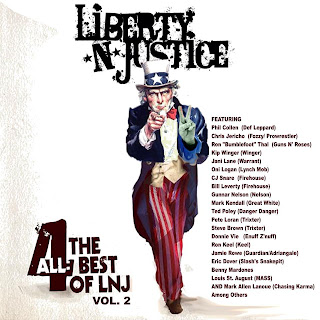 (c) 2013 FNA Records
**New recordings featuring Liberty N Justice band members Justin Murr, David Cagle, and JK Northrup, with Eric Ragno on Tracks 2 and 3
Considering they have never had a "hit", it's interesting that Liberty N Justice has put together their second "Best Of..." package.  However, don't let the fact that current radio stations are ignorant of quality melodic hard rock make you think there is no reason to pick up this excellent collection because that would be a big mistake, especially for people just now getting into the band.
As most people know, LnJ has long been known as an "all-star project" more than as a band.  This has been both a blessing and a curse, as it has allowed Justin Murr to get his message and his music out to people, but it has also led some people to question the validity of the project.  Foolish, I know, but those are the facts.  However, people who pick up this latest package will find themselves treated to the first four tracks to feature Liberty N Justice, The Band, as the four new songs here all feature founding member Justin Murr on bass, David Cagle on vocals, JK Northrup on guitars and drum programming, and Eric Ragno on keyboards on tracks 2 and 3.  (LnJ drummer Michael Feighan will appear on the band's first full-length project next year).

For people already familiar with the "all-star" releases, the real treat of this collection is the first four tracks on the disc.  Things kick off with the mid-tempo, acoustic-based "No Honor Among Thieves", which really showcases the slightly smoky vocals of Cagle and a scorching, if short, guitar solo from the massively underrated musical talent, JK Northrup.  Its a bit of an oddity to start off an album in acoustic fashion like this, but as an introduction to the band, this is a nice start as no one member is overpowered by the others.

My favorite of the new tracks, "Grace and Gravity" follows up and features the quirky, humorous lyrical style that Murr often throws into his songs.  Need an example?  Check out the opening line"

Don't let that little chuckle of a line throw you, however, as the spiritual base behind Murr's lyrics remains fully intact on this, and all the songs here.

"Memphis" comes up next and has a slightly more modern rock feel to the music, especially with the guitar tone, but the vocal delivery and the songwriting style are pure melodic rock.  Once again, Cagle's moderately gritty vocals really add depth to this track, and Ragno's keys add to, rather than distract from, the song by remaining a contributing instrument instead of the dominant piece of musical equipment on the song.  Northrup again erupts with a blistering solo run that is just too teasingly short for me...oh, and Murr plays bass nicely!

"Lost And Found" was the hardest of the new tracks for me to get into musically, but lyrically it may be my favorite of the new material.  This ballad reminds me of the material found on the Chasing A Cure EP, a bit more laid back and "adult contemporary" in approach than the other new material. After repeated listens, the track really has grown on me, although it was never "skip material" to begin with.
As far as the older material, this collection is every bit as strong as the previous "Best Of...Volume 1" was, especially with the inclusion of "The Greatest", "Cut Me Mick", "Cupid's Gonna Bleed" and "Sin", four of the best tracks the band has ever recorded, in my opinion.  Only one cover song from Cigar Chronicles Volume 1 made it onto this collection, but it is the very nicely done acoustic version of "Stayin' Alive" that Kip Winger performed.  I was also very happy to see the inclusion of "Show Me The Way", featuring Oni Logan on vocals, and the underrated "Fade", which has Jamie Rowe of Guardian/AdrianGale on vocals.  With songs gathered from previous LnJ albums Soundtrack Of A Soul, Independence Day, Light It Up, Chasing A Cure, Hell Is Coming To Breakfast, and both volumes of The Cigar Chronicles, this collection packages together an excellent grouping of vocalists and musicians that, along with the first "Best Of..." package serve as the perfect introduction to this band.  No remixes or demos find their way onto this package, which is actually a benefit for new listeners who may be using 4 All...Volume 2 as a sampler for future LnJ purchases.
For anyone wanting to get a taste of what Liberty N Justice is all about, adding 4 All...Volume 2 to their purchase of 4 All...Volume 1 is the best way to go, as it gives the new fan a broad scope of older material along with exclusive new tracks that are not found on the other records.  For those of us who have been along for the ride the entire time, 4 All...Volume 2 provides an introduction to Liberty N Justice...THE BAND...whetting the appetite for fans who think that next year is simply too far away to wait for new music!
Rating:  Every bit the match of the first collection, and maybe a tad bit better because of the "band" songs, crank this one to 7.5!
Back To Review Index
Posted by arttieTHE1manparty at 3:00 PM