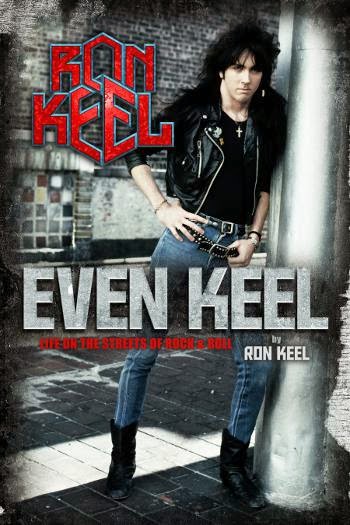 When I had the chance to talk to Ron Keel last summer, he told me he was in the process of putting the final touches on his autobiography.  I told him to be sure to let me know when it was done, as his was a story I was interested in reading, as KEEL has long been a band that I have enjoyed and always felt was just a break or two away from becoming full-fledged stars.  About three or four months after that conversation, I again had the chance to talk with Ron when he came to our SkullFest Festival in North Platte, NE.  He told me at that time that he thought he probably had enough material for two or three books, and that some editing had been done to the autobiography he had been working on, but that it was basically done.  Fast forward just a couple of short months more, and Even Keel arrived in my mailbox, along with Ron's solo album, Metal Cowboy, and a couple of guitar picks.  Needless to say, I dove right into the book, reading it from cover to cover in a matter of just a couple of days.

The book covers pretty much every band that Ron has ever been a part of, from his very early days in the Arixona music scene, to his trip to the Sunset Strip of Hollywood, first with Steeler, then with his own band, Keel, to the southern rock stylings of Iron Horse, the country rock of the Rat'lers, and the metallic approach of Japanese band Sabre Tiger...along with various other side projects, tribute acts, and other musical ventures, from rock to country, along the way.

Ron takes the reader on his musical journey, giving his insights into the lifestyle of the dang-close-to-rich-and-famous.  He doesn't pull any punches about his involvement with alcohol, drugs, willing groupies and multiple wives, yet he also doesn't go out of his way to push an agenda, hurt anybody, or throw anyone under the bus.  He discusses the ups and downs of his relationships with guitar heroes Yngwie Malmsteen, Marc Ferrari, Bryan Jay, and Japan's own guitar god, Akihito Kinoshita.  Ron talks about his brief flash of potential fame at the helm of Black Sabbath, his encounters with Gene Simmons, and how he found himself in the world of professional impersonators as part of a Brooks & Dunn tribute show.

Throughout it all, Ron Keel manages to show humility and humanity, never coming across as bitter, even when it seems he probably could have.  Instead, Keel comes across as thankful for the multiple opportunities he has been given (or made for himself), and positions himself for his story to be one of inspiration and determination rather than failure and letdown.

There are not a lot of pictures in this book, and those that are here are black and white.  Keel uses lyrical snippets to introduce chapters throughout the book, giving the reader a look at where Ron's head was when he wrote these songs or where he drew his inspiration from.  There is also an extensive discography at the end of the book, giving the reader plenty of material to seek out for their own collection.

There are a couple of spots in the book where, to me, it seems obvious that he edited material out, possibly for another book, as there are some minor stop-start jumps, but these are only minor distractions, and perhaps others won't even notice them.  Additionally, I do with there was a hardback version of this book, as I far prefer hardback to paperback, even when the paperback version is full-sized.  These minor issues don't take away from the readability of the book, however, and Keel's is an interesting story to be given the chance to be a part of.  Written entirely by Keel himself, with no ghost-writer or co-writer mentioned, I strongly recommend the book and look forward to any follow-ups that Ron may come up with.

Posted by arttieTHE1manparty at 3:52 PM