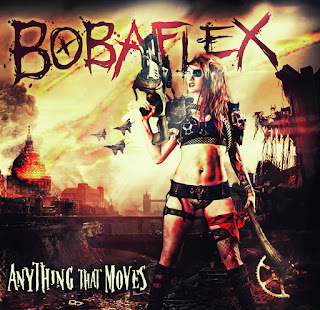 It has only been two short years since Bobaflex released Charlatan's Web, but in that time, not only was a tour completed and a new album written, but two new members joined the Bobaflex fold, as well.  Anything That Moves is the first album to feature new guitar player, Dave Tipple, and new bassist, Jymmy Tolland, and while some may argue that the two latest additions have sparked a new intensity in the band, don't expect anything drastically different from the modern rockers.As with their last couple of efforts, Bobaflex's sound continues to be driven by their occasional usage of spaghetti Western-styled musical interludes and imagery ("Bury Me With My Guns On"), unique rhythms, and darkly humorous lyrics ("I'm Glad You're Dead"), all while keeping their tongues planted firmly in their cheeks with a wicked grin spread across their collective faces.  Don't come here looking for synthesized string sections, huge breakdowns, or dub-step styled backing tracks, as you will be sorely disappointed if that is what you are after.  However, if you are after a hard-rocking, hell-raising good time from some of the nicest (sorry to ruin the image) guys you will meet in the business, then Bobaflex and Anything That Moves will be right up your alley.

The new record starts off with a throw away intro...we all know I hate intros...but at just 30 seconds, "Burn Them All" isn't an overly huge annoyance at the outset of this new record.  Things really get going in a big way as soon as "Start A War" kicks in with crunchy modern hard rock guitars, a catchy, sing-along chorus, and those brotherly harmonious vocals that make Bobaflex's sound unique.  "Lose Control" follows up nicely with another rocker, before one of my favorites here kicks in, with "Dry Your Eyes".  If you were a fan of that Western-styled approach I mentioned before, a la "Bury Me With My Guns On" (which is my favorite 'Flex track ever), you are likely going to dig "Dry Your Eyes" as that same approach is used, yet the song does not come off as a clone.

The album's lead single is the humorously (at least to me) titled "Mama (Don't Take My Drugs Away)", which is a solid mid-tempo rocker that has a big hook and more of those harmonies from the McCoy brothers that are such a trademark part of the band's sound.  While not necessarily my favorite 'Flex track, it is definitely a very good one that will likely find its way up the hard rock charts at both satellite and terrestrial radio.  "A Spider In The Dark" has all of the moody creepiness that the title implies and is another of my faves here.

Things hit a bit of a "samey-snag" on the next couple of tracks, as both "Show Me" and "Objectified" feel like album cuts from records past, and while neither is horrible, they don't really do anything to push the album forward, either.  The last three tracks are nearly as solid as the first three (again, excluding the intro), and round out the record in solid fashion.

It's hard for me to believe this West Virginia band has had seven albums now, but even with the line-up changes I mentioned at the beginning of this review, the McCoy Brothers and company show no signs of slowing down.  Anything That Moves isn't earth-shattering, but it is a lot of fun, and minus a couple of semi-off moments, may just be the best these guys have put out, even with the changes.

If you get the chance, check them out live, as they put on a heck of a performance, regardless of the venue size and, as I mentioned, are very nice guys to meet.  Hopefully, I will get the chance to take in a show with the new members soon, and I look forward to the inclusion of "Mama", "Start A War", "Dry Your Eyes", and probably "Forgiven" or "End Of The World" in the live show!

Back To Reviews Index
Posted by arttieTHE1manparty at 7:08 PM