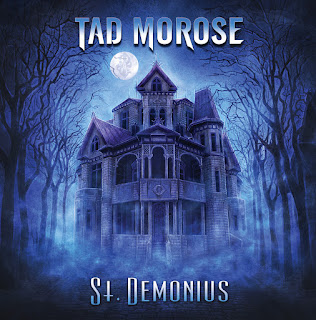 A band of Swedish metalheads, Tad Morose, is a band that I have always heard OF, but have never heard until this album.  I'm not really sure why I never looked into them, but their latest album, St. Demonius, which will be out in late August, will definitely having me seeking out some of their catalog material.

I've often heard the band compared to Iced Earth, which I can hear a bit, as Hemlin does have a Barlow/Owens quality to his vocals, although he doesn't sound like either man, at least in the clone sense.  And, much like Iced Earth, there is a speed element at play on many of these tracks, and the powerful drumming is reminiscent of IE as well.  But the comparisons end there, at least for me, for a couple of reasons.

Firstly, Tad Morose has more tempo change within songs than is typically found in most Iced Earth songs.  Take for example the opening track, "Bow To The Reaper's Blade".  Within this one song we have multiple time changes as the band comes out full-speed ahead, with blistering double kick work going on and some fret-melting rhythm guitars as well, but even before we hit the minute mark on the track, the pace slows WAY down to a plodding pace, allowing Hemlin's vocals to powerfully soar across the chorus, only to find the track kick-starting itself in identical fashion to how it initially started.  It's never speed-for-speed's-sake here, although that doesn't mean the songs lack in speed, power, or heft in any way.  "Black Fire" would never be mistaken for a speed metal track by any stretch of the imagination, but there is a power and diversity in the song that reinforces the creativity behind this band.  Perhaps this is a by-product of several members coming from other European power metal bands and bringing their own individual style and sound with them, then pouring it into the smelting pot so that a different type of power metal can be poured out.  "Day Of Reckoning" is another track that utilizes slower, yet crushingly powerful chords in an almost doomy fashion, without ever becoming bogged down in the sludge of too much down-tuning in the guitars or mind-numbingly slow riffing.

Secondly, the lead guitar work is more interesting overall in Tad Morose, at least on this record (which I have also been told is one of their heaviest).  I like what Iced Earth does, and there is no denying that Jon Schaeffer is a MONSTER on rhythm guitars, but I have to admit to feeling that, at times, the leads lack a lot of creativity, and serve more as a way to get from chorus to chorus so that the pure aggression of Schaeffer can rear its metallic head.  Not so with Tad Morose.  Each of the tracks on St. Demonius has a carefully crafted guitar lead that sears through the middle, along with some scorching outro work as well.   Look, I'm not taking anything away from IE here, as I love that band for what they do, as they do it better than pretty much everyone:  they rip your face off with speed and aggression in the rhythm guitars, while whatever power-screamer they have incorporated into the band chews away at what is left of your eardrums.  And I love it!  But with Tad Morose, you get a similar ability to charge through a metallic storm, such as in the scorching "The Shadows Play", but a bit more musicality is put on display AROUND the bursts of break-neck speed shredding.

One nice thing here is that none of these songs comes across as bloated...often labelled as "epic" by people who really want to say, "this song is way too long!".  With the shortest track clocking in at 3:08 and the longest topping out at 5:03, the majority are in that comfortable 4 to 4:30 range, giving the songs time to develop and strengthen before they turn into unwanted house guests that simply won't leave!  Also, there are no wasted "intro" or "outro" tracks, which typically bore me to tears, so Tad Morose gets a kudo for that (can you get a single "kudo" or does it have to be "kudos"?)

There are several stand-out cuts here, with a handful of them being mentioned already.  "Darkness Prevail" features some of the most interesting drum work on an album filled to the brim with top notch skin work.  "Fear Subside" is another faster track, although full foot-on-the-floor speed isn't truly utilized here as the band throttles back ever so slightly from the previously mentioned "The Shadows Play".  Astute metal fans are likely going to point to "The World Is Growing Old" as having a "...And Justice For All" Metallica feel to the guitars, and they would be right in making that assertion, but this is a whole different animal once you get into the track, and Hemlin's power metal vocals lay waste to what remain's of Hetfield's voice at this point.

The production is top notch here, which I was a bit worried about being on such a small, unknown label as Despotz Records.  The mix is very clear, and there is excellent separation between the guitars so that you can hear what each is doing and they don't muddle the sound of the other.  The drum work here is excellent, and the bass lines, which I have previously neglected to mention, are big, thick, and powerful.  My guess is that it takes a pretty good sound engineer to keep the power of the bass chords from drowning out the vocals in a live setting.

My review copy is a digital download, so I cannot make any statement about the packaging of the album.  I have no idea if lyrics are included, but I can assure you that Hemlin's vocals are easy to understand and the lyrics are not hard to decipher in any way.

Again, I want to state that this is my first exposure to this band, but it will not be the last, based solely on St. Demonius.  I am that impressed.  And, again, I want to reiterate that I am NOT suggesting that Tad Morose replace Iced Earth atop the speed/power metal heap in your individual collection...but you definitely need to clear some space next to IE if you keep all the good stuff on the same shelf!!

Rating:  Very much a crankable record...spin the knob to 8 here!

Back To Reviews Index
Posted by arttieTHE1manparty at 5:31 PM