THE SPACEBITCH "You Should Have Been In My Shoes Yesterday" 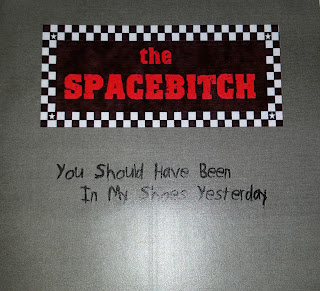 You Should Have Been In My Shoes Yesterday is garage sleaze punk in its purest, most raucous form.  The disc starts off with a parental warning, which is mildly humorous...and then it goes straight downhill.  Played as loudly and as fast as possible, this CD is made up of 12 songs that COMBINED clock in at less than 27 minutes, with half the disc's songs coming in at 2:04 or less.  The "epic" here, "Never Ever Be Like Me" is the real clock-burner, checking in at 3:39, while "Nothing Makes Sense" spins the hands 3 times as well.  Otherwise, the band keeps most of this noise mercifully short, which I guess I can thank them for.

Hoon's vocals are gritty and more spit out than anything; he never approaches anything resembling singing, which is just as well as most of the lyrics are so mind-numbingly repetitive and inane that being able to understand them all might make my head explode.  The drums are equally repetitive and simple, and the rhythm and bass lines are pretty much just up-and-down grinding of the instruments' respective strings, albeit at a fast pace.  The lead guitars aren't horrible, I suppose, and actually show a bit of promise musically if Stophe could manage to break away from this trainwreck of a band and end up in a good rock act of some type.  Again, considering this showed up out of the blue some 14 years after its release, maybe he has managed to find a solid band...or managed to find full-time work in the sanitation industry...who knows.

Song-wise, there is really very little I can say here.  I guess the piano is an interesting addition to "Nothing Makes Sense", although even that is little more than in-tune-and-tempo banging on the keys.  Other than that, there is virtually no variance in pace, tempo, style, or sound between any of these "songs".

Let's see...positives, positives, positives...  Well, I guess the production isn't terrible and someone with at least some skill recorded this as it doesn't sound like it was recorded on a boombox or in a basement.  Apparently the guys all showed up with instruments.  Someone knew how to turn the power on.  So, yeah...there you go...

I am sure these guys' friends think they were the best unsigned band in Australian history, and there is likely a punk aficionado that will absolutely love this record.  For me however, I can categorically state I will never...EVER...put this in my CD player or computer again and thank the Divine intervention that gave me the wisdom of not ripping this to my iTunes so that I didn't have to waste the time removing it.

By the way, I had to work WAY TOO HARD to get the "album cover" (its computer printed and folded in half...nothing inside) put up, as even my scanner didn't want to touch the thing and there are ZERO images that I could find on-line.  Also, it was STUCK inside the plastic sleeve, so  I ended up taking a picture with my phone (sorry about the flash) and emailing it to myself.  That's how much I care about YOU never buying this by accident!

Posted by arttieTHE1manparty at 12:22 PM