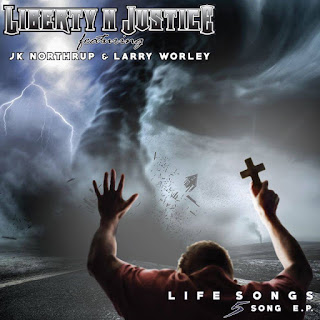 Liberty N Justice have released their latest project, Life Songs EP, with a couple of interesting changes.  First, Larry Worley of Fear Not/Love Life fame(?) is now the band's full-time lead singer...at least for this album...again moving the band further away from the project that it used to be with a rotating roster of 80s hair metal greats taking turns in front of the microphone.  Worley also contributed to the music and lyrics of the lead track, "You Got Love".

Secondly, Guitar Master Extrodinaire (yes, capital letters are required), JK Northrup plays every single note of all of the instruments on this record.  All of them.  Guitars, bass, drums...everything.  Additionally, Northrup wrote all the music, mixed, mastered, recorded, and produced the entire project.

And thirdly, and perhaps most importantly to long-time fans of the band, the man behind LnJ for all of these years, Justin Murr, had no hand in the actual performance on this record for the first time ever.  According to Murr, "I was done.  Liberty N Justice was finished as far as I was concerned, due to some things going on in my life.  The Vow was the last thing I was going to do with the band.  But JK came to me and said he really wanted to do another LnJ record, and he's the reason its even coming out.  I was done, but after he came to me, I started writing again, and here we are..."  Murr also told me that it wasn't until he committed to writing the project that Worley came on board, so to say that Murr is not involved is not 100% correct...just not in the capacity that fans may be used to seeing him in.

So what, then, separates Life Songs from any other solo album that Mr. Northrup has done?  On the surface...musicaly...probably not a lot, actually, although people looking for a shred record of sorts, or even a Vai-like or Satriani-esque instrumental album will not find that here.  What we have here is an EP of melodic hard rock songs, very much in the 80s/early 90s vein, but with more crunch than some of those era's songs had, particularly in the rhythm guitars and the production.

But if you dig deeper, Murr's presence is still here, whether in the humorous lyrical turns he makes with some songs, or the deeper, introspective aspect he brings to the words of others.  Always seeking to get his faith-based ideals across without becoming preachy or Bible-bashing, Murr has routinely brought chuckles to many of his hardest rocking tracks, like in "Cut Me Mick",  and tugged a heartstrings with his more poignant, sometimes painful tracks, such as Sin", featuring Jani Lane, both of which can be found on The Cigar Chronicles from a few years ago.  Those trends continue in this small tease of an EP, giving the listener hope that there may be more left in Murr's pen for future LnJ releases.

Album opener, "You Got Love" breaks out with a hard-charging guitar before Worley's gritty, snarly vocals kick their way in on a track that is very much reminiscent of the material on Fear Not's record or the LnJ remake of 'We Have A God" from a couple of years ago.  Not to missed here is the BLISTERING solo from Northrup at about the 2:40 mark.  I'm going to go on record and state that my fingers won't even move as fast as JK's here, and I'm not trying to find notes at the same time!  Truly smoking fretwork here on an enjoyable opening salvo from this new arrangement of LnJ.

"Gangster Of Love" is a song title that Murr has kicked around for several years, finally bringing it to life on this funky track that I honestly expected to hear a full horn section utilized on.  With such unforgettable lyrical turns as, "You're a hottie like Gotti" (referring to notorious mob boss, John Gotti), Murr keeps his lyrical tongue fully in-cheek here, reminiscent of some of the truly fun songs of the LnJ catalog, such as "Nakatomi Plaza" or "Cut Me Mick".  In fact, scattered throughout the track are multiple gangster name drops, from Lansky to Capone.  Well worth checking out!  By the way, another smoking guitar solo rips through this track, which is my favorite song on the EP, although I do wish the solo had been a bit longer.

"My World" throttles back a bit, delivering a more mid-tempo melodic rocker with big backing vocals on this track about seeing the bright side of a painful relationship coming to an end.   Worley sounds perfectly at home here, taking a bit of the edge out of his vocals on the verses, then dropping it back in to snarl through the chorus of ,"My world's a better place without you in it/My world's a better place, I finally get it/My world's a better place...".  As expected, Northrup delivers another really solid solo here and top notch rhythm guitar and bass work throughout.  Its always good to hear a song such as this, which could easily come across as bitter, actually taking the high road and looking to the positive side of things, even when human pain is involved.

"Only Choice" is the most blatantly Christian song on this effort, and even then you have to really dig into the lyrics to get some of where this track is coming from.  Once again, this is a more mid-tempo, melodic rocker, with some solid vocal work from Worley who really showcases that the power scream and snarl approach isn't the only way his vocals work.  Sure, there is still some grit and gravel to his approach, but he can throttle back the angst with obvious ease here, which adds to the overall feel of this nice little song.

"And Again" wraps things up by turning the energy back up just a bit, still maintaining that mid-to-uptempo groove that the majority of these five songs dwell in.  Another song about a strained relationship, this song takes the listener through the history of that relationship from start to finish, almost as a prequel to "My World".  Murr has told me that both of these songs are, unfortunately, autobiographical, and in a way, a form of musical therapy for himself.  Once again, not spewing venom, but clearly stating regret, "My World" is a really solid song that Northrup and Worley only enhance with top-notch performance.

The production throughout the album is pretty good overall, although there are a couple of spots where the mix on the drums seems a bit off, probably largely due to the electronic drums being used.  Perhaps it's just my ears, however, as Mr. Northrup is obviously far more musically inclined than I have ever been (although I may be able to outplay him on the saxaphone...).  In fact, if I was to make any complaint about this record at all, other than the brevity of it (which always costs EPs in the end, as far as ratings go...), it would definitely be the drums, as the fact that they are machine-produced really takes away from the opportunity for a big powerful fill or any kind of out-of-the-ordinary rhythm patterns.  They are programmed well, but there is no doubt that these are not "live" drums, which, if I'm being honest, does serve to detract from things just a bit for me.

The guitar work here is simply phenomenal, and I again ask how Northrup was not so much bigger than he was back in the hard rock/hair metal heyday of the 80s, because his chops are easily on par with what passed for great in so many marginal bands.  The guy can flat out smoke and I never tire of listening to his work, whether it be solo, with Paul Shortino, LnJ, or any other project he has been affiliated with.  To learn more about JK and his music, make sure to visit his Alien Productions site...I'm sure you will be blown away.

As of this review, Life Songs is a digital only release, currently available on iTunes, but it will be released on CD in the near future from HighVolumeMusic, so check there if you, like me, are more inclined to go for physical copies.

Justin Murr has assured me there is a new EP on the way from LnJ very shortly, so be sure to keep an eye and ear out for that, as well.

Rating:  Glad to have them back, LnJ kick off a crankable 2016 with a solid 8 effort here!

Back To Reviews Index
Posted by arttieTHE1manparty at 6:49 PM