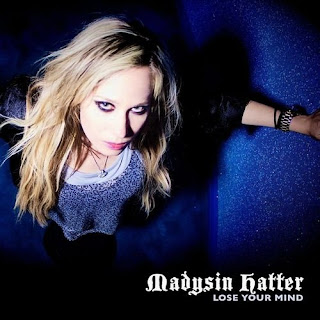 For astute readers of Glitter2Gutter, you probably remember Madysin Hatter as the creator one of our favorite EPs to come out a couple of years ago.  That EP, Pretty Little Fool, combined heavily-70's-influenced hard rock with some pop songwriting elements to create a sound that we absolutely fell in love with here.  As such, I was anxious to hear what Ms. Hatter would come up with next, as she had informed me that a full-length record was in the offing, and that she would send it to me as soon as it was ready.

Lose Your Mind is that record, and it is a really nice continuation from Pretty Little Fool.  In fact, all four songs from that EP are contained in this new record, albeit in a different order and interspersed throughout the album.  In addition, six new tracks are included here, all continuing in a similar hard rock vein but generally coming across as a bit more 80s in the approach to the songwriting, which gives the flow of the album a very nice back and forth, yet never coming across as sounding dated in any way.

The album opens with the uptempo rocker, "Its All Good", a good-time party anthem with a simple, yet catchy guitar hook, some big, pounding drums, and an easy, sing-along chorus.  While catchy and effective, "Its All Good" is almost immediately dropped from memory when the sassy, attitude-laden "Black Velvet Snakebite" comes slinking out of the speakers,  Hatter allows her vocals to ooze their way back into a Stevie Nicks-esque posture, which is where her voice works is best, in my opinion.  Again, solid work from the backing band here really serves the song well, particularly in the bluesy edge supplied to the guitars.  An excellent track here, it is only my third favorite on the record yet it still sets up the rest of the album with rather high expectations from this independent artist.

"Rocky Road" is a plaintive, stark ballad that appeared on the Pretty Little Fool EP previousely, but is one that I am very glad made it here, as I find myself liking it more and more with each listen.  The track kicks off with just Hatter and an acoustic guitar before a really nice electric blues riff come smoldering through atop a simple drum line and rumbling bass work.  One of my top two or three songs on this effort, "Rocky Road" is a very well-crafted song that highlights Madysin's unique high-end-yet-bluesy vocals and superb songwriting skills.  I truly wish more current artists would remember there is more to putting together a good song than massive walls of guitars and thundering drums, because the relatively stripped-down approach of this song speaks volumes about how, while those things are nice, they are not the be-all, end-all of songwriting.

The sort-of title track, "Lose My Mind" continues in the more laid back style of "Rocky Road", although it ups the tempo ever so slightly.  A Zeppelin-inspired guitar riff sets the tone here, with Hatter again reaching into the upper range of her gritty-yet-vulnerable vocals to deliver another neo-70s rocker that also sports a solid, if too short, guitar solo and some very good bass and bottom end drum work.

"Pretty Little Fool" is an INSANELY catchy 70s styled track which was pulled over from the previous EP, setting up another of my favorites here, the new new number, "Jukebox Jive".  A distorted blues guitar riff come shuffling straight out of the roadhouse to open this boot-stomper, which has 70s Aerosmith written all over it in so many ways.  Again, Hatter's vocals manage to slink their way into and out of the guitar riffs that just scorch their way throughout this track.  Love, love, love this song and would honestly like to hear an entire album of this style of hard 70s blues rock, as I think this is where Hatter and her band really excel.

"Never Knew" has the 80s acoustic lead-in ballad down pat, a la Warrant's "Sometimes She Cries", and is a track that really showcases Hatter's more melodic vocal approach, as opposed to the bluesy rasp she drops into a track like "Jukebox Jive".  Madysin REALLY soars vocally (you have to hear her wail at about the 3:20 mark!!!) on a track that I truly believe would've pulled radio airplay in 1988 or 89, as it is really well-written and performed.

"Gypsy Rock", another holdover from the EP, is so heavily Stevie Nicks influenced that it sounds to me like it incorporates a couple of different Fleetwood Mac songs all into one track.  A really, really good guitar solo is also found in this retro rocker, which is still my favorite from the EP.  "Lightning Strikes Twice" is another EP holdover featuring a heavy Zeppelin vibe, with the slow build and burn of "This Last Time" being the album closer and the final new song on the record.

The mix is solid, and the production is above average for an independent project.  Do I think some high dollar knob turner could beef up the sound a bit?  Sure, but the overall feel of the album is a deliberate throw back, as Hatter states in the liner notes that "Lose Your Mind is a hand-crafted record; an analog recording and mix of a band playing and recording songs in one studio together, captured on the finest magnetic tape.  We felt strongly that the music benefited from this approach.  To achieve the type of fearless performances and big, bold sound Madysin Hatter was after, we didn't want or need a lot of post-production flexibility.  The optimal technology was a great band, a great analog studio, and a few reels of tape."  Retro, indeed!

The packaging is well done, with no fewer than 9 pictures of the striking singer, along with performance credits, writing credits, a brief thank-you list, and a few other notes.  Lyrics are not included.  The album is available in digital format if you prefer, or CD's and other merchandise can be ordered from www.madysinhatter.com.

A solid leap forward for a talented group of performers and musicians, Lose Your Mind is well worth seeking out if you are a fan of solid 70s inspired hard rock with 80s influences, while not looking for a band that sells its soul and sacrifices its sound in an attempt to gain popularity.  Madysin Hatter is who they are.  Uncompromisingly so, in fact.

Rating:  Definitely a crankable record.  7.5 on the knob for this one!

Back to Reviews Index
Posted by arttieTHE1manparty at 11:35 AM