STEVEN TYLER "We're All Somebody From Somewhere" 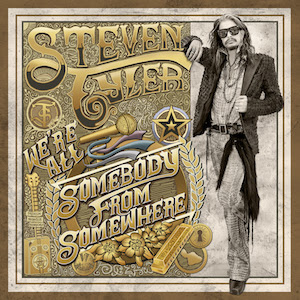 ...and a whole bunch of other folks!  (Seriously, this list would be incredibly long!)

I decided to approach this review in a completely different way.  Instead of telling you everything that this album is, I'm going to instead tell you everything it is NOT.  So, as a primer, the four "NOT's" we are going to cover here are:

It is NOT an Aerosmith (or ANY band) project.
It is NOT a country record...seriously...
It is NOT horrible...
But is is NOT great, either.

First, it is NOT an Aerosmith (or ANY band) project should be simple enough to understand.  Outside of Tyler, I cannot find a single instance in any of these 15 tracks where another Aero-member made an appearance, a co-writing credit, or was even thanked.  So if you were going into this with some sort of hope for at least a partial Aero-reunion, forget it.  This is a Steven Tyler solo record done in the purist Nashville sense, meaning that there isn't even a cohesive band used on the record.  Instead, what Tyler does is what the vast majority of country artists do, which is assemble a massive collection of studio and session talent to put together the best sounding record possible.  Does it work?  Largely, I'd have to say yes, as the performances here are musically solid...even very good...as is generally the case in the Nashville music scene, as that town is seemingly chock full of top-of-their-game pickers, pluckers, fiddlers, and drummers who have their craft down to an absolute art form.  For that reason, I do think Tyler should get at least a nod of appreciation, because he didn't do the easy thing and just grab a couple guitar players and build a band.  He went for the best and it generally shows through in the performances.  Now, he did pull in some pretty big names for production help, and that's not a bad thing.  Anytime you get Dann Huff to work with you on an album, you have managed to get one of the best, period.  T Bone Burnett helps out on half of the album, with Jaren Johnston from the Cadillac Three and Marti Frederiksen lending assistance on a few tracks as well.  So, while NOT an Aerosmith record, it is also NOT lacking in musicality or top-notch performances.

Second...it is NOT a country record....seriously.  For those who may not know, I grew up in rural Nebraska where you would hear Hank Williams, Jr., Alabama, Johnny Cash, Chris LeDoux, and Waylon Jennings mixed in with AC/DC, Guns N Roses, Poison, and Ratt, and think nothing of it.  I also spent many years working in country radio, so it is not like I don't know a thing or two about country music.  In fact, while it is definitely not my main go-to musically, I still enjoy several country artists from time to time, mostly older "Outlaws", newer "Red Dirt" artists, and a few neo-traditional artists.  What I don't like at all is what passes for about 90% of Top 40 Country Radio these days; the music that people attempt to pass off as country these days is downright stomach-churning most of the time.  Bro-country, hip-hop-country, pop-country...I can't stand the vast majority of it.  So, with that understanding, what Tyler does here really isn't country.  Sure, it was done with Nashville session artists, and yes, you can hear a lot of country music instrumentation, but the record, as a whole, is not a country record.  Yeah, he gets a bit "bro-ish" on one of the dumbest songs on the album, the lame radio grab, "Red, White & You", and the equally desperate "Sweet Louisiana".  Same with "Love Is Your Name", which, again, just begs late 90's/early 2000's country fans to request it on their favorite radio station.  And the instrumentation of "It Ain't Easy", which features not only pedal steel and fiddle, but also a mandolin, is definitely country-tinged.  But when you are looking at those four songs...and another one or two that come readily to mind, especially "I Make My Own Sunshine"...through the scope of 15 total tracks, you can't truly call this a country record.  Maybe a label more along the lines of an Americana album would be more fitting and appropriate.  Now, country fans aren't going to be offended by anything they hear on this record, by any stretch.  In fact, I think several of them will throw this Tyler record in their disc changer right next to Eric Church (who kicks serious tail, by the way), Turnpike Troubadours (again, ass-kickers...), Little Big Town (who does NOT kick serious tail), and Thomas Rhtett (yeah...no thank you...).  And maybe that ownership of Tyler will lead them over to explore more Aerosmith, and maybe some similar artists, which can only be a good thing, right?

Thirdly, it is NOT horrible.  Not at all.  In fact, there are a few songs I really, really like here.  The opening track actually sounds like something that Aerosmith could tackle at any given time, and Tyler's ability to cheekily coin a lyric is in full effect from the get go, as he proclaims, "I could blame Jesus, I could blame Momma, I could blame Brahma for all the bull that's in my head...".  Pure Tyler right there, folks. The chorus part sounds a lot like "I Don't Wanna Miss A Thing" from "Armageddon".  I really, really like the Jeff Beck-inspired "Hold On (Don't Let Go)", which features an excellent blues-soaked harmonica solo (which is oddly enough NOT performed by Tyler), and a great clap-clap-stomp pattern that just hooks you from the get-go and doesn't release you at all.  Of course, everyone knows that "Janie's Got A Gun" is an Aero-tune, but this version is even darker and more desperate sounding in its slower, sparser acoustic presentation here which relies heavily on the vocal prowess of Tyler and far less on the strength of Aerosmith as a band.  I know some purist fans are going to disparage his effort here, but for my money, I actually think I prefer this version.  And, Janis Joplin's "Piece Of My Heart" is given yet another send-up here, with Tyler doing a pretty good job of letting country fans know that the pop-country version Faith Hill released on her debut album 20+ years ago is NOT how this track is supposed to sound.

Finally, this is also NOT a great album, either.  Largely, this is a product of Tyler not being given a chance to really shine in his areas of strength, which are his lyrics and his grasp of bluesy, soulful songs.  The material Tyler works with here just doesn't have that sexy swagger that you expect from something with his name attached to it, and a lot of the lyrics are hokey as opposed to cheeky.  For example, from "It Ain't Easy", we are given this great lyrical drama: "Lookin' for the hand that holds the smokin' gun/It's like tryin' to squeeze a drop of rain out of the sun"?  What the?  Or how about these charged up lyrics from "I Make My Own Sunshine":  Everything is woderful, everything is great/And I'm as free as a bird outside my window pane"?  Sheesh!  And when he isn't being corny, he's being so dang serious!  Fun is definitely something that is lacking in great doses on this record for the most part.  And with the record being bloated with 15 songs, when most of them aren't fun, it makes it hard to get through on repeated listens.

In the end, if I'm asked to sum up We're All Somebody From Somewhere in one simple paragraph, I would state the following:

This record, despite being a Steven Tyler solo record, lacks the things that make Steven Tyler who he is, and has always been.  There is no sex, there is little humor, and there is very little in the way of fun.  When mixed into a 15 track album that really only contains 4 or 5 memorable songs...one of which is an Aerosmith cover, and another is a tired Janis Joplin cover...not even the sound of Tyler's voice can salvage an album that, for all intents and purposes, lacks anything else that is truly Tyler.  This is a mix-in album at best, and realistically, I'd only mix in about 5 of these songs.

Rating:  Rock this at a relatively disappointing 5.5, knowing that even trimming the fat of the absolute worst tracks here wouldn't bump it past 6, however.

Posted by arttieTHE1manparty at 4:15 PM