3D IN YOUR FACE "Lost In The Volume" 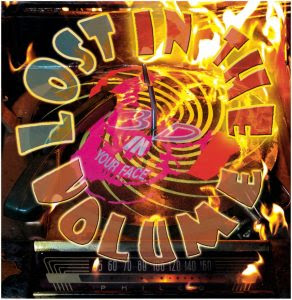 I love the underdog.  I really do.  I love the fact that there are small bands out there that are busting their guts to keep the style of music that they love alive.  I salute all those bands out there slogging it out in small, sweaty bars, playing county fairs, and doing whatever they have to do to keep the fires stoked for the music they have a passion for.  As such, I have a soft spot for 3D In Your Face, a four piece hard rock./hair metal outfit from my home state of Nebraska.

These Omaha natives have been around for many years now, and if you have caught their live show, you know that they are a full-scale entertainment package, with a big sound and light show, true-to-the-era costumes, and, yes, the "hair" of the time...albeit in wig fashion.  However, don't think that 3D In Your Face is a farce cover band, as that is not the case.  Yes, they do play some excellent covers of music from all of the biggest bands of the 80's and early 90's, but they are also serious musicians and artists with their own material as well.  This new release, Lost In The Volume is their fifth studio album of all new material, in fact, and their follow-up to 2014's well-received Midnight Devils.

The album kicks off with some thick, heavy guitar riffing of the angry variety, before the drums come thumping in and King's lower-register snarl claws its way into the mix.  There's a nice, heavy guitar solo from Sniper on this track, and while the backing vocals could use a bit of a boost from an additional couple of layers, the song is catchy enough and likely one of the new songs to find their way into the live show as it is one that fans could easily catch hold of and sing along.

"Moscow Queen" is not my favorite track on the record by any stretch, and is really one of the few filler tracks on this disc, in my opinion.  I just don't care for the happy-yet-punky vibe on this track, although there are still some nice 80's-influenced guitar flashes here and there.  Be that as it may, I'm not going to lie...I skip this track every time.

"Loud" quickly makes up for the misstep of "Moscow Queen", and is one of the two or three best songs here.  An urgent, George Lynch-esque guitar riff (think the first couple of Dokken albums as far as style goes) opens things, and King's snarl is in its most comfortable range zone here, as he neither plumbs the depths of his range, nor does he try to reach the upper stratosphere with screams or falsetto.  This is a really, really good hair metal track with a nice, aggressive guitar line running throughout, and Spade's bass work is in top form, as well.  Sniper scorches a killer solo at about the 2:10 mark here, before giving way to the lone King scream of the track, and then the final verse kicks in.  Again, this track is pure early Dokken-worship musically, but vocally it reminds me more of the aggressive approach used by bands like Loudness, for example.  Truly love this track.

"Memphis Mile" keeps the pace rocking as they name-drop their hometown on this rollicking track that has a bit of a Poison feel to it.  Sniper has a couple of more blues-inspired drops under the verses in this track before again smoking his way through a high-speed shredder of a solo.  One of the fastest pure rockers here, this is again a song that I think fans will instantly gravitate toward in a live setting, as it is catchy, upbeat, and easy to follow.

"Sound Of Recklessness" is another track that really challenges "Loud" for best song on the album.  Again, we have a strong, churning rhythm guitar to get things started, with a heavy backbeat from Spade and The Hammer plowing the way forward so that King can come blasting through with a confident, snarled tenor that suits him well.  Sniper tears up the fret board once again on his solo as The Hammer churns away on a machine-gun styled snare march tempo, before the band backs way off, allowing Spade to set the stage for King to moan and wail for a moment before Sniper rips back into another blistering run.  Awesome stuff to hear!

"This Isn't Goodbye" is more of a mid-tempo rocker, and while not my favorite number here, it is not a bad track.  I'm just not a fan of this tempo.  Think GnR's "Sweet Child of Mine".  A LOT of people love it, but I never did, as it has a tempo that just never resonated with me.  Same with "This Isn't Goodbye".  It just lacks the aggression and punch that the band incorporates into its best material.  A lot of great 80's albums had tracks that fit this sonic style, and it is performed well overall, although again, the backing vocals could use some beefing up here.

"Ringing In My Ear" kicks the pace back up with a high-octane pace that keeps the album from bogging down at this point.  A churchy keyboard intro leads the band into "Baptized By The Radio" which is a decent track, but comes off as a bit bloated at nearly six and a half minutes.

"Static Renegade" is a nice, fast rocker that opens with...what else...static, as the subject of the song fiddles with a radio dial, trying to find something to listen to, before a roaring guitar comes ripping out of the speaker.  Released as a video by the band, you can get an idea of what 3D In Your Face brings to the table below:

"Show Me How To Love Again" is the album's ballad, and it is executed pretty well.  A piano is the only instrument at the outset of the track, accompanying King's more upper-range vocals through the first verse, before the entire band kicks in to back the chorus and the following verses.  Something about this song sounds familiar, but I'm not certain what it is.  Anyway, it is a nice ballad in the power ballad style of the 80's, and while it's not "Is This Love", "Something To Believe In", or the epicness of "November Rain", it is definitely better than a lot of what passes for balladry these days.

"The Unknown Frequency" closes the record in fine fashion, returning to the driving hard rock that I feel is 3D's strong suit.  Sniper's guitars lead the track in, and the solid backline of Spade and The Hammer (sounds like a hardware store chain...), keeps the song thumping along in a song that, in places, has a "Gypsy Road" feel to the guitar stylings, although it is in no way a rip-off or sound-alike song.

If there's one real complaint here it would be one that the production, especially on the drums, is a bit thin in places.  I'm not sure if it was a microphone set-up issue, or perhaps this is the sound they were going for and I'm just missing the point.  It just feels like the drums could be a bit bigger in spots, especially the toms and the kick.  Also, as I mentioned in a couple of places, the backing vocals could utilize a few extra layers of "oomph" here and there, but these are relatively minor issues, especially when one takes into consideration the fact that this is an independent project likely put together on a relatively small budget.  I am more than willing to bet the best songs here sound even better live, as I have seen 3D In Your Face live on several occasions and, as I mentioned before, they bring a huge sound and show with them in whatever venue they are playing, as well as an energy that compliments their material even further.

3D In Your Face is not the best band you have ever heard, but they are also not a group of clowns that are out there making fools of themselves with parody songs and running jokes filled with juvenile locker room humor.  Yeah, they are a bit tongue-in-cheek in places, but they have a passion for what they do and it shows in the work they put into both their live show covers and their original material.

The liner notes come with full lyrics, band photos, thank-you's and writing credits, for those interested in such things...such as myself.

To get a copy of this album, or the equally well-done Midnight Devils, head to the band's website, www.3dinyourface.com and check out the band's store.

Rating:  I can't help but crank this record, as I love the effort, the style, and the majority of the songs here.  Crank it to 7, and be sure to track this band down in a live setting!