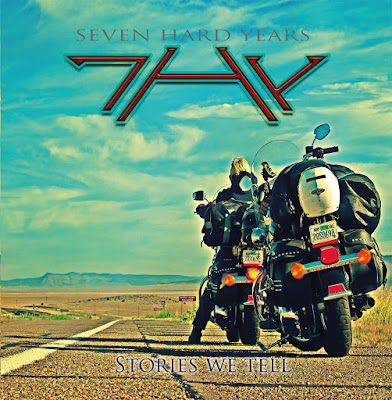 7HY (shortened from 7 Hard Years) returns with their sophomore effort, following the well-received 2014 effort, No Place In Heaven.  Once again, 7HY is largely a two-man effort, with the "group" composed of former Shy drummer, Alan Kelly, and Oracle/Line Of Fire/Livesay vocalist, Shawn Pelata.  Don't let Kelly's previous gig...or the band logo's eerily "Shy"-like appearance (come on...7hy...Shy...) fool you into believing that this band is a Shy clone, because it is not.  Incorporating bits of the 80s, a healthy dose of 90s progressive melodic rock, some modern elements, and the influences of Shawn's former bands, 7HY is an animal all its own.  Besides, this time around, you could almost jokingly refer to 7HY as the Kelly Family Band, as no fewer than FOUR Kellys make appearances on the record...alongside Marshall Law members Dave Martin and Tom Dwyer, guitarist extraordinaire Pete Fry of Farcry, and several other top-notch musicians...so the contributors each bring a bit of themselves to the overall feel and style of this record.  The result is nothing short of a spectacular collection of hook-filled, powerfully delivered melodic hard rock/melodic metal that seems destined to occupy a slot in many a reviewer's Top 10 list for 2016!

The album opens with the amazing "I'll Survive", which sets quite a high bar for the album. The intro, which features Pelata's voice and a piano, teases a far slower song than what "I'll Survive" ends up being, as the guitars and drums come driving in and the expertly layered vocals provide a sonic depth not present in many other releases I have heard this year.  Perhaps bands are getting more away from this stacked approach, but it is to their detriment, as this type of highly polished production is one of the things that drives this style of music, in my opinion.  There's a nicely placed, expertly performed guitar solo here, as well, although it is far from the highlight of this track.  In fact, it is the overall interplay between what Kelly wrote and how Pelata interpreted it that is the true power on this, and several other tracks, on this powerfully performed record.

"Break The Spell" follows up with a somewhat slower tempo, although it doesn't begin to approach ballad territory by any means.  Again, Pelata's vocals are allowed room to really soar, and the backing vocals on the simple-yet-catchy chorus, are perfectly executed.  There is a blistering fret-run of a solo embedded here, and the rhythm guitars throughout this melodic track are a driving force in keeping the track moving along.

"Don't Believe A Word" starts off with some interesting keyboard effects, and once again teases being a far slower song than it actually ends up being.  This track reminds me of some of the material Queensryche was tackling on their Promised Land and Hear In The Now Frontier period, which is among my favorite from that band.  Tempo changes, electronic sounds, screaming guitars, and powerful vocals all meld together in fine fashion, and Pelata really stretches his range here, piercing the ceiling of his range with seeming ease.  One of my favorite tracks on the album.

"One More Day" is as close as the album comes to an 80's-inspired throwback, reminding me a bit of something the Scorpions may have tried in their Savage Amusement days, not overly far removed from a track like "Rhythm Of Love", for example.  The track incorporates a sexy bass line, some nicely placed backing keys, and solidly paced drum line, all coursing beneath a layer of melodic guitar work and Pelata's emotive vocals.

"Only Human" has a haunting, ethereal quality to it, and while it is not my favorite track here by any stretch, something about it draws me back to it time and time again.  The ending feels a bit abrupt on this track, but Pelata's vocals really shine here, saving the track from becoming just another track amid so many great songs.

"Church" is easily the heaviest track on the record, actually pushing to the fringes of metal, especially with the frenetic guitar runs and the jackhammer-styled drumming utilized here.  Pelata adds a touch of an edge to his vocals here, which is effective, but the polished production and layered backing vocals keep the tune from driving itself out of the grasp of fans seeking music of a more AOR/melodic hard rock variety.

"Into You" keeps things clicking right along at a nice pace with solid rhythm guitars and a tight bass/drum line.  The chorus is catchy and easy to sing along with, and once again, there is a smoking guitar solo dropped nicely into the mix here.  However, there are some odd keyboard effects in the background of this song that I find distracting and which keep me from really considering this one of the better songs here.

"Broken Man" scales back the tempo a bit and is one of my favorites on the record, without question.  Again exploring material similar in style to the previously mentioned Queensryche albums, 7HY really shines on this type of song, with some outstanding, and not overplayed, backing vocal work supporting one of Pelata's strongest performances on the record.  Good, good stuff here.

"Driving Me Crazy" appears in two different forms here, with the solo vocal version coming first. Again, I can't help but hear a kinship musically with 90s-era Queensryche...and even more modern releases from House Of Lords...as far as the songwriting style goes.  This is not a knock in any form, as I love the material on those albums, and I feel the same here.  This song is expertly done in both versions, but I think I prefer this version to the duet, largely because I think the backing vocals are more of a presence here and there is so much more...edge...to the song.  The duet version, while nicely performed, doesn't rock in any sense of the word for the first half of the track, as it transforms this previously powerful rocker into a more emotional ballad-styled song.  There is a powerful build at the middle of the song with a wrenching guitar solo, and Ms. Kelly has a really strong, emotive voice, but I just prefer the edgier, harder rocking version of "Driving Me Crazy".  Neither is a skip track, by any stretch, however, and I am sure there will be many that prefer the duet take here.

"I've Been Waiting" is a really mid-to-slower tempoed cool track that just reeks of epicness to my ears.  The bass relentlessly throbs throughout this track which courses with an sense of urgency which is actually enhanced with some nicely placed keyboards and effects.  The backing vocals are big, the rhythm guitars edgy, the solo absolutely spot-on, and Pelata's vocals are perhaps at their peak on this track, which I would have to say is my favorite overall number here.

"Sweet Sensation" has a big 80's melodic rock feel to it, especially with the fat bass line rumbling along beneath the verses with keyboards and power chord guitars beefing up the chorus and bridge sections in fine fashion.  Some really nice, fun sass to this track.

I would say "Wasn't Always Like This" is the most Shy-like track on the album, and the band saves it for last on the album (not counting the duet mix of "Driving Me Crazy").  Not a clone of anything you will find on any of the Shy albums by any means, but definitely more 80's melodic rock in its approach than the rest of the songs here that feature a bit more of a progressive feel or a more modern style, at least to my ears.

Overall, this is an inspired effort filled with moments of sheer musical brilliance and some excellent performances.  Definitely a step above the debut effort (which was really, really good, by the way), Kelly and Pelata...and the whole Kelly clan!...have found their niche, in my opinion.  The solid songwriting, spot-on guest work, and some of the best vocals I have heard from the gifted Pelata, make Stories We Tell an album that will definitely occupy G2G's best-of-the-year list when 2016 closes.  One of the few melodic hard rock releases of the year that I would apply the label "must hear" to.

Rating:  Just an excellent record throughout, Stories We Tell is a definite cranker!  A solid, unquestionable 9 for 7HY!

Back To Reviews Index
Posted by arttieTHE1manparty at 1:27 PM