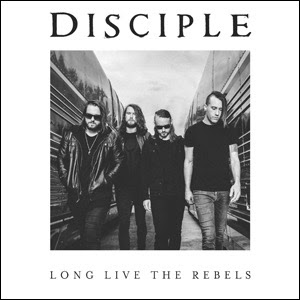 As an early Halloween treat, modern Christian rockers, Disciple, have returned with their latest offering, Long Live The Rebels, a crowd-funded effort which may be their strongest complete set of material to date.  Following 2014's well-received Attack, and 2015's EP release, Vultures, the band has returned with 12 brand new songs that are similar in style and approach to those of Attack, meaning a strong sense of melody combined with heart-pounding rhythms, buzz-saw guitars, Young's alternately clean-and-scream vocals, and a heavy dose of adrenaline.

As the sole remaining member of the original version of the band, which has been together since 1992, Young has really found his voice, not only lyrically, but stylistically, in the past few years.  Always bold spiritually, Disciple nonetheless played the genre-hopping game to a degree, starting off as something of a rap-rock band before fully embracing nu-metal, then more of a metalcore sound, before finally settling into their current, and most successful sound, with heavy modern radio rock. Starting in 2010 with their MASSIVE hit "Dear X (You Don't Own Me)", Disciple has really found their musical niche, still embracing their older, heavier styles, but also incorporating a more mature element, as well, particularly in the way the songs are put together.  Make no mistake, the guitars still churn away, chock full of angst and aggression, the drums are as thunderous as ever, and the lyrics are just as bold as longtime fans will recall, but there is an accessibility that has really shown itself over the past 5 or 6 years, allowing a broader fanbase to attach themselves to the band than ever happened in the past.  This is plainly evident in the fact that the last two full-length releases, Attack and now Long Live The Rebels have taken in over a quarter of a million dollars in fan-funding through Kickstarter, which is a number nearly any mainstream band would struggle to match.

On the new record, the band comes out firing on all cylinders, right from the start.  While possibly not quite as kick-you-in-the-gut aggressive as, say, "Radical" was on Attack, "First Love" is still an incredibly powerful song about finding one's way back to Christ after living a life of deceit, deception, and hypocrisy.  There's a really cool breakdown in the middle of the song, as well as an exceptionally catchy chorus (which so many of the tracks here really feature to a high degree), and some cool interplay between the two guitarists that set the stage for a truly great album.

The title track is up next and its our first chance to hear Young really get aggressive with his vocals on this album, and he does not disappoint.  Churning, swirling guitars abound throughout, and again, there is a really cool tempo changing breakdown at about the two minute mark before the track come crashing back in with the angst-filled chorus.  I really hope that this song makes the setlist for the next version of the City Rockfest Tour, as it is one of my favorites from the new album, no question."Secret Weapon" keeps the metallic aggression turned up with break neck drumming, blistering rhythm guitars, and a pummeling chorus informing the listener that with Christ in your corner, there is very little anyone can actually do to you as a person, as Young bellows, "You can knock me down, destroy my name, But my power comes from a Higher Place".

At this point, the band steps back the tempo just a bit with "Erase", which, for my money, is this album's "Dear X" moment.  A killer tune with a truly powerful message, the chorus alone will hook just about any rock fan, as Young passionately tells the listener that Christ "will erase, your yesterdays, you'll be okay, My Love is greater than your mistakes".  The guitar work on this track is absolutely perfect, and the rhythm section is tight and controlled, so as to not let the song spin out of control into a more aggressive animal than it needs to be.  Its this restraint...this maturity...on this record that speaks volumes about how much Disciple has grown, especially since this version, dubbed Disciple 3.0, has taken the reins of the band.

The difficulty for me in reviewing an album like this one is the desire to break down every single track, which not only makes for an incredibly long review, but also takes away some of the fun in the discovery for people who seek the album out.  That being said, there are just so many excellent moments here, that it is really hard to not lay them all out, whether it be the lyrical wallop that Young hits you with on "Come My Way" ("can you feel my fingertips on the chalkboard of your soul?"...brrrr....goosebump material there!), to the machine gun drumming and aggressive rhythm guitars of "Forever Starts Today", to the haunting structure of "God Is With Us", which was instantly a favorite with my kids due to its insanely simple-yet-uber-catchy chorus.

There really are no weak songs here at all, with only the second-to-last track, the quirky "Spinning", being the only track that even hints at being a bit out of its element on this record.  Even then, I will say that the nearly 180 degree style change, from a mid-tempo rocker to angst-riddled, scream-infused headbanger is a fun one, and Young's lyrical twists ("my life is just a burned out cigarette") make it a fun listen, much like "Kamikaze" did on Attack.  And for anyone who thought that the band maybe strayed a bit too far on that track, the album closer, "Empty Grave", brings the focus back front-and-center on Christ, His resurrection, and the miracle that it is for humanity, in truly powerful fashion.

The band still does not have a full-time replacement on bass, so multiple people step up in that capacity here, but the overall chemistry of the band and the record do not suffer in any way.  The production is top-notch, as is typically the case with the highly professional Disciple, and the mix is stellar to my ear.  Again, the interplay between Prince and Stanton is truly great to hear, and the drum work from West throughout the record is spot-on for me.  And of course, Young's abililty to run the gamut as far as vocal approaches goes, gives Disciple a musical depth a lot of bands of this style don't have, especially with Josiah Prince adding some excellent backing vocals to the mix.

Is Long Live The Rebels a clone of Attack?  No, not by any stretch, although fans of that record, or any of Disciple's records since Horseshoes And Hand Grenades will definitely find moments of comfortable similarity and enjoyable familiarity.  Is it better than Attack?  That's a tough call, also.  While I don't know that I would say it is better, I would say that this new record is definitely on par with that excellent record, and a great return to tru form for the band who may have thrown a few people off a bit with the darker material that was cobbled together for the Vultures EP.

Rating:  Definitely crankable and an instant candidate for record of the year.  Spin this one up to 9!