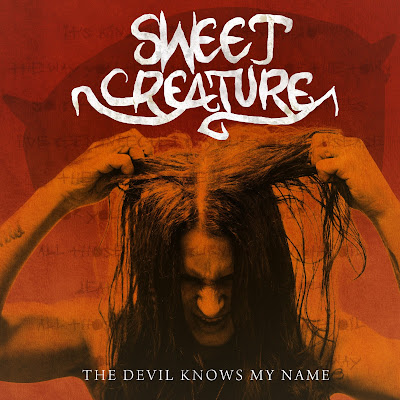 With Martin Sweet being one of the founding members of Crashdiet, and with members of Gemini Five (Starr),  and Toxic Rose (TxR), it would be easy to guess that Sweet Creature would be an extension of the modern style of glam/sleaze that the represented bands play as their main style (we won't cosider that Nirbant's main gig is in a death metal band...).  And while that would not be wholly wrong, Sweet Creature is definitely not a sound-alike duplicate of any of the aforementioned bands, with more of a 70s classic rock sound mixed in with obvious 80s influences such as Motley Crue, for example, while also tossing in minimal doses of the 90s.

Take for example the album's lead single, "Not Like The Others".  The song is instantly catchy, with the chanted chorus leading off the track in a very Crashdiet-sounding way, but the guitars are much more straightforward, with no crazy antics or soaring leads to take away from the almost grungy take on song structure, with thick chugging riffs, while the thumping bass and drum lines fall more in line with bump n grind songs like "Pour Some Sugar On Me".  In fact, it's really only that insanely catchy chorus that even teases the listener with an idea of where some of the band's members come from.  Its an odd combination, I know, but you know what?  I really, really dig this track and I was hooked right from the get go.

"Time To Move On" has some quirky tempo changes that make it a fun listen, and one of the more Crashdiet-like songs on the album, as it reminds me of some of the stuff they put onto their second record.  "Burning Midnight Oil" is another really good hard rock number with a definite nod to The Crue in the guitars department, especially on the intro and the pre-chorus sections sounding very much like what Motley was writing in the Girls, Girls, Girls era.

The title track is an interesting combination of Jane's Addiction and Crashdiet, as the verse sections have that acoustic guitar base that Jane's Addiction used to such effect in songs like "Jane Says", (and Sweet's voice even takes on a slightly Perry Farrell tone as he works through the verses), while the heavier guitars scream in on the chorus sections.

"Purpose In Life" is quite possibly the peak moment on an already solid debut record, and is one of my two or three favorites here, with a sweet acoustic guitar lead-in and a big, power ballad feel that is easily the most reminiscent of the 80's scene that Sweet and his previous band, Crashdiet, have always been most closely linked with.  That being said, there is also a 70s classic rock vibe going on throughout this track that is really cool, and the guitar work here is nicely underplayed so it doesn't dominate the entire track and turn it into a big, over-produced mess.  Despite the lackluster effort at rhyming some of the verses here (possibly a language issue), this is a really, really good song that will likely slot in as one of the best ballads of the year.

The rest of the album is much the same: a very solid, if not overly flashy record, that shows Sweet taking tiny, baby steps away from the tried-and-true mold of the hugely successful Crashdiet.  Will Crashdiet fans find plenty to like here?  There is no doubt about that, but don't expect a carbon copy of Rest In Sleaze or Generation Wild because that is not what you will get here.  What you will get is a fun, slightly diverse record with some really big rockers, an excellent ballad, and a couple of slight-misses ("Our Life", for example, really doesn't grab me for some reason...), that equate to an overall enjoyable listen that is well worth seeking out.  There is no doubt that the first half of the record is stronger than the second, but "Away From You" and "Fifteen Minutes" are solid efforts that hold the record together in the later stages.

The production is very good throughout the record...as I mentioned, not flashy, not sugary, and not bloated...and the overall performance of the band is what you would likely expect from a group made up of members of previously noteworthy bands.  The interplay between Sweet and Nibrant on guitar is especially strong, which is actually the area I was most concerned about since Nibrant's death metal background is a LONG way from where this record goes!  It will be interesting to see if this is also the touring version of the band should Sweet Creature hit the road, and I'm imagining that gigging together will only make the band that much tighter on a follow-up record.

I look forward to further growth from Sweet Creature in the future, and feel that if Sweet's old band is truly dead and buried, then this band is a suitable successor, even if there is likely little chance of supplanting a once-in-a-lifetime band like Crashdiet.


Rating:  Crank-worthy, but with room for growth.  Crank this to 7.5 and keep your eye on Sweet Creature in the future.

Posted by arttieTHE1manparty at 8:32 AM