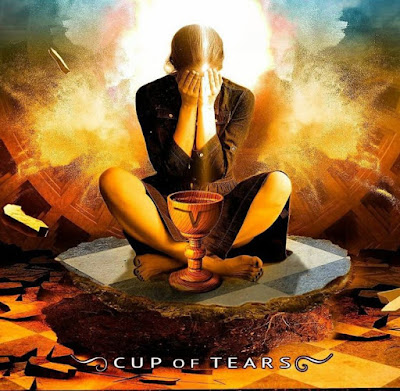 When I first got into hard rock and metal, I was constantly seeking out bands that no one else was listening to.  I would order demos and independent releases out of the back of magazines from bands, trade dubbed cassettes with friends, and buy anything from the small opening bands at the shows I would go to, just to have more!  When I got older, the internet made it easier...MUCH easier...to track down music that none of my friends were listening to, especially from bands in Europe, where metal was continuing to thrive even as grunge and alternative rock dominated the American landscape.  And while a lot of my friends were also discovering the great bands from Great Britain and Germany, I was focusing on finding bands from places like Norway, Italy, and most notably, France, where I found several bands that I had never heard of but instantly took a liking to.

Now that the world has shrunk even further with social media, bands now contact me to have their music featured and reviewed here.  And, wouldn't you know it, one of the most exciting releases I have heard in quite some time comes from...France!

Devoid is a melodic metal band that literally brought a smile to my face and goosebumps to my arms when I first played Cup Of Tears.  This...THIS...is what melodic metal should sound like, in my opinion.  Not since Balance Of Power, Magnitude 9, or Theocracy do I remember putting in a melodic metal CD...be it power metal, prog metal, or traditional metal...and having it just absolutely grab me the way Cup Of Tears did.  I have heard a lot of melodic hard rock albums over the past several years that have been incredible, but melodic metal albums seem to miss the mark much of the time.  Not so here, as Cup Of Tears manages to find that perfect balance between technical finesse and artistic flair, between insanely fast-yet-precise guitars and intricate-and-interesting keyboards, between break-neck, pulse-pounding bass and drum work and more subtle, more emotive fill work.  Heavier, faster, and more metallic than their highly talented label-mates, Fiction Syxx, Devoid combines both power metal and progressive metal elements on an album that most certainly would have made the Glitter2Gutter Top 17 of 2017 had it crossed my desk earlier.  However, it wasn't until January 6 of this year that guitarist, Shad Mae, contacted me and asked me to review this masterpiece of an album.  So, in retrospect, I have gone back and included the album in the "honorable mention" section, despite the fact that there is no doubt it would have made the Top Ten...heck, most likely the Top Five...had I just been able to hear it earlier.  Honestly, it is that good!

Highlights of the album for me would definitely be the insanely intricate and catchy "Religion", which features an absolutely stunning guitar solo and some darker, edgier vocals from Lizard, whom I find to be a particularly strong singer with a rather large range.  The album's opener, "Soldiers" really sets a nice tone for the record with its heft and punch, and the instrumental, "Hollow Point", really gives Mae a chance to show off his prowess on the guitar.  I also really like "Collective Heart", which perfectly combines the heavy crunchiness of "Soldiers" with a big, layered, melodic chorus that just screams catchy!  "Clock Is Ticking" is probably the most progressive track here...proggy in the early Queensryche or Fates Warning style...and the riffy "Colours Fade To Grey" has grabbed my attention since the first time I played the album...but then again, so has "Mindkeeper", which is a heavy, guitar-driven track with a really cool hook and memorable chorus.  However, since one of the main strengths of the album, as a whole, is its songwriting, it is very difficult for me to point to just one or two specific songs and say, "Those are the best!", because there is nothing here even close to filler or throw away.

If I were forced to make a comparison between Devoid and some other band, it would be a bit tough.  At times, they remind me very much of Balance Of Power, while at other times, you can hear bits of Pink Cream 69, or perhaps even some Evergrey.  The guitars are a bit more technical here, I think, and the overall feel isn't quite as proggy as PC69 sounds at times.

I really don't know anything about the band's members, and I have no idea if this is a true "band" or a "project", but I think the combination of elements here is excellent.  Schulz is a very strong singer who is able to handle the most powerful tracks here, as well as the semi-ballads that pop up in a couple of places on Cup Of Tears.  The rhythm section is stunningly tight, and I am amazed at the talent of Wanders on the drums, who must be in some absolutely fantastic shape to play the rapid-fire tempos, patterns, and rhythms he plays throughout this record.  I was pleased that the keyboards here aren't too out front or AOR-ish, as I think that would have done some serious damage to a few of the tracks here.  Of course, it would be impossible to review this record without going on and on about the greatness of Mae on the guitars.  Whether its the acoustic work on "Final Breath", the Middle Eastern feel of "Hollow Point", or the numerous places throughout the album where he just screams across the frets, threatening to melt the strings.  I am seriously needing to seek out his work in other projects, as this guy is impressive.  I'll be seeking out Schulz's previous efforts, as well.

I was sent only a preview digital copy of the album, so I don't have any liner notes and I have no idea which guest guitarist plays on which songs.  When I get my CD, I will update this section of the review, as there are some solid guest names here, especially Karlsson.

The production on this album is excellent to my ears, as everything is very crisp and sharp, with no muddiness or over-powering by any particular instrument.  I have heard a few people say they don't think its mixed "metal enough", but I'm not really sure what they mean by that, as I love the mix here.  Again, Devoid is not a pure power metal band, nor are they a pure progressive metal band.  They lie somewhere in the middle, and they absolutely dominate this territory.  Here's hoping for a quick return from Shad Mae and Devoid, because there is nothing to not love about this record!

Rating:  The most crankable melodic metal album I have heard in some time!  9.5 for Cup Of Tears

Posted by arttieTHE1manparty at 11:20 AM