HOUSE OF LORDS "Saint Of The Lost Souls" 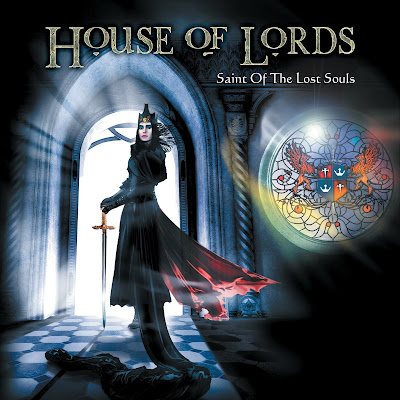 House Of Lords returns again with for what has turned out to be a nearly-annual appointment with the melodic hard rock world, with the 11th studio album...and third in 4 years...Saint Of The Lost Souls.  Following what I felt was a fairly lackluster album in 2015's Indestructible, and with the departure of long-time bassist Chris McCarvill, James Christian, Jimi Bell, and BJ Zampa regrouped with new bass player, Chris Tristram, and have put together quite possibly their best album since 2009's Cartesian Dreams.

Indeed, it is a rare instance that a band maintains its style, its sound, its approach, and the great majority of its key players for a full decade.  House Of Lords, however, has managed to do even better than that, as Zampa and Bell have stood alongside Christian since 2005 and have produced seven albums that, even at their worst (the previously mentioned Indestructible and the largely maligned World Upside Down), are among some of the best melodic hard rock in the genre.  With this newest album, the band again proves why so many people point to House of Lords as the standard bearer for this type of hard rock.

The album starts with "Harlequin", which had me a bit concerned at the outset due to the plinky-plinky keyboards that were being used, but my fears were allayed about 1:30 into the track, as a maniacal laugh disrupts things and Bell's guitars come charging into the fray, bolstered by the always impressive drum work from Zampa.  It is nice that right off the bat, the impact of the bass from newcomer Tristram is felt, as sometimes bands have a way of overcompensating in other areas so that the "new guy" can get his feet wet.  Not here, as Tristram's bass is a definite impact player right here on the very first track.  Of course, the main draw for me is, and always has been, the supreme talent of James Christian.  His smooth-yet-slightly-raspy vocals have drawn me in since the band's debut nearly 30 years ago, and nothing has changed here.  An impressive solo from Bell is thrown into the mix for good measure, and it seems apparent from the get go that the band is out to make up for the last album...although I don't know that any member would indicate that they weren't fans of the last record.

"Oceans Divide" continues down the hard-rocking-yet-melodic path, with Christian actually lowering his range a bit more on the verse sections than I would say is typical, and it works very well.  A big, sweeping chorus, one of the HoL hallmarks, is present here, of course, and Bell again works his magic on some serious fret burning runs, and the rhythm section is, again, in fine form.

"Hit The Wall" betrays its name a bit, as this turns out to be the first slower, AOR-ish number on the record.  Ah, were this to have come out about 27 years ago, I have no doubts that it would have been a player for Top 40 attention, as this is such a smooth, perfectly performed mid-tempo track that it would have crossed over perfectly.  Bell offers up a truly inspired solo run between the last two choruses, and the catchy, sing-along chorus would have been on the lips of anyone who had snagged this album before going out to see the band live.  Just a great, great tune for a summer night...

Speaking of slower numbers, "The Sun Will Never Set Again" is one of those ballads that bands throw into the concert mix for the couples in the crowd.  You know the type...the ones that are so smooth and so chock-full of AOR sweetness that Zippo lighters seemingly spontaneously spring from their owner's pockets and burst into flame as Christian croons "the day will come, the day will come my friend, when this will end...and when my soul transcends, the sun will never set again..."  A nice mix of acoustic and electric guitars, a sing-song backing vocal section, and excellent, clean production add even more to this noteworthy tune that I am guessing will become a live staple for the band.

The rocking returns with "New Day Breaking" and "Reign Of Fire", with the latter track utilizing some of the harder-edged guitar tones the band has recorded in a several years.  Don't let that fool you into thinking this is some sort of metal turn by the band, however, as this is still pure melodic arena rock of the highest form, with some interesting keyboard moments mixed in with Bell's dominating work on guitar.

While on the subject of Bell's work, the shredding solo on the title track is one that simply must be heard, as it is a great piece of art on probably my favorite song of the record, even if the atmospheric keyboard intro takes a bit too long to bring the full band blistering into the mix.  Easily the fastest, hardest rocking track on the record, this is the type of song that I would absolutely LOVE to hear the band tackle for an entire record....okay, minus one of their big ballads.  True greatness here, my friends!

Concussion" is a bluesy, bump-and-grind styled rocker, which is pretty cool to hear the band work with, while the three closing tracks are all solid, mid-to-uptempo numbers, with the closer, "The
Other Option" being another of my favorites from the record.  I was expecting a ballad with that title, but it turned into one of the better rockers here.

The production from Christian and Zampa is excellent and serves the overall feel and sound of the record extremely well.  I do wish the keyboard intros on a few of these tracks had been trimmed back a bit, as that's really not my thing, and in a couple of places they are almost distractingly long ("Harlequin" is a perfect example).  There is a bit of a tempo drop-off in the second half, so maybe a slight track rearrangement would benefit the overall flow of the record, but these complaints are minor.

All in all, I would have to say that Saint Of The Lost Souls likely clocks in as my fourth or fifth favorite album by the band in their 11 album catalog, so that says something about how good it is.  It will take a lot to displace the likes of Sahara, Cartesian Dreams, or the self-titled debut record from the top of the House Of Lords heap for me, but Saint Of The Lost Souls puts up a decent fight.  Definitely a contender for a slot in the Top 17 of 2017, but with so many great albums out already this year, that will be a tough list to crack.

Rating:  Definitely a crank-worthy return!  Spin this up to 8!