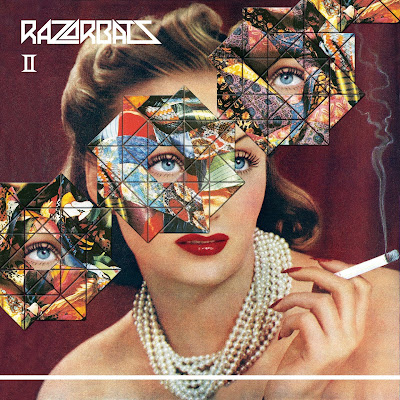 When last we checked in with Norway's Razorbats for an album release, it was 2016 and the band had just released their EP, This High, a tasty little record that followed up the massive success of the G2G Album of the Year for 2015, Camp Rock.  Things seemed to be humming along nicely for the Nordic rockers as they combined their love for 70s classic guitar rock with bits and pieces of punk, 80s sleaze, and modern rock, churning it all up and serving up some of the catchiest retro rock I have ever feasted my ears upon!

But, in an almost predictably cliched turn of events, life threw a few curves at the band who were suddenly faced with some tough decisions.  During the recording of II, Lead vocalist Even Berg left the band, only to be shortly followed by Stig Saetevik, both of whom had performed on the band's previous releases (including their vinyl-only debut, Bring It On).  Guitarist and primary songwriter, Kjetil F. Wevling, and drummer Knut S. S. Wettre, were left with two options...push on or hang it up.  Fortunately for us, the remaining Razorbats are not quitters!  Scrapping the partially recorded vocal tracks, and most of the bass tracks, the band recruited Hollywood Vampires' lead vocalist, Paul Vercouteren, and Kill City Bandits' bassist, Chris Haugerud, then pulled in a fifth member for the first time, with new rhythm guitar player, Asle Tangen (who joined the band in time to provide backing vocal tracks), and set about the task of kickstarting the II album process.

The new version of the band remains stylistically very similar to the band that blasted onto the scene with their gritty guitars, gang-shouted backing vocals, and catchy, hooky 70s-inspired classic rock, but there are differences.  Vercouteren's vocals, for instance, are a bit lower in register, and the addition of a second guitar gives the songs a bit more musical depth in spots.  The bass seems a bit beefier in the mix this time around, as well, which adds a bit more thump to a couple of the tracks.

The band has already released two singles from the album, with "Social Rejects" and "Sister Siberia" being the chosen introductions to the new band members and album.  "Social Rejects" has a definite 70s guitar rock-meets-Blink 182 pop punk feel, with a bouncy, gang-shouted chorus and a simple-yet-catchy guitar hook that snags you upon your first pass through the record and repeatedly drags you back.  "Sister Siberia", meanwhile, is a more sparse mid-tempo rocker with a big bass line and a singable chorus that borrows a bit from the 80s hard rock scene.  You can check out the video for "Social Rejects"...or click over and stream "Sister Siberia" at this link.

As for the rest of the album, I think the best tracks have yet to be released, with personal favorite "Dead Boy City" being one that I seriously hope is given every opportunity to rattle people's speakers with its deep, throbbing bass line (one of the two tracks Stig still appears on), and the angry sounding, shout-along chorus that I simply can't shake from my brain!  I can't even begin to count how many times I have hit repeat on this track...or skip just to get to it...as it is so infectious and is audio bliss for this guy!  The drums fully support the bass line here, and the guitars just saw their way through the chorus sections, with a tasty solo from Wevling briefly carving itself out between the true chorus sections (I say "true chorus sections" because song-crafter, Wevling, teases the listener with the shouting of the song title early on, tricking you into thinking there is one more chorus section than there is...).

"The Waiting" kicks off the album, with a catchy guitar riff atop some rather snappy bass work from new member, Haugerud.  The gritty rhythm guitars carry much of the weight on  this uptempo 70s-meets-80s rocker which also features a quick Wevling guitar lick exiting the first chorus that is reminiscent of the main riff from Faster Pussycat's "Bathroom Wall", followed by an equally tasty, full solo out of chorus two, with some excellent group backing vocals thrown into the mix for good measure.  "Take It Out On The Road" is pure Nazareth worship from the get-go, with a straight-outta-"Hair Of The Dog" drum-n-cowbell intro leading into another catchy guitar rocker that also features hand claps, more layered group backing vocals on the chorus section, and a couple of great guitar sections from Wevling.

Other standouts for me would have to be the two closing tracks here, "Send In The Clowns" and "Talk All Night", as well as the Cheap Trick-inspired, "Bad Teacher", which has a great, great chorus that is all sorts of sing-along material, and features some really solid backing vocals and a cool mid-song change of tempo that slows things down just a bit before a small, simple solo from Wevling before ramping back up into the final chorus.  Were it not for "Dead Boy City", "Send In The Clowns" would be my favorite track here, with its "Ballroom Blitz"-esque intro that charges headlong into the fastest track on the record, which then segues into the album's big ballad, the nearly 6 minute long, "Talk All Night".  I really like the dynamics of this song and the incorporation of female vocals from Annette Gil are a nice touch. Vercouteren sounds in top form on "Talk All Night", and the track reminds me of some of the slow dance material of the pre-power ballad 70s and early 80s...the songs I always had to sit out at the skating rink because it was "couples only".  Yuck!  No, not the song...the song kicks ass...it's.the slow skating sweethearts that forced me off the rink and into the little arcade in the snack bar that I'm yuck-ing here.  Ah...childhood...where have you gone, Olivia Newton-John?  Anyway....good good stuff here that you don't normally hear from the bands that trend toward the more classic rock side of things, as they all seem to go for the lighters-in-the-air moments and don't use the ballad opportunities to add atmosphere and depth to the overall flow of the album.  I have to say I was very impressed with this track, but it really shouldn't come as too big of a shock, as the Razorbats have shown themselves more than capable of handling slower material, especially with "Born In The Fast Lane" from  This High, and "Desolation Highway" from Camp Rock.

As with Camp Rock and This High, a lot of credit has to be given to the production on this record, as it is absolutely spot-on for the style of music being played.  Never heavy handed, and understanding that sometimes the spaces between the notes of a song are every bit as important as the notes themselves, the mix and feel of II is pretty much perfect.  The guitars, in particular, have just the right amount of fuzz drizzled across the sound to sound authentic to the style, which a lot of bands miss,  I think.  Vercouteren's vocal mix here is excellent, and I hope the band does me a bit of a favor and records some live material so that I can hear his take on songs from Camp Rock (did you catch that, Kjetil?).  I also can't say enough about the rhythm section here, as newcomer Haugerud melds perfectly with the understated playing from Wettre.  It will be interesting to hear where the band goes with their sound once Tangen gets the chance to add his rhythm guitars to the mix.  In the end, however, it always comes down to songwriting, and Wevling has this art form down to a science.  There is not a weak track on this album, which Kjetil wrote by himself with the exception of one co-write on "Nowhere" from former vocalist, Even Berg.

The packaging is about as simplistic as it can get, with just a double-sided front cover on the digipack that features band info, writing credits, and little else.  There are no lyrics and no pictures of the band, but that is of little consequence here, as the band has ZERO issues with English...and we don't really want to look at the guys anyway, right?

The bottom line, this is a simply great album that I have been playing repeatedly since I got it.  If you can't have fun with Razorbats' II album, do everyone a favor and don't go to parties...you're lame, boring, and would just bring people down.  II is neck-and-neck with Camp Rock for me, and G2G readers likely know where that record ended up.  Could we see a repeat in 2018?  Time will tell, but don't wait to find out....get the album yourself!  Pre-orders are available HERE.

Rating:  Supremely crankable!  Razorbats continue to hold the line at 9.0 with II.