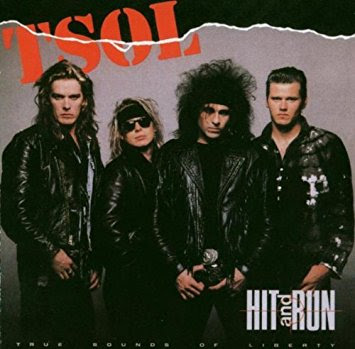 T.S.O.L., or True Sounds Of Liberty, was an oddity in my record collection back in the day.  I remember buying this album brand new when it came out.  I took it to the counter to pay for it and the guy at the counter, Jeff, a friend of mine who was a couple years older and who knew my musical tastes, looked at me and said, "Are you sure?"  I wasn't sure what he was talking about, as everything about this record said I would love it.  The image on the cover was right up my alley, and none of the song titles really struck me as being anything I would shy from, so I wasn't sure what the issue was.  We chatted for a minute or two about where the band came from stylistically, but I decided to take a shot anyway and took Hit And Run home with me.

To say that I got what I thought I was paying for would be a lie.  What I didn't know at the time was that T.S.O.L. was originally something of a goth-meets-punk band from the late 70s/early 80s, and not the L.A.-inspired version of the band that was sneering at me from the cover of the cassette album in my hands.  When I first popped the tape in, I loved the simple, raw guitars that were blasted at me and the stark nature of the song's structure, but I was also completely taken aback when I first heard Wood's very punkish snarls blaring out at me on the album's opener, "It's Too Late".  Later on, I would come to love the similar sounding songs, with Jetboy's "Feel The Shake" being an instant comparison for me both in style and tone, but at the time, I seriously wondered if the wrong music had been recorded on my cassette...which of course would have been odd considering Wood was singing the song's title in the chorus.  I liked it, but I didn't know why...or how much...and I wasn't sure I would like where the album went from there, but I decided to keep going (which I didn't always do when I was a kid with seemingly disposable income).

I let things continue to play, and "Road Of Gold" came on.  Definitely showing the band's more gothic-sounding influences, especially in the vocals and the guitar tones, T.S.O.L. sounded to me like a rawer version of The Cult, whose Love album I already owned.  "Name Is Love" only further solidified that opinion for me, as a very angry sounding Wood spit and snarled at me over the top of some decidedly punkish rock that featured some pretty furious guitar work.  The next track, "Dreamer" has something of a Doors-meets the Cult-meets Lies-era GnR quality to it, and is still one of the tracks that draws me in...despite my oft-stated disdain for the Doors.

The next track is a little known blues cover song, "Good Mornin' Blues", which features some really cool saxophone work from Bill Bergman, and a thick, prominent bass like from Roche.  Wood's angry delivery style works surprisingly well on this song, which is odd considering you would likely never use words like "soulful" or "bluesy" to describe the raspy snarls and shouts Wood uses to get his lyrical ideas across.  The guitar tones here are also decidedly subdued and very 40s/50s sounding in their tone, which makes sense considering the original version of this song came out in the late 30s/early 40s.

The band cranks the attitude and the speed back up for the title track, a rockabilly punk number that has a catchy guitar riff and super-simplistic drum pattern to bolster Wood's snarling vocals.  There's a cool tempo shift in this track on the bridge after the second chorus that finds Wood actually singing for a few lines, and sounding very much like The Cult's Ian Astbury...at least for a few lines...

"Not Alone Anymore" is one of the songs people point to as an indicator of how good the band could sound and how musical they could actually be.  Incorporating the previous Cult influences with sections that would remind many people of R.E.M., especially on the verses, "Not Alone Anymore" shows a musical diversity that was definitely not present on their older, far more punk releases that I later went back and gave cursory spins to.  It is clear with songs such as "Not Alone Anymore" and the next track, the far more L.A.-sleaze sounding "Sixteen", that the band was attempting to grow musically and to shake the punk label that they had been burdened with.  In fact, nearly everywhere on the second half of this record, the band could be found to be stretching themselves musically, attempting to evolve.  "Stay With Me" is a track that I think could have supported a video fairly easily, with its catchy guitar hook and goth-meets-glam stylings, and the album's big ballad, "Where Did I Go Wrong", with it's raw emotion and gritty honesty, is better than 90% of the saccharine power ballads that would later litter the radio waves.

The album closes with an all acoustic number called, "You Can Try".  Featuring a refrain of "You can't help someone who's not willing to help themselves, You can try, but you just might waste your time...", the song was an an anti-drug message recorded in memory of guitar player, Ron Emory's brother, who had died of a heroin overdose just a year or so before the album came out.  Its a haunting, chilling way to close the record, with the last words on the album being the abruptly clipped off, "You can't help someone". 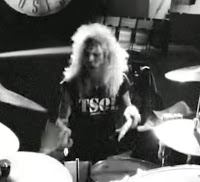 The production was, much like the songs themselves, very raw and very dry, with no real polish or enhancements thrown in at all, even on the more gothic-sounding songs.  The album isn't pretty, it isn't "fun", but it is an interesting slice of the Hollywood scene that is largely overlooked.  In fact, I can think of self-released albums...demos, really...that got far more attention that Hit And Run, despite the fact that T.S.O.L. toured with Guns N Roses and Steven Adler wore a T.S.O.L. shirt on the video for "Sweet Child O' Mine".  The album did manage to chart on the Billboard Top 200, hitting a peak of 184, but falling off rapidly after there was no successful single release from the album.

In the end, Hit And Run is an album that I find myself returning to every few years, giving it a spin or two to see if it recalls any feelings of nostalgia for me.  It's far from a great album, in my mind, and wouldn't even scrape the bottom of the shoes of the band holding the 200th slot on an imaginary Top 200 of my all-time favorite records, but it is one that I am glad I took a shot on.  It obviously meant something to me as I replaced the cassette with a CD a few years later, and I still own the CD to this day.

To say it doesn't hold up well after 30 years would be unfair because, in all fairness, it didn't hold up that well in 1987, at least compared to its peers.  Still, there are a few good songs here...mostly on the second half....and it is worth giving a spin to if you find it at a decent price.

Rating:  Rock it at 5.5, largely an average-at-best record bolstered by a couple of pretty good songs on the second half of the album.