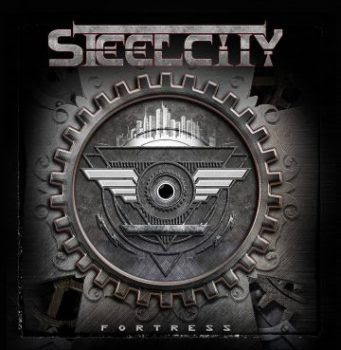 It is a true treat for me when I come across a band that is able to create an album that sounds like it could have come straight out of the glory days of the 80s melodic hard rock scene, before everyone was trying to copy the sound of everyone else and not doing anything on their own.  New bands came out that sounded like new bands, not clones of someone else.  Steel City is one of those bands that truly "gets it", when it comes to the sound and style of that scene, and they do it the right way, incorporating the big arena sound of the 80s with strong songwriting and top-notch musicianship to create an album of songs that is catchy and comfortable, sounding like it could have slid into rotation among the Whitesnakes and Bon Jovis and Dokkens and Slaughters of the era.

What is immediately noticeable about Fortress is the powerhouse combination of musicians at work here.  Floros is an absolute beast on the guitar, whether setting the stage for the vocals with his rhythm work or working his magic on a fingers-flying solo.  McCloskey's drums have that huge, pounding arena sound that is so clearly missing in so many similarly-styled bands, and the bass work, whether from West or Talanca, perfectly completes the foundation upon which these hook-laden melodic gems are built.  To have a huge, powerful vocalist such as Bryan Cole belting out the lyrics is just proof of the embarrassment of riches that is Steel City.  At times recalling the early vocal power of a singer like Marc Slaughter, such as on tracks like "Heart And Soul", and of course the Vinnie Vincent Invasion cover "Back On The Streets", while at other times possessing a very Michael Sweet vocal quality, such as on "Someone Like You", Cole is a supremely talented vocalist with an easy movement throughout his entire vocal scope, never sounding like he is straining to reach the rafters nor bottoming out to plumb the depths of his range.  Add in some excellent backing vocals, courtesy of Floros, and you have a massive wall of sound blasting you with waves of guitar-driven, vocally-charged, high energy melodic rock.

While there are no weak tracks here, there are four that I think deserve special recognition.  "Turnabout" may be my favorite track on an overall excellent album.  The echoing backing vocals on the title word in the chorus are absolutely perfect, Floros' guitar solo is mesmerizing, a combination of fluid speed and melodic sensibilities, and the double-time drums driving their way through the chorus section coming out of the solo are the perfect touch to really set this song apart in my mind.  Cole's vocals are just insanely strong here and the band sounds as if it was having an absolute blast while recording this track.  If this song isn't blaring our of your speakers as you cruise down the highway, my guess is you drive a Prius, chase unicorns, and eat only nuts, berries, and other gluten-free plant products, because this song is pure, driving balls-to-the-wall melodic hard rock at its best.  An easy contender for Song Of The Year here at G2G!

"Too Little Too Late" has a Bon Jovi quality to it in places, especially on the bridge to the chorus, while Cole utilizes a vocal approach similar to Michael Sweet that, when coupled with Floros' guitar work, is not too far removed from Stryper's mid-to-late-80s peak.  Smooth and polished where necessary, but with enough edge to the guitars, "Too Little Too Late" would likely be the song that carries many other bands' albums, while here it enjoys the company of so many other high quality tracks that it isn't forced to do all the heavy lifting on its own.

"Passing Ships" is a slightly mid-tempo number that isn't so much highlighted here for its musicianship...which remains top notch, with a great solo and outro section from Floros...as much as it is for its vivid story-telling...not to mention a fun use of nautical terms throughout the track!  The song's protagonist was enchanted by a beautiful woman "in [a] flowered blue sundress" who was "easily a diamond worth any cost"...perhaps a sailor's siren?  But with hurricanes, the eye of a storm, being lost at sea, and coming under siege...this is a relationship that was obviously doomed, despite the "shadows dancin' 'cross the bedroom wall" and the "warmth and grade of [her] touch".  Just good, good lyrical stuff here that is completely absent from so many songs that either try too hard to be deeper than the ocean (see what I did there?!) or come off as shallow as a...dang, couldn't pull that one off, but you get my point.  An excellent example of big time songwriting.

"Rock! In The USA" is just a flat-out fun song that lets the band show off its talent on an upbeat rocker that will likely come blasting out of your speakers once you punch that time clock on Friday, and cause you to threaten the speed limits of your local highway if it is in the player as you are out cruising about (unless you are in that previously mentioned Prius).  When I first saw the title, I was wondering if it was a cover of "R.O.C.K. In The USA" by John Mellencamp...John Cougar...John Cougar Mellencamp...whatever he calls himself now...but I can happily report that it most definitely is not a cover...although, I'd be lying if I said I didn't like that classic song.

Okay, I lied...I have to mention five specific tracks, because I would be totally remiss if I didn't give a nod to the album's closer, the cover of the Vinnie Vincent Invasion classic, "Back On The Streets".  Similarly powerful, the song is given a bit of an update by Steel City, with a bit more melodic polish to the vocals, the incorporation of more prominent keys, with just a touch less speed through the guitar solo.  A fun way to close out a stellar debut record and a perfect way to showcase the fact that had it been around in 1989, Steel City would have fit into the scene absolutely perfectly...minus the sky-high hair and copious amounts of eyeliner and blush.

The production here is excellent, courtesy of Johnny Lima, who does an outstanding job of bringing out the talent of this group of musicians.  The packaging, as is expected with Kivel Records products, is top notch, as well, with full lyrics and writing credits, a thank you section, and a cool album cover.  The only thing missing is a band photo of some sort, but as grievances go, this one is of minimal importance.

Steel City is uber-talented, make no mistake, and they have set the bar for themselves extremely high with Fortress.  If you have not already sought out this record, you need to do so immediately, as you are missing out on an album that will have to be in consideration for album of the year when 2018 wraps up.

Rating:  Extremely crankable, I have yet to play this album only a single time through when I pop it in.  Crank this to 8!

Posted by arttieTHE1manparty at 9:21 PM