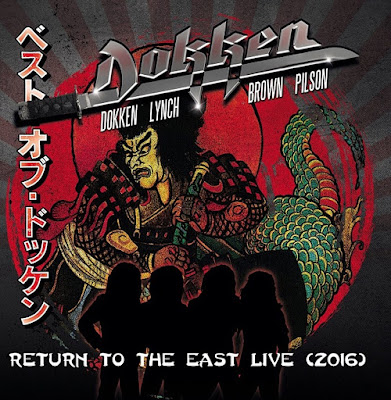 Let me open by saying I absolutely love classic Dokken.  Those first few albums, up through the "original" version of this album, Beast From The East, are must-haves from the 80s, in my opinion, and I really, really like later albums, Erase The Slate, and Lightning Strikes Again, as well as Don's solo record, which I also feel is practically essential to the collection of any melodic hard rock fan.  But the line-up issues with the band, the vocal issues of Don, the apparent ego issues of Lynch, and some very hit-or-miss albums in the latter half of the band's catalog have left me feeling rather hollow about this band for pretty much the last decade.  So when I saw that the band was releasing a live CD/DVD package of their 2016 reunion mini-tour of Japan, I had to quote "It's Not Love" and ask, "why, baby, why?"

The album starts off in what many would consider to be reverse fashion, with a brand new, full-band track, "It's Another Day".  It took me a few listens to fully appreciate the track, but I have to admit that I like it more and more with each spin.  It is definitely not Under Lock And Key or Tooth And Nail Dokken, by any stretch, but there is little point in denying it is a Dokken song.  Yes, it has a bit more of a modern approach to it than the classic hair era stuff, and no, Don has nothing of the range he used to possess, but I like the darker, edgier feel that Don's vocals bring to this song.  It feels a lot like a song from the more recent Jon Levin-era of Dokken, and doesn't have the feel or flair that Lynch brought to so many of the band's most memorable songs, but it's got a decent hook, the chorus works well with the help of Pilson on backing vocals...which was always a huge boost for the band...and I think most fans will find themselves liking it, even if its for the nostalgic reason of having the full band back together.

To close the album, we have two acoustic reworkings of classic Dokken tracks, both of which are perfectly suited for the acoustic treatment.  I know that "Heaven Sent" is the bigger of the two tracks, but I have always thought "Will The Sun Rise" is one of the band's most underappreciated moments, and this acoustic rendering just adds to that.  Don's voice actually works perfectly with this approach, as does the choice of percussion instrumentation utilized here.  I'll admit to being reticent to hearing these acoustic tracks, initially, but I can honestly say they are actually the high point of the record for me now, especially "Will The Sun Rise", which I think has something of a haunting quality to it here.  Love it!

And in the middle...the live set.  The first thing that will likely be obvious to anyone who picks this up is that the track order for the CD and the DVD are totally different.  I mean not even close.  Now, I have not seen the DVD (nor do I plan to), but the CD certainly feels like it is running in the correct order, based upon live performances I have seen personally, previous live recordings, and just the flow of the album.  And we all know that live crowd noise can be easily manipulated in the studio, so I can't say for sure which track order is correct, and in the end I suppose it doesn't really matter...it's just...weird.

Musically, the band sounds really good.  Considering they hadn't all played together in quite some time, the band is actually very tight sounding.  The set-opening "Kiss Of Death" is a great example of a band that is lock-step right from the start, with Brown's galloping rhythms on the drum setting the tone immediately.  No, it doesn't sound like Beast From The East, but it sounds a lot better to me than Live From The Sun or the rather poor-sounding Japan Live '95.  Pilson and Brown have always been a...ahem..."beast" of a rhythm section, and that continues here.  There is a reason both men are so well-respected throughout the industry for their talents, particularly Pilson, and there is nothing in this live set that would detract from the great work of their catalog together.  But it doesn't matter who is playing bass and drums for this band...for most, it's about George Lynch.  And Mr. Scary doesn't disappoint in the live setting, as he effortlessly rips through solo after solo on these beloved songs, sometimes playing them note-for-note perfectly, and other times toying a bit with the arrangement or length.  The intensity isn't quite what it was on Beast From The East, but there is also a TON of speculation about how much that album was touched up in the studio, especially by Lynch, what with the band being at the peak of their popularity and album-selling prowess.  This record feels more organic, less "tweaked" than Beast... does, at least to me, and Lynch is a big part of that.

So....how about Don?  Well, there is good and bad.  Surprisingly, the good is that there are songs where I think his new vocal approach actually works really well.  This is largely due to the fact that he has seemingly accepted his limitations and has adjusted his approach, rather than helplessly try to force himself to reach pitch heights he couldn't get to with a ladder now.  And I'm actually fine with this adjustment.  As I said above, it actually works incredibly well on the new acoustic studio tracks, and is equally effective on several live tracks here.  But note that I said "several", and not "all".  There are a couple of places where Pilson's backing vocals are so much more powerful than Don's that it sounds pretty bad to my ears.  "The Hunter" is one such song.  And then there are songs where Don's changed register actually sounds somewhat off key, with "Into The Fire" being the most notable culprit in my mind, and one point in "Kiss Of Death" pops to mind, also, as Don seemed to really want to go for it, octave-wise, before remembering to back off.  There'e aren't many places like this, and overall, the backing vocals really support Don and serve the songs well, "Unchain The Night" being an excellent example, and "Dream Warriors" being another.  Plus, there are times when Don's more subdued approach makes a song like "It's Not Love" come off a bit darker, edgier, maybe even angrier than the original, which surprisingly isn't a bad thing.

One thing that I feel must be said about Don here....and which has been said about him seemingly forever...is that he sounds, well, bored at times.  He's always been a singer, not an entertainer, as a front man, and always seemed to have his feet nailed to the floor.  Now, obviously I can't "hear" if he is moving around, but I can say that in the places where he addresses the crowd here, he just sounds like he's going through the motions and isn't having any fun in his interactions.  And, having seen them live several times, I can say I have ALWAYS felt this way about Don.  He was always so serious about his vocal performances that I sometimes felt like he forgot that rock shows are supposed to be fun, spontaneous, and energetic, not necessarily technically perfect.

There are a couple of songs that I really miss from the setlist, with "Just Got Lucky" and the instrumental "Mr. Scary" being chief among them. (I wouldn't be surprised at all to learn that "Mr. Scary" was contractually left out of the set, focusing only on full-band songs, but I don't know that for a fact.) I also would have loved to hear the band do "Paris Is Burning" and "Walk Away" for this set, especially since "Walk Away" was the new studio track on the Beast From The East album.  Woulda been cool, right?  As it stands, the choices here are all pretty obvious and represent the best-known material from the era of the band where all four guys were together and not trying to kill one another.

The mix is pretty good...not amazing, but not bad...with some muddiness in places and a few spots where I think the vocal mix needs adjusting...but, again, it feels more organic, more natural...more live...than a lot of live albums do, especially today.  Again, mine is a digital review copy, so I can't speak to the quality of the DVD recording or the packaging.

I will admit that when I listened to this record the first few times, I really wasn't all that impressed.  In fact, I was semi-negative about it in a couple of early musings in some Facebook postings and discussions.  But with repeated listens, I have changed my tune.  Now, overall, I don't think this is a bad live record at all, and it has a couple of really, really good acoustic studio tracks that fans will want to grab hold of, as well as "It's Another Day".  But it's just that the live material has been done better in other places, specifically on Beast From The East.  In the long run, that is going to be the version and sound of the band that I would prefer to remember live.  Its the sound of my youth, and neither I, nor the band, are of that era now.  And let's face it, when we seek out live albums, its generally for nostalgic reasons, and I'd rather remember the 1988 version of Dokken...and sometimes (not often, but sometimes) the 1988 version of myself!!!!....than the 2016 version.  Do yourself a favor, however, and buy the three new tracks, even if you don't want to buy the entire package, as they are worth the time and money.

Rating:  This mostly-live album definitely rocks.  I give it a 6.5 overall, with crank-worthy nods to the new tracks, especially "Will The Sun Rise", which is simply amazing.

Back To Reviews Index
Posted by arttieTHE1manparty at 9:31 PM