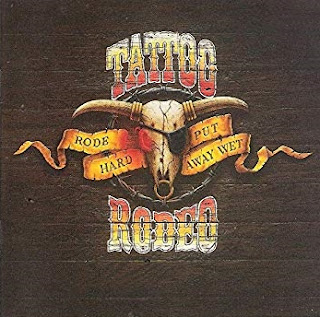 By 1991, the Hollywood Hair Scene was in full swing, and preparing to be in free-fall.  Labels were going out of their way to sign anyone and everyone who had the big hair look, often times overlooking the fact that they weren't particularly good musicians or songwriters.  It became increasingly hard to find original sounding bands, as everyone was looking for that next big radio hit, which meant that next big paycheck.  But with Atlantic Records' signing of Tattoo Rodeo, they got a band that had the look...even the pedigree, to a certain extent...but instead of getting a carbon-copy sounding hair band, the label got a southern rock-tinged hard rock band that sounded very little like most of their contemporaries on the radio.  And that, my friends, is a GREAT thing...

For the uninitiated, Tattoo Rodeo was formed from the remnants of a semi-successful hair band known as White Sister.  That band managed to place songs on multiple move soundtracks, and seemed poised to potentially break big with a couple of solo records.  As was often the case at the time, however, things didn't go the band's way, and Churchill-Dries, Chadock, and Wright moved on from that failed effort and formed Tattoo Rodeo.

Altering their sound to a pretty large degree, Tattoo Rodeo left behind the mid-80s Hollywood sound and incorporated a lot of southern rock and bluesy classic rock into their sound, which set them apart from much of the rest of the hair scene.  Sounding more like a harder-edged Black Crowes than Ratt or Poison, Tattoo Rodeo kicked things off in their own way immediately, as a steel guitar led in the opening track, the punchy rocker, "Strung Out" which finds Churchill-Dries affecting a gritty, bluesy lower tenor range and supported by strong backing vocals...and continued all the way through to the end, with "Hard Like A Rock" starting off much like "Strung Out" does, with an acoustic steel guitar leading the way and Churchill-Dries dripping southern swagger all over the blues-stomp barroom rocker.  And as good as these two songs are, they are merely bookends on an excellent, at-the-time-original sounding record, as the shoulda-been-huge, bluesy-smooth ballad "Been Your Fool", and the catchy rocker "Everybody Wants What She's Got", are two of the stand-outs of the record.  "Ain't No Reason Why" is a fun, foot-stomping rock number with a easy to sing chorus, nice gang backing vocals, and solid bass line, and "Love Shuffle" is a rollicking drinking song that utilizes a saloon-styled piano and simple-yet-snappy drum line to move things along nicely.  "Tell Me Why" is a bit more contemporary-sounding...yet no-less effective...power ballad, and "Shotgun Johnny" is the band's southern-fried homage to Zeppelin, with some of the album's best bass and drum work and a big "Kashmir"-styled guitar hook.  Good, good stuff.

At 13 tracks, the record does get a tiny bit bloated, and I would have cut a couple of songs here...perhaps saved for the band's second (and final) effort, Skin N Bones (later repackaged as just Skin).  "Down" just doesn't work as well for me as most of the material here, and "Blonde Ambition" feels something like a redo of "Everybody Wants What She's Got" lyrically, but in a less-fun, less-catchy way.  Again, definitely not a horrible song, but not really necessary with so many other good things going on with the rest of the album.

The production is really good, overall, especially when considering this album is now 27 years old, and the style is so different from what most people were playing at the time.  The tone and sound of the guitars is especially strong here, and Chruchill-Dries has an excellent voice for this style of music, and I wish desperately that this band had managed to be bigger than they were.

This CD is one that is a constant go-to for me, and is so painfully easy to find for under $10 that I don't know why more people don't know of it or own it.  If you are a fan of the era...and especially if you are into early Black Crowes or Bon Jovi's Blaze Of Glory stuff... but are looking for something that falls outside of the typical, I'd strongly recommend Tattoo Rodeo and Rode Hard, Put Away Wet, which is going to be much easier to track down than their later effort.

Rating:  Still crankable all these years later!  A definite 8.5 for me!

Back To Reviews Index
Posted by arttieTHE1manparty at 8:47 PM