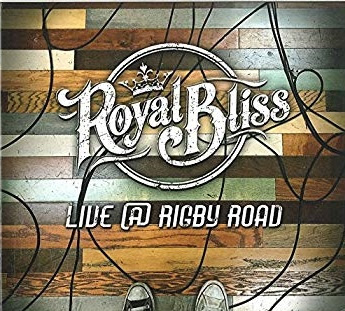 Utah's favorite rockers, Royal Bliss, treated some lucky fans to an up-close-and-personal, mostly-acoustic live show...and were kind enough to record it for the rest of their fans to hear.  Live @ Rigby Road was recorded in April of 2017 at Rigby Road Studios in Salt Lake City, and while I don't know the exact number of people in attendance at the show, the sound of the live crowd would seem to indicate no more than 50 people, likely, although I could be way off on that number, as the crowd is not mic'ed at all.  The song selection for this live set is an interesting one, as it forgoes some of the band's better known songs in favor of older material, cover songs, and a couple of singles.

The album opens with a brief intro from the show's emcee, before Middleton welcomes the crowd and the band launches into the rollicking acoustic rocker, "Goin' To Hell" from the band's last studio release, The Truth.  A high-speed picking affair, "Goin' To Hell" is the perfect song selection here, as it not only serves to showcase the tightness of this band as well as the power of Neal Middleton's vocals.  No studio trickery here, no overdubs, no vocal enhancements, just the band and their voices and all acoustic instruments for this particular song, and they pull things off expertly here.  Of particular note is the clean picking from Hennesy on the solo here.

Up next is a cover of Rod Stewart's classic hit, "Forever Young".  The theme song of hundreds of elementary, middle-school,and high school graduations for three decades, "Forever Young" is a great cover for this band in this setting, as it affords them the opportunity to stretch out past their country-tinged, hard rock sound into a more pop-centered style, which the crowd obviously enjoyed.  Middleton sounds excellent here, choosing to stay within his own particular range and style, forgoing the temptation to try to add unnecessary rasp or a higher tenor to his vocals.  The piano from Walker Gibson is a perfect complement to the song, as well, and really helps to pull things together.

"Into The Night" is one of my favorite songs on this record, as it really represents how the band has been incorporating a bit more rocking country to their sound.  An insanely catchy chorus and "I know I've heard this before" songwriting give this track a fun, uptempo energy that is just infectious.  I truly hope to get the opportunity to hear this song live at some point, as you can just hear...no, feel...how much the band is enjoying themselves here.  While taken from a different acoustic show, this video for "Into The Night" captures that same magic that I am talking about on this record.

"Fire Within", I believe, is a brand new song recorded just for this live album, and it is a good one.  Foregoing the countryesque sound of some of their other songs here, "Fire Within" is more of a modern alternative rock song.  Once again, strong vocal command from the underappreciated Middleton is really showcased here, as well as on the next song, "Racin'", another track from The Truth EP.  Don't let the title fool you, if you are not familiar with the song, as "Racin'" is anything but a high-speed affair.  Rather, the song is a poignant ballad about the loneliness of the road and the desire for the song's protagonist to get home to his loved ones.  I was somewhat surprised the studio version of this song was not released to country radio/video outlets, as I thought it would have crossed over nicely.

Middleton tells the crowd that "These Days" was released as a single "about a month ago", which it was as a digital single.  One of the more "electrified" tracks here, "These Days" has a definite modern-Nashville feel to the hook, but Middleton's vocals have so much more soul than pretty much anything coming out of the Country Capitol...ahem...these days...that the song really wouldn't fit in with the country scene now.  The studio version of this track can be found below...

The band digs into their catalog a bit for the next two tracks, as "Sweet Rosie" comes from the band's 2006 effort,  After The Chaos II.  A stark ballad that is basically Middleton, Hennesy, and the accordian of Gibson (along with some assorted percussion), this track features some excellent Spanish guitar work from Hennesy and the always powerful, soulful, and gritty voice of Middleton.  An excellent deep cuts track from the band, which leads nicely into one of the first tracks I ever heard from Royal Bliss, in "Crazy".  Found in two different versions on my favorite album from the band, Waiting Out The Storm, this version of "Crazy" stays true to the original, but is perhaps given a bit more urgency in the acoustic setting of this record.  Once again, the piano from Gibson is an excellent addition here, and Smith's drums pack a confident punch as it teams with Crawford's bass to provide a backbone for the rest of the song to flesh itself out across.

Another single, "Cry Sister", from Chasing The Sun, follows next.  Starkly different than the hard-hitting rock of the studio version, this live effort has a haunting feel to it, especially with the acoustic strumming, the urgent piano line in the background, and the strong support from some great backing vocals.  Kudos to the band for not playing it safe with this one, and a big hats off to Hennesy for an inspired, powerful acoustic guitar solo here.

Fan favorite and a single from 2008, "I Was Drunk" finds its way onto the live record next, as Middleton introduces the guest musicians and the crew, the band's sponsors, and then toasts the crowd.  Taken from the band's 2009 studio effort, Life In-Between, this track has become a staple of the band's live shows, acoustic or electric, and is generally a raucous affair live, with the crowd providing much of the backing vocals on the chorus, which they are encouraged by Middleton to do here.

More conversation from Middleton and the band members brings about a brief break before the band breaks into "Fine Wine", which Hennesy tells the crowd is the "oldest song we still play".  It is given a decidedly countrified facelift on this live acoustic record, and while the band sounds like it is having fun with it, the crowd doesn't seem to indicate it is overly familiar with it, as there isn't really any crowd interaction with the song at all.

A hidden track, "Home" closes the record, and is basically Middleton...and the crowd...singing along to a tamborine, an acoustic guitar, and an accordian.  A fun number, it is likely "hidden", as there is really no musical quality to this song at all, as everyone seems to have enjoyed their fair share of liquid entertainment by this point, and are simply wrapping things up with the band they love.

Nothing fancy, no frills, but a lot of fun and pretty entertaining, Live @ Rigby Road captures the talent and passion of a band that more people should appreciate...and likely would appreciate, if they could get any kind of consistent label support or airplay.  I've had the opportunity to meet and interact with the guys, as well as hear them perform live, and they are incredibly talented and extremely personable and friendly with their fans.  While not really a representation of what you will hear at most Royal Bliss shows, which are generally fairly hard-edged, high-energy rock shows, Live @ Rigby Road is a nice introduction to several older songs and really gives the new fan an indication of the talent of the band and Middleton's amazing voice.

The packaging here is about as simple as it can get without being a slipcase, as this is an outside/inside cover digipack with pictures of the musicians featured on the recording, and a group photo of the band and their guests, along with some thank yous to their sponsors and some recording info.  Were my scanner not on the fritz, you would see that my copy is signed by the band, which is a cool touch. You can get YOUR OWN signed copy here, if you would like.

Rating:  I have a hard time ranking live albums, especially intimate affairs such as this one, which aren't necessarily designed to be commercial releases...but what the heck.  Crank it to 7, just to have some fun.

Back To Reviews Index
Posted by arttieTHE1manparty at 8:36 PM