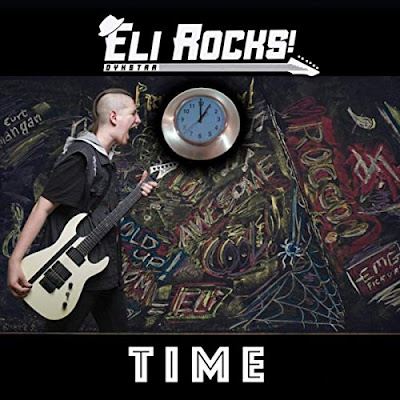 If you search through the list of reviews on this site, you will find there are not a ton of instrumental albums in the archives.  And, honestly, that's a bit odd, because I actually really like guitar instrumental records, especially those of the shred variety.  Its just that its fairly hard to find any really good shred records that come across my desk.  I get an odd instrumental disc every now and then, but usually they are so whacked-out and experimental I am automatically turned off.  But when Ron Keel mentioned to me that I needed to keep an eye out for a 17 year old guitar whiz...from Iowa, of all places...who plays the outro solo on "Rock N Roll Guitar" on the Ron Keel Band's effort, Fight Like A Band.  It was from this brief introduction to his skill that I was intent upon finding more of this young man's music.

Time is the latest release from the gifted guitarist, who wrote, played, recorded, and produced everything on the album.  Blending modern hard rock rhythm guitars with incredibly rich and deep melodic leads, Dykstra reminds me of a modern Marty Friedman, whom I felt released one of the most powerful shred albums of the 80s with Dragon's Kiss, and who, along with Jason Becker, released two absolutely essential metal records as Cacophony, with Speed Metal Symphony and Go Off!.  The sheer note density of a track like "That Lady", which finds Dykstra absolutely blistering his way through an extended lead run, is reminiscent of the great shred records in Shrapnel Records' halcyon days.

Time is cleverly kicked off by "The Beginning Of Time", which is a short, mood-setting piece that wraps in just over a minute.  The drums are pretty solid, if not overly spectacular, but the juxtaposition between the hard charging rhythm guitars and the smooth flow of the melodic leads are what the listener should be tuning in for, because once Mr. Dykstra starts on this record, he never lets up, right through the appropriate ending track, "The End Of Time".

It is difficult to pick favorite tracks here, as each one has its own personality and mood.  That being said, I have to say that I am particularly drawn to three cuts.  "Dissed" has a big, epic feeling, especially with the opening keys slowly building anticipation before an angry, aggressive rhythm guitar rips through the serenity of those keys.  A few hard-charging riffs later, a melancholy lead guitar line rings across the soundscape, creating a melodic counterpoint to the angst of the rhythm guitats.  Great stuff.

Another favorite track is another aggressive rocker, "Revolution".  Much like its title would suggest, there is an angry tone running throughout the track, especially when the rhythm guitar crunch their way onto the scene, yet the lead guitar work is, much like in "Dissed", nearly the polar opposite, carrying a much more melodic tone, with areas where the notes seem to hang in the air forever as Dykstra coaxes the life from his strings, while at other times there is such a flurry of fretwork that it seems nearly impossible the way Dykstra's fingers blur through the notes.  The drums here are spot-on, in my opinion, and the bass work serves to further bolster the aggression of the rhythm guitars.  Awesome, awesome song.

The third song I chose to really highlight is one which Dykstra recently released a video for..."The Leader".  As with everything this guy does, Dykstra did the video entirely by himself, and this also happens to be the first video he has ever made.  If you look closely, you will notice that Dykstra is playing a 7-string guitar in this video, which is not overly common in the style of instrumental albums I come across, so I was curious as to if there would be a significant difference in tone or quality of sound.  All I can say is extra string or not, Dykstra absolutely delivers on this track, both on lead and rhythm guitar.  In fact, one of the things I really love about this song is that at about the 2:09 mark in the song, the rhythm guitars become the focal point of the track, while the lead guitars are shifted more to the background, rather than the usual leads-out-front style.  To me, this gives the song a different feel than many of the others here, and adds a sense of urgency to the leads, as if they are screaming to be heard, only to be drowned out by the angry shouting of the rhythm lines!  Give the video a look and see if you agree...

I know I said I was only going to run through three "favorites", but "That Lady", which is the epic of the record at 6:26 in length, also deserves special recognition, as it really allows Dykstra to showcase the full range of his skill.  Moody in places, aggressive in others, with areas of blistering speed and, alternately, laid back finger strumming on a the bedrock guitar line for the majority of the song...and even a gentle piano section near the beginning of the track....all blend together into a truly beautiful song that honestly leaves me in awe of this young man's talent on apparently any instrument he chooses to play.

Oh, and what the heck...a special shout out goes to "The End Of Time", also, as rather than simply playing it safe and dropping in a simple outro to mirror "The Beginning Of Time", Dykstra closes the album proper with more aggressive rhythm riffing and several big, melodic lead runs that are both intensely fast in places and gorgeously drawn out in others.

There are two bonus tracks added to this album after "The End Of Time" wraps up the album-proper.  "Serial" is perhaps mislabeled as being an acoustic effort, as while the rhythm guitars are acoustic, there is a fully-plugged in lead guitar that rocks full-on as hard as the majority of the record, with string-scorching fret runs and exquisitely emotive passages, as well.  And while not the best overall track on the record, the inclusion of Dykstra's first demo...from WHEN HE WAS 12!!!...is an absolute stunner to hear.  "Flashback" appears in both this demo form and in a newly updated, fully produced version on the album proper, and it shows the growth the musician has gone through, to be sure.  However, the speed with which the younger Dykstra played, as well as how cleanly he played at such a young age, is something that a lot of more seasoned players would do well to take note of.  I'm assuming this was a self-composed track, as well, and while the programmed drums are simplistic and the production is fairly thin, especially when compared with the excellent sound on the rest of the record, this 2:40 riff explosion deserved to be heard by others and I am glad that it is included here.

The packaging is simple, as it is just a slip case, and what you see in the picture above is what you get, as the only thing on the back is the track listing and the copyright info, as well as the simple notation, "All music written, recorded and produced by Eli Dykstra Rocks!".  Apparently, the only thing Dykstra didn't do was take his own cover photo, which was credited to Shawn Hudgins on the back.

Shredheads, I apologize, as I know nothing about his equipment other than the previously mentioned fact that he plays a 7-string LTD guitar in the video (which has the EXACT OPPOSITE color scheme of the 6 string he is holding on the album cover, which I personally missed until Dykstra pointed it out to me!), and he endorses that he uses Curt Mangan strings and EMG Pickups.  Perhaps at some point I can get an interview with Dykstra to get more information to those of you who are as much into playing as you are into listening.

Rating:  A stunning effort from start to finish, crank this brilliant work to a 9!