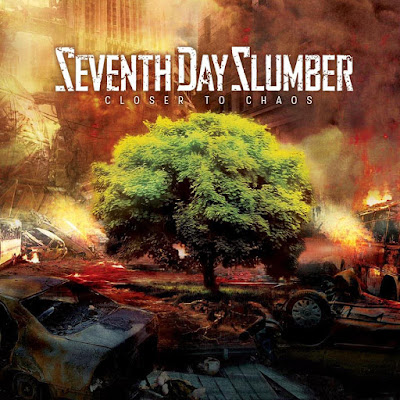 I've been on board with Seventh Day Slumber for several years now, going back to when I first heard the band in a live setting (I was there to see another band, truth be told) as they were on tour to support their then-new release, We Are The Broken.  Since that time, I have managed to track down just about every single release the band has put out, and I have found varying degrees of enjoyment with each release.  From the post-grunge beginnings found on Picking Up The Pieces to the modern radio rock success of the previously mentioned We Are The Broken, the Redline EP, and the band's last studio effort, Found, the band has managed to continue to grow bit by bit, subtly altering and updating their sound, while never losing track of who they are...and definitely never compromising on their message.  And, while the band has had numerous Billboard #1 and Top Ten hits, two number one albums, and more than 500,000 albums sold, I always felt the band was still searching for that album that was going to truly define who Seventh Day Slumber is and what the 7DS sound really is.

With Closer To Chaos, I believe they have found that album!

The songwriting on this record is simply a step, maybe even a step and a half, ahead of anything the band has put forward up to this point.  And, with the list of accomplishments I rattled off for you above, that really says something!  But there is a cohesiveness to the writing here, as well as a maturity, that wasn't always present before.  Where every previous album had about three...maybe four...great songs and one or two filler tracks, surrounded by nice but not necessarily noteworthy tracks, Closer To Chaos tightens things up significantly!  Nowhere to be found are the filler tracks, and nothing here is forgettable at all.  With writing contributions from both Joseph and Blaise Rojas, as well as Josiah Prince (Disciple) on three songs, the band carves a melodic-yet-modern path through the rock landscape with each and every track here.

Just because the album is full of great songs, that doesn't mean there aren't a handful that really grab my attention.  Take, for example, the album's first track and lead single, "Alive Again".  After a brief build, the rhythm guitars and punchy drums jump straight to the front of this mid-tempo hard rocker about wanting to be able to be the real you and to put your best foot forward, not having to put on a fake smile and just make it through the day.  Holderfield's guitars carry an aggressive edge with a stop-start-stop-start chugging approach that is executed perfectly here as it drives the track forward.  It's also nice to hear Ken Reed's bass so even in the mix, as the bass seems to either get buried, or totally BLASTED in the mix on a lot of rock records now, but here, we get the perfect blend of present but not predominant from the bass.  Joseph's vocals are powerful here, particularly on the bridge section, and I am constantly in awe of how easily he slides across certain sections of this track (and many others), coming across like he is having a conversation with you with his delivery style.  I love it!

"Burning An Empire" is an extremely powerful song and a commentary on how our society devalues itself.  The second verse, especially, really punches the listener in the gut as Joseph eloquently lays out the abortion debate from the viewpoint of the pro-choice crowd...

"We are the ones who decide/Who lives and who dies/We let the unborn pay the price...
Its all just murder for hire/So you can fill your desires/As we go on with our own lives.
What will it take to see the mess you've made?
We're Burning an Empire...."

The whispered vocal bridge is every bit as powerful here, as well...

Its a truly haunting statement about what society values and what it discards, and it is a song that I can never get through without hitting repeat at least once.  This song is definitely in the mix for best track on the album.  Musically, its equally great, and while SiriusXM will ignore it, this track could (and should) share the airwaves without anyone batting an eye until they got to the lyrics.  An awesome, awesome song!

Speaking of songs that get repeated, the powerful "Man Down" ranks as one of the very best tracks this band has ever put onto a record.  Starting (and ending) with the sounds of war, the song soon leads the listener to the realization that the sounds are the soundtrack to a nightmare being had by a soldier with PTSD.  A truly powerful message about the men and women who continue to live and relive the hellish experiences of war, even when they return home, "Man Down" should be picked up by any number of military and police organizations that work with survivors.  Co-written by Blaise Rojas, "Man Down" is quite likely my favorite track on an album filled with excellence.  The guitar tones are as haunting as the subject matter, and the chorus rings in my head for hours after hearing the song...literally.  It gets stuck and I can't get it out...

Big drums, a powerful bass presence, and those haunting guitars all combine to make an incredibly powerful song that, again, should be all over the airwaves!  Request it, hashtag it to Octane or your favorite terrestrial station, do whatever you can to get this important song out there!

The follow-up track, "The Letter", delivers an equally powerful message about the issues of cutting, self-harm, and suicide, issues I work with on a regular basis in my real job.  The gut-level honesty that 7DS approaches these songs with is what makes them so powerful in my mind, and this track sounds like it was likely written as a compilation of hundreds of letters and conversations with hurting fans throughout the years.  There's some nice modern production elements dropped into the mix leading into a tasty little guitar solo, and again the drums and bass just punish the bottom end of this track.  Good, hard-hitting stuff, both musically and lyrically.

"Sober" is another cold slap of reality as it tackles the issue of addiction and the use of chemicals to mask pain and depression.  As a teacher who works with juvenile offenders, this song really hit me hard, as it is the soundtrack of so many of my students' lives when they are dealing with parents who are substance abusers.  But it was these lines, lines of hope, that really cause my eyes to sting...

"I wanna medicate/But I gotta sit through the pain.
To tell the truth/I almost picked the bottle up again.
I made a promise to my kids
Daddy's never going back, no matter how hard it gets!"

The chorus, however, is such a pleading look at pain and self-medication that it hurts to listen to.  Musically, the guitars take on an angry, crunchy tone, with some electronic elements buried way in the back just to lend support and fill in the rare instances when the drums and guitars take a quick breath!

The record's closer, "Your Eyes", is an excellent, hard-hitting rocker that closes out this excellent album in perfect fashion.  Crunchy guitars, rumbling bass, big drums, a supporting keyboard line, and some great backing vocals (big WHOA's!) on the chorus section all combine on this track about self-worth and seeing oneself the way that Christ sees us.  For me, this is the perfect track to close the record...and then restart Closer To Chaos all over again!

This is an excellent record from start to finish, and I didn't even get to touch on all the great tracks like "Drama", with it's big hook and catchy chorus, or the gritty, chunky "Cold Kiss Embrace", a song about moving away from toxic relationships and toward being healthy and happy with oneself!  There simply isn't room to give each track here the written love it deserves!

Band founder, lead vocalist, and rhythm guitarist, Joseph Rojas is in especially fine vocal form here.  I don't think he has ever sounded better, to be honest.  Always smooth, always melodic, there is a depth and power here that was not always present on albums past, at least not all the way through.  But on Closer To Chaos, Rojas is one-hundred percent in full control of his range, his emotional depth, and his vocal presentation.  This sounds to me like an album where the band worked at finding exactly the right vocal take on every track to get the sound they were after, and it pays big dividends here.

It's also worth noting the growth in Blaise Rojas' playing.  He has definitely matured as a musician, with his drum patterns and fills becoming more and more interesting, bringing an energy and life to the songs now, whereas on previous efforts he was more in "maintain the beat mode" in places.  And while that has worked (to a degree) for any number of drummers in the rock industry throughout the years, it is always a treat to hear a drummer not just rely on the same-old-same-old and to grow and challenge themselves, and the listener, with new ideas, new tempos, new fills, etc.  With his sound married to the impressive work of long-time bassist Ken Reed, the rhythm section has a fullness on the bottom end that few bands in the modern arena have managed to capture on a record that has crossed my desk.

Produced by the band's longtime, and seriously underrated, guitarist, Jeremy Holderfield, with co-production nods given to Disciple's guitarist, Josiah Prince, the sound here is crisp, aggressive, and beautifully mixed, without the muddiness that seems to really make a mess of a lot of the modern rock that has come out recently.  There are touches of production elements thrown into the mix, but overall, Closer To Chaos is about the band, not the studio, and the conservative use of production gimmicks should be applauded here, as my experience has always been that Seventh Day Slumber doesn't need them.  Having experienced the band live multiple times now, I can tell you they put on a great show, and with  Closer To Chaos, they may have some hard decisions to make for this next tour's set list, as there are a lot of new songs that need to be heard in the live setting, to go along with "We Are The Broken", "Bring It On" and "Oceans From The Rain"!

If you catch them live, post their set list in the comments section; I'd LOVE to find out what they are playing now!

Rating:  While there have been other really good Seventh Day Slumber records, this is easily the most crankworthy!  Crank this to an 8.5!