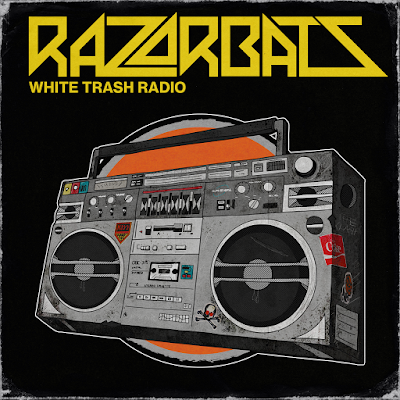 A classic rock guitar lick and a shrill whistly intro the song, with rapid fire drums building to the first verse.  This song is pure ear candy, with a catchy hook, some nice, fuzzy distortion on the rhythm guitars, and a stong, 70s-inspired guitar solo, complete with a cleaner-yet-still-powerful sound.  The production is perfect for the style, raw and edgy rather than the over-processed slickness of so much music today.  But for me, so much of the real magic of Razorbats is in the honest-and-humorous songwriting, and "White Trash Radio" is no exception.  The chorus is typical tongue-in-cheek humor from Razorbats.  The song, itself, is a reference to the fake front we put out on social media, showing ourselves as much better than the "white trash" that we know most of us are on the inside.  Following the humorous pre-chorus of "Fake it to the top!" Vercouteren sings on the chorus:

Lead singer Vercouteren continues to establish himself as the voice of the band, which was no small task for anyone who heard the band's first full-length release, Band Camp.  His lower-range vocals are spot-on throughout the song here, and I find myself actually preferring his approach to that of original vocalist, Even.  Vercouteren slips a bit of snarl into his vocals when necessary, but is easily understandable at all times, and he never sounds strained or off key.  While only Wevling remains from that first line-up, the band heard on "White Trash Radio" is my favorite incarnation of the group and 4 of the 5 have been working together since their sophomore release, II.  Torris Illievski is the new drummer for the band, filling the seat behind the kit in excellent fashion, showing off some nice double bass work in addition to the tight rhythms he drives throughout this track.  The twin guitars of Wevling and Tangen only get stronger with each release, and bassist Hervig, who even gets a few solo seconds to be heard coming out of the guitar solo, is rock-solid as ever.

Blazing along with plenty of 90s pop-punk speed during the intro and chorus sections, and backing off slightly during the verses to give the vocals a chance to expand, "White Trash Radio" is sassy and cheeky, filled with a fun, in-your-face attitude that Razorbats seemingly have cornered the market on.  I am so looking forward to a new full release from these guys, and Wevling has told me that the band is working with more self-production  and engineering and that a new album is hopefully on the way soon.  Until then, enjoy the brand new video, which was released just today, October 25, and was produced by the band, with Wevling directing!  Fun, fun stuff!

Rating:  I don't rate singles, per se, but I will tell you that if you have enjoyed what Razorbats have done in the past, there is absolutely nothing to not love here!  Track the new single down on their Soundcloud page.

Back To Reviews Index
Posted by arttieTHE1manparty at 11:06 AM