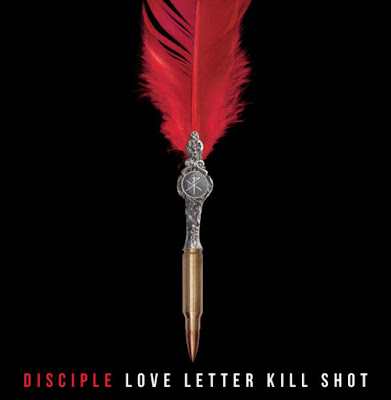 For the past three releases (Attack, Long Live The Rebels and the Vultures EP), Disciple had been going the fully independent route, utilizing crowd funding and massive on-line campaigns to get their music to the people.  For their latest offereing, Love Letter Kill Shot, Disciple has gone the more traditional label route, signing to one of the biggest Christian rock labels out there, Tooth & Nail.  I had heard some grumbling from fans, as many feared Disciple would be forced to alter their sound to fit the vision of the people at Tooth & Nail, and the release of the first two singles, "Cuff The Criminal" and "Reanimate" probably did little to allay anone's fears.  However, I am here to tell you that those fears are very quickly laid to rest.  If anything, Disciple has come out harder and heavier than they have in some time.  Love Letter Kill Shot is a perfect blending of the more radio-friendly hard rock of Attack and ...Rebels, while incorporating the more aggressive, heavier sounds of Horshoes & Hand Grenades, Southern Hospitality, or even older material such as By God.

Now, I understand people being a little skittsh about the previously mentioned singles if they were expecting songs in the vein of "Erase", "Long Live The Rebels" or "Dear X", because "Cuff The Criminal" and "Reanimate", which are the opening two tracks of the new record, certainly don't fit those molds.  "Cuff The Criminal" is an experimental, progressive hard rocker complete with effects on the vocals and a stop-start rhythm that probably threw the radio rockers for a loop.  And then "Reanimate" came out and punched those same fans square in the mouth, leaving that metallic, bloody taste behind, as this is truly one of the heaviest tracks Disciple has put out in more than a decade.  Ferocious guitars, crushing drums, harshly snarled vocals, and more speed than anything since "The Name", from Attack.  And if you were fortunate enough to hear these two tracks in the live setting (which my family was), then you had an even better understanding of just how different these tracks were from so much of their extensive catalog.  But if you really listened, it was evident that at the core, this is still very much Disciple.

Once you get past those two tracks, Love Letter Kill Shot starts to feel a little more familiar...at least briefly.  "Wake Up" is a modern hard rock track that feels like it could have slid onto ...Rebels with very little difficulty or modification.  But then, just when the listener is finding their comfort zone, they are slammed into the "Panic Room", which is a contender for song of the year in my book!  "Panic Room" starts off with a quirky interview between a psychiatrist and his patient, in which the woman tells her doctor she can hear voices in her head.  From there, the guitars absolutely explode in a fast and furious intro, then as suddenly back clear off to a more subdued, rhythmic track, complete with fingersnaps, for Young to layer the verses over.  And then, just before the chorus, Young admits to the listener "sometimes I scare myself"...and then BOOM!  Sheer aggression in vocal form blast forth in the form of Andrew Schwab of Project 86 as he bellows forth "I try to lock these thoughts inside a tomb, But it ends up being my panic room!  When the demons start digging up skeletons, The ghosts leave me with nowhere to run!", while Stanton and Prince absolutely shred their guitars.  A second creepy verse, a second chorus explosion, then a false ending with a blistering guitar solo threatens to blow my speakers!  At this point, a haunted house piano is added to the verse section, as Young adds even more creepiness to his vocals, before returning to his "sometimes I scare myself" pre-chorus, this time sounding like it is screamed through a wall of static, and then a final torture session with Schwab burns the song to the ground.  Simply amazing stuff from start to finish, and I simply can't make it past this song without hitting repeat at least once...usually two or three times.

"Play To Win" sounds a bit more in line with recent Disciple, except the guitar solo is more aggressive than most of the things they have done over the past three releases, and Young likely had to take a break in recording after this one, as I assume his vocal chords may have been shredded.
"Fire Away" is also going to be more comfortable for a lot of people musically, although the subject matter may not be.  Incorporating the album title, the song talks about God's Word being His "love letter" to his people, and the truth and honesty of those words are the "kill shot" that is "tearing through my soul 'til there's nothing left" as Young implores God to "let Your love be the weapon" that brings him to his knees.  Lyrically, this track could be something of a companion to "Dear X", although this track is far more aggressive than that massive hit.

Another of my personal favorites is the next track, "Misery", as it speaks so much to the world we live in today, as the second verse expounds upon the epidemic problems of today's social media world with "would you pay any attention to me, Without the drama of hashtags, so depressed...".  The chorus then declares, "I don't want help, I don't wanna get better/All I want is your sympathy./Can't stop myself, can't keep it together/'Cuz I'm in love with misery".  A hard-hitting social commentary, to be sure, and set to a great, fist-pumping rock anthem that is sure to be a live hit.

The hidden gem of the record for me is the album's closer, "Best Thing Ever".  While lyrically simplistic, I love the way the song is delivered, with Young chanting out to Christ, "You are the best...thing...that has ever happened to me!  The best...thing...that has happened!".  A nice, uptempo modern rocker that could possibly find itself into a more modern and progressive praise playlist, this is the perfect closer for one of the absolute best records in the now 12 album catalog of Disciple.

Lyrically, as always, Disciple is scripturally sound and socially in tune, with Biblical references for the vast majority of the songs' lyrics included in the full lyrics sheet.  "Panic Room" screams about anxiety issues and our desire to control everything, "Reanimate" is an interesting twist on the idea of Christ being the physical manifestation of sin for us, and "Chemical Wisdom" tackles issues of chemical dependency, both self-induced and prescribed.  "Never Too Late" talks about the opportunity to turn our lives over to God and "start again" because "it's never too late, if you're breathing!", and the lone ballad-esque moment of "Walk With Me" is a song of friendship with Christ.

Musically, the band continues to get tighter and tighter, with the comfort level among the men, who all contributed to the writing of Love Letter Kill Shot, seemingly never stronger.  Josiah Prince gets a couple of chances to step up to the microphone here, which work out well, and the twin guitar attack continues to explore new levels of aggression, experimentation, and harmony.  West is a beast on the drums, something that can be further appreciated in the live setting, as he absolutely tears things up.  But, as is always the case with Disciple, regardless of the lineup surrounding him, it is the passion of Kevin Young's vocals that are the driving force.  His vocals are so expressive, whether he is singing, screaming, quasi-rapping, or in some cases doing little more than talking to the listener.  Young just instantly draws you in, and never more than in the live setting, where he seems to make eye contact with the fans no matter where they are located, making his messages all that much more personal.  Add in the fact that long-time producer Travis Wyrick (with assistance from Prince) is almost as much a part of the band as any other member, and Disciple is a sonic force of massive proportions, virtually unequaled in my mind, in the Christian or secular musical world.

If listeners are seeking only what they have heard before, then Love Letter Kill Shot is going to be uncomfortable, and perhaps even scary at times.  But for those fans that have longed for the band to completely unleash themselves musically, lyrically, and thematically, Love Letter Kill Shot may be the album they have long been searching for.  Time will tell where the record stands for me in terms of top albums by Disciple, but for now, it is definitely at...or extremely near...the top of the heap.  As much as I have loved everything this version of Disciple has released, and as great as older albums like Horshoes & Hand Grenades, O God Save Us All, and the self-titled release were, Love Letter Kill Shot is on a different level for me.

It's going to take an amazing record to bump this disc out of my player, to remove it from the status of "favorite Disciple record", or to knock it from the perch of Album of the Year for me.
Rating:  So, so crankable and near to perfect for me.  This CD hasn't left my changer since I got it, and I don't see that changing soon!  Crank it up to a 8.5!