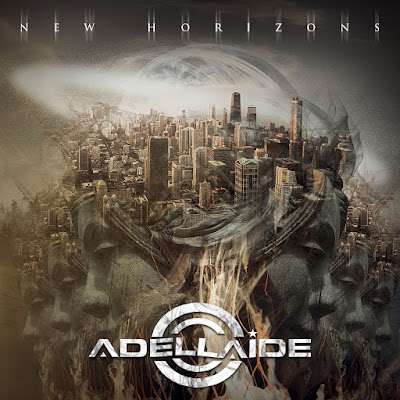 Adellaide is a Brazilian band that I only recently discovered when New Horizons showed up in my inbox.  Blending an obvious love for 80s melodic rock, AOR, and progressive rock, Adellaide is not really like any other band I have come across in some time.

For starters, as I mentioned, there is an obvious 80s element to the band, particularly in the song structures and the instrumentation.  But, I don't mean 80s as in "hair bands and Hollywood".  I mean 80s as in slickly-produced, Top 40 AOR stuff.  The band claims to be influenced by Journey, Survivor, Kansas, and Asia, and to be sure, there are elements of all of those bands on New Horizons.  But they come in small doses.  For example, on "Tonight (Once In A Lifetime)" there are times you can hear bits of Journey, particularly in certain guitar passages, but for the most part, and if you close your eyes and let your imagination run a bit, you can hear a bit of Kansas in the melodies and the way the vocals are applied to this piano-laden ballad.  The vocals are smooth, but heavily accented with some significant English pronunciation issues, but I can get around that, as this is not an uncommon issue with all the foreign bands I am exposed to.  No, my main issue is I feel like I need to visit my dentist after sitting through more than a handful of songs from Adellaide, as the music is just too slick, too sweet, too sugary for me to spend a lot of time with it.  And that's unfortunate, because there is obviously a lot of musical talent in this band, particularly in the guitar work of Balconi and the drums/percussion of Loureiro.

The album starts off with a spoken work intro for the first track "Robotica".  From the get-go, I think this is supposed to be a concept record to some extent, but for the life of me, I can't figure the story line out.  Anyway, the actual music of this track starts about 35 seconds into the track, and to be honest, the music is rather catchy.  Vargas's voice joins the track and almost immediately I hear Klaus Meine of the Scorpions, both in the pronunciation of certain words and in the tone he sings with.  There are also some odd, Mr. Roboto-type vocal effects thrown into the chorus, which I can work around.  After the second chorus, Balconi goes on a really nice, melodic guitar run that has me thinking Adellaide might really be onto something.  I mean, this guy is good, and as I said, the song is catchy, even if it is overly polished.

But when "Time's Hotel" kicks in, the album starts a slow slide into 80s high school movie soundtrack territory.  You know what I'm talking about:  a band is playing in the background as the movie's main characters dance in some sort of climactic plot point, as camera's cut to the feathery-haired lead singer crooning to the guitarist who bending his strings in a highly melodic solo...just before the keytar player wanders across the stage, and we cut instantly back to Molly Moore or Demi Sheedy or Ally Ringwald (see what I did there??).  This song...and really, the majority of the album...is just so slick that it doesn't even feel like rock, regardless of the tempo or the instruments being played.  And I feel bad because I WANT to like it!  Again, Balconi has some serious talent on the guitar, and once again his skill is on display here in an excellent solo.  But the overall feel is just too slick, too pop-infused, and too danged sweet to really enjoy.  Plus, this is one song where Vargas's enunciation is noticeable to me, because he doesn't use the "h" in his "th" sounds, so when he sings "you are my therapy" he's instead singing "you are my terapy"...and it just drives me up the wall!!!

"Nightfalls" has some great percussion/drum work to it, sounding a bit like Phil Collins in places, a bit like Men At Work in others, and I think it's a really cool sound that Loureiro has going on here, with some interesting patterns and tempos.  The guitars are really good, and the bass work is tight, but there are WAY too many keys for my liking, and there are some really bizarre vocal accompaniment sounds (not really singing so much as...squawking, maybe?) that just do serious damage to the track.

As I previously mentioned, "Tonight (Once In A Lifetime)" is really a pretty good track...probably my favorite of the album, to be honest....with some solid mid-80s Top 40 guitar rock song writing.  The song it reminds me of a bit, however, actually comes from the mid-90s, as there is something here that really makes me think of Foreigner's "Until The End Of Time".  As I stated above, the guitar work here has a Journey quality to it at times, and the use of the piano, rather than keyboards, is a very good decision here.  I can imagine taking Tracy by the hand and escorting her to the dance floor at my high school prom, as she smiles sweetly at me as she most likely thinks to herself, "Why the heck did I tell this mohawked musclehead I'd go to prom with him...again?!"  Errrr....anywaaayyyy...

"Ring Of Saturn" is a pretty straight forward rocker with a progressive bent, and isn't as obnoxious as some of the tracks here.  Again, the song's title and apparent sci-fi significance makes me think I am supposed to be catching onto some grand story here, but I'm totally missing it.  It sounds like I'm on repeat here, but the guitar work is top notch, the rhythm section holds the line very well, the keys aren't overplayed, and the vocals are largely really good (some odd sounds again, however), but the production just feels like there is a layer of sugary glaze that drips down and around the song, pooling up around the base of it and oozing around your feet as you stop to admire the musicianship, only to find yourself stuck to the floor!

"It's Just A Matter Of Time" is my other favorite track here, and that is owed in large part to the fact that I absolutely loved the first two Asia records.  The keyboard intro alone throws me right back to that classic Asia debut record, with the greatness of  "Only Time Will Tell" and "Heat Of The Moment".  There is ZERO doubt that there has been some time spent listening to that band and that record here, as "It's Just A Matter Of Time" is a pure 80s melodic/prog rock track of the highest order.  Really, really good stuff that I wish popped up far more frequently style-wise on this record.  Now THAT would be a record I could fall in heavy like with!

"Oceania" again has be trying to figure out what the story of this album is...and again failing.  As far as the song itself goes, this one isn't all that bad, honestly.  The keyboard tone is a bit too pingy for me, but the rest of the track is pretty good.  A good rhythm section, a bit of an edge to Vargas's vocals, and...you guessed it...a really good guitar solo.  I'm kind of starting to wonder if the album was backloaded, because two of the best tracks are in the lower 40% of the record.

"Paradise Grace" sounds like its going to return things to the sugary sweetness of most of the rest of the record, with far too much time spent on the keyboards that intro the track.  BUT...if you scan forward about 30 seconds or so, you get an 80s Journey-esque track, at least musically, although Vargas will never be confused with Steve Perry...or Steve Augeri...or Arnell-whatever-his-name-is. The rhythm guitars have a cool tone to them, the drums are very well done, and the backing vocals enhance what Vargas is trying to do.  The song itself isn't overly memorable, but its close to a standout on this record.

The album (mercifully) closes with "Together Again", which starts off with some 80s video game soundtrack keyboards, but finds itself morphing into a fairly decent mid-tempo rock track.  Not metal, not hard rock, just rock.  The backing vocals are straight out of Up With People, but the guitar solo is nice, the Asia-styled synth solo tagged onto the end of the guitar run is pretty cool, and Vargas delivers one of his better overall performances here.  So to answer my own question from before, I would have to say that this album definitely IS backloaded, because all but one of the best songs come in the final four tracks here.  Now, I'm not saying they are great songs, because they are not.  They are, for the most part, pretty good to good, but still, that's an improvement over most of the first six tracks.

The thing is, I don't think this is the fault of the band, at all.  I think most of the problems here are due to the glossy layer of polish poured all over these songs.  I'm betting if you hear Adellaide live there will be more grit, more edge, more...ROCK...in several of these songs.  But with the heavy-handed approach utilized here, the rock is never able to grab a foothold because it slips off of whatever edge it tries to push off of, leaving it to hang on for dear life while the rest of the song slicks right on past.  And that's an odd thing for me, because the producer here is none other than Tito Falaschi.  Wait, you don't know who that is?  Well, I'm betting several readers know who his brother is, as Edu Falaschi was the lead vocalist for fellow Brazilian power/prog band Angra for a stretch of four albums including the excellent Rebirth.  You would think with that musical pedigree, Tito might have a bit more of an idea as to what melodic hard rock is supposed to sound like, but maybe he wasn't paying close enough attention, or perhaps he was trying to make sure that Adellaide DIDN'T sound like Angra.  Whatever the case, I honestly feel the production does serious damage to many of these songs and really brings down the album as a whole.

Rating:  Just too much sugary goo to get through.  Rock this to a 5.5, but know there are a couple of really good songs, and some serious musical talent if you swim through the syrup to find it.

Posted by arttieTHE1manparty at 5:52 PM