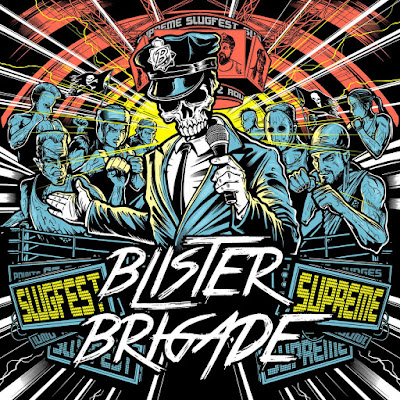 Blister Brigade is a classic heavy metal band from Sweden that completely hearkens back to the type of metal I spent so much of the early-to-mid-80s listening to.  I'm not talking Hollywood Hair Metal here, as it wasn't in fashion yet. I'm talking classic heavy metal of bands Accept, Saxon, Judas Priest, Anvil, Scorpions, Virgin Steele, and the like.  The music here is gritty, very riff-driven, and generally pretty catchy. with strong guitar performances, really solid drums, bass that can actually be heard in the mix(!), and vocals that are incredibly reminiscent of that early-to-mid-80s era.  Heck, even the production on Slugfest Supreme sounds like it is straight out of the era, adding an extra layer of nostalgic charm to the record.

The album kicks off with the dreaded intro.  Why do bands do this?  If you think it's musically interesting enough to include, why not just make your intro part of a song?  At least "Slugfest Supreme" is less than 90 seconds long, and to be fair, it covers enough musical bases that I am not really sure why it wasn't expanded into its own song.  So many intros are quirky instrumental numbers, but this has everyone involved, including the lead singer, so...I begrudgingly give Blister Brigade a pass on this intro.

The album proper starts off with a metallic bang, as "Ready To Crumble" kicks things off in fine fashion.  Immediately I am drawn to the vocals of Gustav Lund, because he sounds so much like someone else that it is making my brain itch.  It took several listens before I figured it out, but he sounds a lot like David Reece when he was with Accept...and that is a dang good thing!  As for the song itself, there is a lot of fast rhythm guitar playing, some equally fleet-footed work on the double bass from Lundmark, and a steady bottom end rumble from Gustavsson, which really establishes the band as solidly  talented!  The second guitar is great to hear, although I can't honestly tell you who is playing lead and who is playing rhythm, as both Lund and Strand are listed as playing both, and I don't have a track-by-track breakdown.  I like this song a lot, and I have to say I was pleasantly surprised by this point, as if I am being honest, I judged this band by its name and wasn't really expecting a lot from a band called Blister Brigade.  Sue me...

"Storm The Walls" continues in that early-to-mid-80s metal style, although I will say that the placement of this song right after "Ready To Crumble" feels disjointed, as the two songs have such different rhythms and tempos.  Regardless, the rhythm guitars here are top notch, and I really like the riff they have worked up here.   A double kick drum runs pretty much the length of the track, and some gang shouted, "hey, hey, heys" at the end of the track are a nice touch.  Not a huge stand-out track, but definitely a solid slab of old school metal.  Color me impressed at this point.

Things actually pick up from this point in the record, with "Arson", the second single from this record, making me really wish there was still a place to hear this kind of metal in the United States.  This is a mid-tempo rocker with a tough sounding bottom end with plenty of rumble from the bass.  The guitar solo is a great string-bender with plenty of power, even if there isn't a ton of flash, and Lund's vocals are in excellent Reecian form here!  Check out the video below:

"Through Murky Times" is an outlier here, in terms of style.  A much slower song than anything else on Slugfest Supreme, "Through Murky Times" is an acoustic-based, folky ballad, with an interesting musical presentation and a vocal style that is unlike anything on the record.  The acoustic guitars are really good, with a catchy riff  employed in the verse sections, accompanied by a piano and an excellent bass line.  The guitar solo that sears its way into the track is of the plugged-in variety, and it is played with a large dose of emotion and soul, as it should be due to the melancholy nature and structure of the song, overall.  The backing vocals are lower in register than the lead vocals, and they take on a semi-chanted style that is fairly common in heavy folk rock.  The track is really well done, but it is going to throw some people, I have a feeling.  The more I hear it, the more I like it and the higher it climbs on my list of songs that I really dig from this record.

"Through Murky Times" bleeds directly into "S.M.M.", which stands for Street Metal Mayhem, which is a pretty accurate description of this album as a whole.  Not overly flashy, but catchy and gritty, "S.M.M." builds the tempo until it hits a solid uptempo rhythm...that then speeds up even further with the short burst that is the guitar solo before a vocal bridge leading into the final run through the chorus.  Some galloping double-kick drums jump into the mix, and the lower-register guitar tones on the rhythm playing really add to the dirty feel of the track.  Not my favorite, but a solid rocker, nonetheless.

"Damaged Goods" has a sassy rhythm to it, bordering on boogie-woogie at times, but the deep, grumbling vocals Lund uses in part of the first verse keep things from getting too out of hand.  He drifts back into David Reece territory for the majority of the song, and it is in this range that Lund best operates, although it is impressive to hear the different ranges that he can work in.  A riffy solo section builds out of a brief moment of nothingness, soon accompanied by steadily building drums and gang-shouted "Damaged Goods!", before a final run through the chorus leads to the chug-chug-chugging end of the song.  Catchy stuff here.

"Disintegrate" drifts into a more late-60s/early 70s psychadelic rock feel at the outset, especially with Lund's vocal performance, but then blends in that classic heavy metal riffage from the rest of the album, giving the track an overall 70s classic rock feel that I can't help but really enjoy.  These guys know how to write a song, that is for sure!  The guitar work here is top notch, and while not flashy, the solo here...and pretty much everywhere on Slugfest Supreme...really fits the mood and groove of the song.

"Venomous Twister" comes storming out of "Disintegrate" at full-speed, with thrashy rhythm guitars and machine gun drums.  Released as a single from the album, "Venomous Twister" is Blister Brigade at their absolute best, I think, with Lund again sounding a lot like Accept-era Reese with the snarl and rasp of his vocals.  The guitar solo here has a bit of flash and flair not utilized in many other places, and the overall feel of the song is a bit like not-really-thrash-but-definite-speed-metal of early Helloween.  Definitely my favorite song out of a batch of really good material.

"Pounding The Deadbeat" as a rather humorous title, but the punishing groove and thunderous drums are nothing to laugh at here.  This song is thick, heavy, and rumbles deep along the bottom end, threatening to become a bit ponderous but never bogging down.  Lund adds a wicked sneer to his vocals here, and the quirky first-half of the guitar solo following the second chorus once again showcases the strong songwriting skills of the band.  This is another really well-crafted track that works in a musical style that nobody employs today.  Really, really good stuff.

The album closes on another higher-speed note with "Burn My World Alive".  Lundmark's drums continue to do a lot of heavy lifting here, as they have throughout the album, and he shows that he is fully capable of tempo, rhythm, and pattern changes at the drop of a hat.  The bass from Gustavsson is also given plenty of room to gallop here, and the twin guitars from Lund and Strand rip their way through this proto-speed metal romp that punctuates the album with a strong exclamation point.

Some people are going to squabble about the production of the record, but if they do, they are missing the point.  This is not supposed to pristine, slick, polished melodic hard rock/metal.  This is heavy metal of the old school variety.  As such, the production here sounds like what we used to associate with metal back in the pre-hair days.  Its gritty, its edgy, heck, you can almost hear the hiss and pop of the vinyl that this would have been grooved into back in the day.  I can't help but smile when I hear the sound, and get that same feeling I used to get from the early metal records I discovered as a teen.  This is what I believe the band intended, and they pull it off so very well!

Do yourselves a favor, overlook the band name, and pick up Slugfest Supreme if you are like me and you hold fond memories of those pre-hair metal days.  Blister Brigade doesn't reinvent heavy metal, but they do a fine job of injecting a dose of a forgotten branch of the genre back into the scene.  If you can't find something to like on this record, I have to question how much of a fan of those early metal days you really are.  "Through Murky Times" and "Venomous Twister" alone should do plenty to earn the most ardent metalhead's approval!

Rating:  Nothing is earth-shattering here, but Slugfest Supreme still cranks!  Crank this to 7.5!

Back To Reviews Index
Posted by arttieTHE1manparty at 5:25 PM