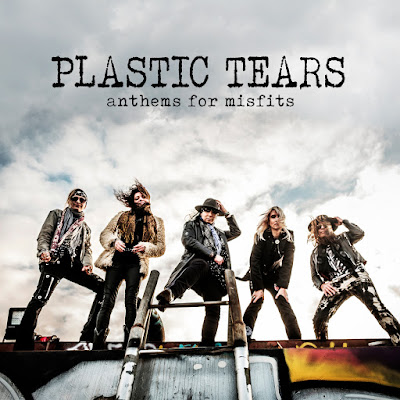 (c) 2021 WormHoleDeath Records
Miqu December--Lead Vocals
Andy Whitewine--Guitars
Juha Pietilainen--Guitars
Edu Kettunen--Bass
Eco Xtasy--Drums
It's been three years since Finnish street rockers, Plastic Tears, released their (to me) surprisingly good Angels With Attitude album.  Combining bits of sleaze and punk with an obvious love of/respect for Finnish legends, Hanoi Rocks, Plastic Tears created a musical environment on that record that I was in no way prepared for.  Could the band capture the magic again on Anthems For Misfits?  With the same lineup intact from the previous record, a new record label, and an entire pandemic's worth of time to craft songs, I had to admit I was hopeful for a record that was at least close to their last effort.  I was not surprised for a record that was even better, however.
As soon as the distorted guitars cut loose on the punkish glam rocker, "Doomsday Girls", it is evident the band is picking up right where they left off.  A rollicking piano is thrown into the mix here, adding even more fun to this barroom boogie track that is intentionally messy, exceptionally raw, and unquestionably fun, as Miqu and the boys tear through the album's opening cut and wrap things up in under two-and-a-half minutes!  Things are off and running for Anthems...right from the jump!
The album's lead single is up next with "Riot Zone", which abandons the piano in favor of even grittier guitars, an extra helping of sneer from Miqu's voice, rapid fire drum cadences from Xtasy, and fun, carnival-effects breakdown before the last run through the high-octane chorus!  Sound like a disaster waiting to happen?  I imagine it could have been if handled by a lesser-caliber band, but for Plastic Tears, a track like this is just another day at the musical office, and "Riot Zone" is a perfect example of what this band does best!  Check out the official video below.