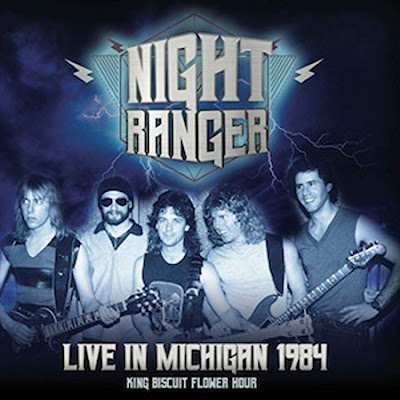 (c) 2019 Alive The Live (Japan)
Jack Blades--Lead Vocals, Bass
Brad Gillis--Lead Guitars, Backing Vocals
Jeff Watson--Guitars, Backing Vocals
Alan Fitzgerald--Keyboards
Kelly Keagy--Lead Vocals, Drums
It is truly hard for me to believe that Night Ranger is more than 40 years old, and that their first album, Dawn Patrol, will hit that four decades mark next year!  Being a fan of the band for as long as I can remember, Night Ranger has long been one of those bands that I always sought to keep a complete discography of.  However, it wasn't until the Covid Summer of 2020 that I discovered there was at least one live album missing from my collection--their King Biscuit Flower Hour release from 1984.
As a kid, I used to listen to these King Biscuit Flower Hour shows on a rock station I could tune in on my parents' stereo, and I knew that Night Ranger had performed on the show but I was unaware of any high quality recordings of the show.  I knew there were bootlegs of this show out there, but apparently a Japanese label known as Alive The Live has obtained the rights to properly release a lot of these King Biscuit Flower Hour releases, complete with artwork and liner notes, so I jumped at the chance to snag it.
Keeping in mind that this recording is nearly 40 years old (the notes say the show was from August 8, 1984), this is an EXCELLENT live recording of Night Ranger when they were really starting to take off on their own.  Recorded at Northern Michigan University in Marquette, MI while on the Midnight Madness Tour, this set really showcases a hungry young band that is really hitting their stride.  Think about where Night Ranger was at this time, musically:  "(You Can Still) Rock In America" had proven the band wasn't a fluke on their first record, "Sister Christian" was a massive hit, and "When You Close Your Eyes" was about to break big, as well, and the band was playing to very large audiences as headliners by this time.  The band is exceptionally tight, Gillis and Watson absolutely tear things up on guitars, and Blades...well, he sounds like Jack Blades, whom I regard as one of the truly great, classic voices of 80s hard rock.  Keagy sounds great, also, and I am struck by how powerful the backing vocals are on throughout this recording, as this was back in the days of, you know, actually performing your backing vocals!
The track listing here is a lot of fun, especially the non-singles that were chosen for inclusion here, as many of them are songs that don't see much in the way of live play now.  Of course, when a band is more than a dozen albums into their career, the hits become more important to the live shows than the album cuts, so its fun to hear "Call My Name" from Dawn Patrol, or "Passion Play", with it's extended guitar solo from Jeff Watson, or even "Eddie's Comin' Out Tonight", which used to get quite a bit of live love, but has been dropped in recent years, especially on shorter set shows.  Blades does some playing around with the lyrical phrasing to "Sister Christian", which will throw the home karaoke crowd off, but to me, these kinds of things only serve to add to the charm of a live recording.  There is also a brief feedback issue at the beginning of that song, and it sounds to me like Jack may have studio-dubbed the song's intro at a later point, as when he is finally able to get through introducing the song, the audience sound is completely gone for a moment.  Still, this is a small issue, and takes nothing away from the enjoyment of this rare show.
For the most part, there is very little gapping between the tracks here, although there is an obvious fade after "Eddie's Comin' Out Tonight" and a VERY sharp intro to "Call My Name" which leads me to believe there was some stage banter edited out to keep the show short enough to air.  There is also what sounds to be an edit in the encore between the introduction of the band and the lead-in to "(You Can Still) Rock In America", but again, this is likely insignificant to just about anyone who didn't spend years in radio, editing, and production classes, and again was probably done due to program time restrictions.  Of course, the extended drum solo from Keagy on "Night Ranger" could have been a timing issue, as well, but I'm glad that was left alone as these are the concert experience items that always kept my attention as a teen and even today.  Sure I want to hear the hits, but I also want to hear and see something that is NOT on the CD I can crank up at any given time at home.  This CD does a really good job with the flow to keep this sounding as live as possible, and the minor interruptions are mostly negligible.
I have been told that this is, perhaps, still considered a bootleg, as there is some question as to the legality of Alive The Live and their releases, but they have done a nice job here with the overall package.  Considering Night Ranger and King Biscuit both reportedly had a lot of their old material destroyed in separate fires several years ago, I'll snap up a package like this anytime I can if the quality is solid.  Live In Michigan 1984: King Biscuit Flower Hour goes beyond being "solid" and well into "excellent" live recording territory and is well-worth picking up if you are into live shows.
Rating:  Highly crankable, bootleg or not.  Crank this to an 8!
Back To Reviews Index
Posted by arttieTHE1manparty at 10:35 AM