CORY MARKS "Who I Am" 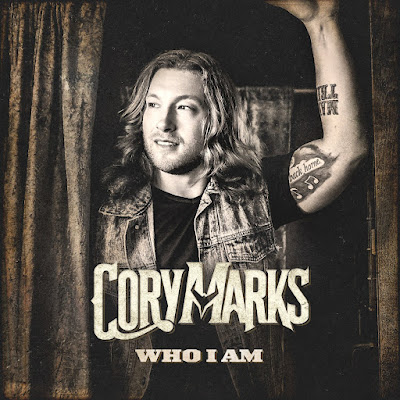 Go ahead.  Say it.  "That ain't a rock record...that's...that's...THAT'S COUNTRY!!!"  Tell you what.  You call it what you want, but as for me, I'll call it one heck of a record!  I mean, come on, the guy has Mick Mars playing guitar on a song (and Tommy Lee popping up in a video...more on that in a second), Ivan Moody and Jason Hook of Five Finger Death Punch, Tyler Connoly of Theory Of A Deadman, and Lzzy Hale of Halestorm on his debut record.  His DEBUT record!  The guy has some serious firepower loaded up in the part country/part rock double barrels of this record and he flaunts it all over the place!

For those who don't know...and likely don't care...I grew up in Nebraska during the 70s with the Outlaw Country Movement of Waylon, Willie, Kris Kristofferson and others, dreamed of being Johnny Cash, and frequently cited Merle Haggard, CW McCall, and Charlie Daniels as some of my favorite singers of my youth.  In the 80s, it was Alabama and Hank Williams, Jr., who you could hear mixed in with AC/DC, Lyrnyrd Skynyrd, Ratt and Bon Jovi, all at the same party.  I then spent close to a decade in country radio in the 90s, and while I was still a hard-rocker and a head banger by night, I spent a lot of my days drawn to the edgier, rock-influenced sounds of 90s country, with Travis Tritt, Restless Heart, Little Texas, Aaron Tippin, Confederate Railroad, Pirates of the Mississippi, Chris LeDoux and others being particular favorites.  And in the 2000s, I still find myself drawn to good, guitar-driven, rocking country from time-to-time, with Zane Lewis, Brantley Gilbert, Jackson Taylor and the Sinners, and even Jason Aldean being current faves.  All this to say that while I never betrayed, or strayed from, my rock n roll heart, there is a part of me that, given the right mood and the right artist, still appreciates the right style of country music.

Cory Marks is the right kind...

This album kicks off on a mostly country foot, albeit a punchy, uptempo one, with "Devil's Grin", which features plenty of driving guitar.  Yes, the subject matter is all country, with the country cliche of the Saint-n-Sinner girl drawing the good ol' boy in with her "angel's smile and devil's grin", but Marks puts a rollicking spin on it, whether with the rock guitars or the big, hooky chorus, complete with enough "oh oh ohs" to keep you singing along for some time.

The gears shift hard...and I mean HARD... with the lead single from the record.  When I first heard "Outlaws And Outsiders", I have to admit I was hooked instantly.  I mean, when a "country" record has Ivan Moody snarling "I was a crazy ass kid, and with all the sh*t I did, I'm lucky to be alive", you can't help but take notice, right?  Add in southern-fried country rock legend Travis Tritt (who Marks could easily be a vocal double for in numerous spots on this record), and an all-too-short guitar solo from Mick Mars, and what's not to love?  Moody doesn't compromise who he is...at all...and this is the type of song that Tritt always seemed to sneak onto his records back in his hey day, and both work perfectly on this track.  As I said, Mars' solo is WAY TOO SHORT...in fact, it's honestly almost too short to even really be considered a true solo, but there is an instant level of credibility that's obtained when you can pull talent of this level all in for one song.  Mix in that Marks wrote the song (along with the Churko brothers), and it's all the more impressive to me.  Honestly, if you're bitching about this track being "too country", then you just as well stop reading right here, because this is straight up hard southern rock with a twinge of metal mixed in.  Need proof?

Marks allows stunned listeners to catchy their breath for a second with the next track, as "Good To Be Us" is pure summer country radio ear candy with an instantly singable chorus and a catchy hook.  Slick and fun, this is the type of song that will have the country girls in their straw hats, sunglasses, cut-offs, and tank tops singing and swaying in the live setting, holding their beers in one hand while throwing the horns with the other, and I'm actually kind of surprised I haven't heard anything about it being released as a single yet.

"Blame It On The Double" is an excellent foot-stomping country rocker of the highest order, with Tyler Connoly of Theory of a Deadman sharing co-lead vocals, and Jason Hook, formerly of FFDP absolutely scorching the strings on his solo. Once again, the subject matter is one that is shared by both genres, although the lyrical approach is more country than rock, but that really shouldn't matter.  This track kicks ass, period, and is far more Donnie than Marie Osmond (don't get the reference?  Google it.) Don't believe it could work?  Check out the video below and keep an eye out for Tommy Lee dropping by, as well...

As is kind of the trend, Marks then goes back to a more country-themed track with "Another Night In Jail", but again, plenty of rock guitar is thrown into this slower-mid-tempo number.  Again, extremely well-written and catchy as hell, more than a few dedicated rockers are going to struggle with dismissing this song as just another country song.
Speaking of rockers, "Keep Doing What I Do" is another guitar-driven country rock track that namedrops Johnny Paycheck...and then drops an f*bomb...along the way, earning him both his 70s country rock cred and an "explicit" label for the song (not the first on the record, btw).  The guitars are dirty and gritty on this hard-living party tune that pretty much sums up who Marks is and what he does, which is pretty much whatever he wants to do.
Not everything works perfectly here, to be fair.  The ballad "My Whiskey Your Wine" is just way too saccharine for my tastes and is exactly the kind of country ballad that will have the rockers cringing.  To be honest, the same will be said by most on "Out In The Rain", which, to me, doesn't make the most of having Lzzy Hale performing on it.  If I was going to get Lzzy to sing on a song on my album, I would make sure it was a ballsy rocker, because the lady packs a vocal punch like few other in the hard rock world today.  To be sure, she adds some grit and sass to an otherwise overly smooth ballad, and her emotive voice plays well against Marks' vocals...I just wish they had more to sneer at each other about.
The first five tracks here are pure gold and make the album worth purchasing all on their own.  Add in the dirt road cruising anthem "Drive", the title track, and the gritty rocker "She's Hollywood" and you have a helluva record!  I'm not sure why "She's Hollywood" was relegated to "bonus" status, as it is easily one of the best tracks on the album, but it is worth checking out on its own, and it further cements Marks as a true country rocker.  Yeah, it intros with a banjo, but the gritty rhythm guitars and the flair of the solo is straight out of the rock world, as are the big, gang vocals on the chorus.  Bonus or not, this is probably my second favorite track here, and is definitely top three depending upon the day you as me.  As to whether you decide Lzzy Hale's contribution saves "Out In The Rain" or not, it still showcases the range and depth of the material here, most of it written or co-written by Marks, and there will be fans from both the country and rock genres who love it...or hate it.  All in all, there is just too much good material here to overlook Marks' debut effort, and I'm excited to see what...and who...he comes up with next for his follow-up album.

Rating:  Call it what you will, I call it crankable!  Crank Marks and Co. to a 8!

Posted by arttieTHE1manparty at 4:51 PM