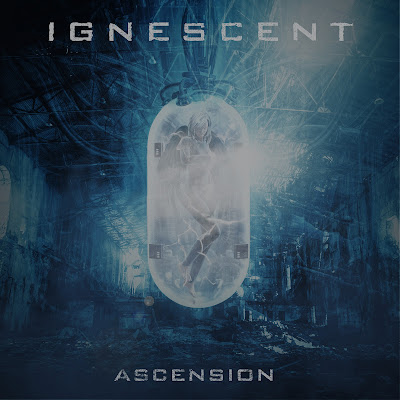 (c) 2022 Independent Release
Jennifer Benson--Lead Vocals
Ty Moreland--Guitars
Ian Sebastian--Bass
Joshua Garcia--Drums
Harsh, siren-like guitars announce the arrival of Ignescent's newest single, as the band's EP, Ascension, comes screaming to life with "Remnant".  Shortly thereafter, thick, down-tuned rhythm guitars come crashing in, pairing with the bass to reinforce a bottom end to the track that would make Love & Death proud!  This is some seriously heavy, dark music coming from Ignescent, building upon the foundation they had laid with the release of four singles over the past couple of years.  As has always been the case with the band, the real focal point of this rejuvenated group (Moreland and Garcia are new to the band) are the alternately angelic and sneering vocals of Jennifer Benson, who dwells largely in the darker, angrier portion of her delivery style for this song, matching the intensity of the music being delivered here.
For the next two tracks, Benson allows here more angelic vocal side to appear, stretching her range from that darker, harsher style used in "Remnant" to the much loftier pitches her fantastic voice allows her to use seemingly at will.  Benson lists Flyleaf as an influence, and her ability to change styles and pitches with ease is definitely reminiscent of what Lacey Sturm has show, although with one notable exception, Benson never really ventures into the full-throated screaming territory that Sturm regularly treads.  "Better Left Forgotten" finds Benson using a more restrained approach on the verse sections, then soaring through the chorus sections.  Musically, "Better Left Forgotten" maintains the crunchy, floor-scraping tuning on the guitars, but Benson adds a bit more melodic flair to her vocals here, ratcheting the overall feel of the song up from the angry depths that "Remnant" explores.  I would be willing to bet this song sees release as a single by this summer, and I predict it will hit hard, although it may be more on harder stations, or even metal stations, that "Better Left Forgotten" finds its biggest success.
Easily the most radio friendly of the four tracks on this EP, "Anymore" is going to please long-time fans of the band, with a hard rock sound blending with a touch of melodic pop-rock to the song's structure.  Benson's vocals on "Anymore" are spectacular, as she showcases her full range and various styles, climbing the scales with a sweet run through the chorus, which I rank as one of the catchiest I have heard in the modern rock world thus far in 2022. Easily the most melodic of the tracks here, with Moreland utilizing some smooth, catchy melody lines throughout the song, "Anymore" may actually see the band at their creative peak at this point in their career, combining styles and influences with ease.  Hard enough to please the rivotheads, but melodic enough to entice copious amount of play from stations like TheRockHD.net and ChristianRock.Net, I think "Anymore" is going to be all over the place when it sees release as a single and my hope is this track really breaks the band to the next level and exposes people to just how talented this band has been for ears.  I rarely say this about songs, but in this case I will make an exception: I would LOVE to hear an acoustic version of this song!  I just think the song structure and Benson's amazing vocals really lend themselves to a powerful, emotional acoustic rendering of this song.  Just my take...
The EP closes with "Final Fight", which forgoes anything sweet in lieu of sheer aggression, from the snarling bottom-end of the rhythm guitars to the pummeling drums, the rumbling bass to Benson's urgent, angst-filled vocals. For fans familiar with the band's singles from 2020 and 2021, think of the darker sounds the band used on "Demons777" and get angrier.  Returning to the opening sounds and styles of "Remnant", this bottom-heavy rocker is a perfect closer to this EP and finds the band in seriously aggressive modern hard rock/metal territory that fans of The Letter Black will likely grab hold of instantly.  Featuring a catchy pre-chorus, a chunky breakdown, and some catchy guitar work from newcomer, Moreland...as well as a serious scream from Benson just moments before the track closes, "Final Fight" leaves the listener wondering what just smacked them in the ear hole!
Ignescent continues to grow and evolve with each release, and this EP finds the Chicago-based band at their creative zenith to this point in their career.  Although the band has crafted a sound and style that is rather easily identifiable as Ignescent, on Ascension everything is bigger, heavier, darker, and more well-honed than on their previous single releases. Admittedly, I would have loved to have had those four 2020 and 2021 singles packaged with these new tracks to give the listener something closer to a full album than this achingly small EP, and I will always prefer physical media to digital-only releases, but I don't fault the band for wanting to get fresh music out to their fans.  Perhaps at some point in the not-too-distant future we will see a full Ignescent CD, but for now, I highly encourage fans to hit their favorite digital media platforms to check out Ascension.
Rating:  Very short but very solid!  Crank this 15 minute tease to 8 and make sure you set your player to repeat because Ascension is so engaging it will simply fly by!
Back To Reviews Index

Posted by arttieTHE1manparty at 8:50 PM