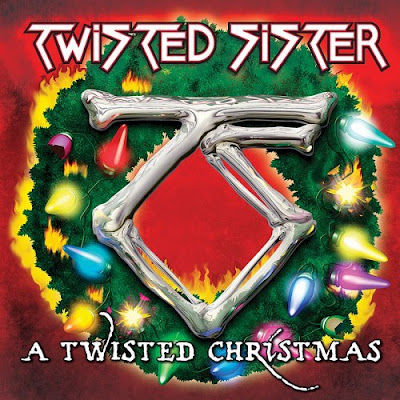 As a general rule, I have a hard time with Christmas albums that are recorded by established acts.  They come off as little more than a cash-grab and are usually not very good, not very original, and not worth the time.  When I saw that Twisted Sister, a band which I have always loved, was putting out a Christmas album, I was greatly concerned, to put it lightly.  After fighting back some stomach problems, serious eye-rolling, and at least one anxiety attack, I picked the disc up and took it home.

I have to admit, I'm pretty glad I did.

Twisted Sister does not sacrifice who they are on this Christmas album in any way, shape, or form.  In fact, if you don't recognize the more than passing resemblence of "Oh Come All Ye Faithful" to "We're Not Gonna Take It", you either aren't a Twisted Sister fan or you are so oblivious to music I don't really know why you are reading this review.  There is also a very similar riff in "I Saw Mommy Kissing Santa Claus" to the Judas Priest classic, "You've Got Another Thing Coming".  Both tracks rock very hard, especially when you remember they are Christmas tunes, and there are not a lot of little old ladies in nursing homes who are gonna slap this disc into their player to warm the hearts of their fellow residents around the holidays!  "Let It Snow, Let It Snow, Let It Snow" is another furious rocking number the way TS performs it, even with the jingle bells that are tossed in for good measure.  "Deck The Halls" has a big, gang-shouted "fa la la la la" chorus and a ripping guitar solo, and the traditional "Twelve Days of Christmas" is given a Twisted make-over and is turned into the "Heavy Metal Christmas" song with some pretty funny lyrics, although I am sure many purists will not find the humor in them that I do.  I even found myself liking the power ballad-esque "i'll Be Home For Christmas" featuring a duet with Lita Ford.  Musically, this song once again hearkens back to a Twisted classic, feeling very much like "The Price" at times, especially on the intro.  Ford's voice is rather strong here, and is in much better form than she would be later on her God-awful Wicked Wonderland comeback album (more on that in another review...).

Not everything works overly well, which I suppose is to be expected.  Album opener "Have Yourself A Merry Little Christmas" had me VERY worried when I heard it, as it doesn't rock at all and sounds like a bad lounge act performance for the first minute or so.  It does kick in a bit after that, although it would have been better being buried lower on the tracklisting, but that intro had me shivering and shaking and I wasn't out in the cold.    "The Christmas Song" (better known to some as "Chestnuts Roasting On An Open Fire") is okay, but not great as it is just too slow for the most part.

The album closes with what sounds to me like a radio drop-in for the holidays with people chanting "we wish you a Twisted Christmas and a Twisted New Year".

Rating:  Why rate it?  It's a Christmas album!  Just get it and enjoy it annually!

Back To Reviews Index
Posted by arttieTHE1manparty at 10:49 AM