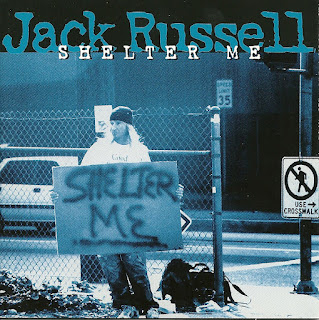 With the recent drama surrounding Great White, I thought now might be a good time to pull out Jack's solo material for a review in case folks want to hear some different music that at least sounds like Great White.  I'm sorry, but as possibly the biggest Great White fan you will ever meet, I can tell you that, no disrespect to Terry Illous, formerly of XYZ, Great White without Jack Russell is NOT Great White.  It is Jack's voice (and his songwriting) that makes this band for most people.  Granted, Mark Kendall's guitar is a huge part as well, but without Jack, I don't know how much interest I have in seeing Great White.  If I get the chance to see them live with Terry I will check them out and let you know...

Shelter Me is Jack's first solo album from 1996 when it seemed the band was pretty much at an end.  My copy is an import from Japan, which may be the only way to get it, since it is long out of print and rather difficult to find.  However, if you are a fan of Great White, I can honestly say it is well worth the effort to track it down.  This album is chock full of Great White-sounding songs including one remake "Save Your Love", and one that managed to be released as a Japanese bonus track on Can't Get There From Here ("Hey, Bulldog").  Add in Michael Lardie on rhythm guitar and keyboards, and it is actually pretty hard to separate this disc from any of the other solid, yet underappreciated, Great White discs of the 90's.  There really isn't much "hair" to the sound, just good, solid blues-based hard rock,

There are a couple of weaker tracks here, "The Fault's All Mine" comes to mind, but for the majority of the disc you get what you would expect from Jack...smokey ballads and foot-stomping rockers.  Among the best of the uptempo material is the previously mentioned, "Hey, Bulldog", "Shine On", "24/7", and the title track, "Shelter Me".  Of course, it is the blues-soaked ballads that Jack is best known for, and he doesn't disappoint here.  The semi-acoustic remake of "Save Your Love" is a nice surprise, as it is just Jack and a guitar (not even a drum on the track), which showcases Jack's powerful vocals all the more.  "When I Look In Your Eyes" is a bit more of a pop-styled ballad than most, but it is still solid and worth a listen.  "You'll Lose A Good Thing" is another smokey barroom ballad the likes of which Great White fans clamor for, especially at live shows.  In fact, that is one thing about Great White that I can say I have not really witnessed with other bands...the ballads garner as much, or more, attention as the rocking numbers do in concert.

The packaging is full-fledged here, with complete lyrics included, both in English and Japanese, as is the norm with Japanese imports.  Of course, being the compulsive collector that I am, I had to make sure the Obi strip was included with this disc when I got it.

If you can find this disc, be prepared to pay in the range of $35-$50 most likely, which I know is pretty steep for the average listener.  However, if you are a fan of the band, the singer, or the style, there are not a lot of albums from this time frame that will satisfy your hunger for this type of music.  And if you are like me and just want some more solid Great White-esque material to enjoy, especially since it looks like the two touring versions of the band are not going to be settling their differences anytime soon, you could do a lot worse than finding this import effort.

Rating:  I may be biased, but I still say crank this to 8, especially if you are a fan of Great White discs like Let It Rock or Psycho City.