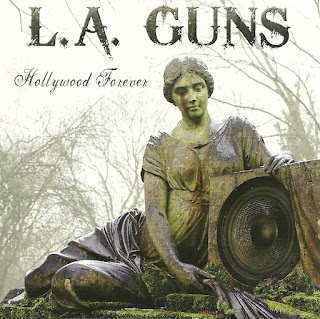 The debate over which is the "real" LA Guns can now come to a conclusion, as Hollywood Forever, without a doubt, proves that Phil Lewis and Steve Riley have the definitive version of the band.  Taking a large chunk of their first three albums, mixing in doses of their last two, and thowing in just a smidgen of a modern sound, LA Guns has crafted an major contender for Top Ten albums of 2012, and definitely one of the top five albums of the band's storied career.  This album is exactly what I was hoping it would be when I heard they were recording a new disc, and it actually exceeds my expectations despite the fact that I really enjoyed their last two studio records, Waking The Dead and especially Tales From The Strip.  What caused my trepidation was the atrocious Rips The Covers Off effort, which I honestly can't say that I ever listen to now.

When I say that the band has gone back in time a bit to the sound of their first few albums, I am not exaggerating.  The title track, "Hollywood Forever", and other stand-outs such as "Vine St. Shimmy", and "Venus Bomb" would all have fit on the debut or on Cocked And Loaded, in my opinion.  "Crazy Tango" a mid-tempo, bluesy number, has a lot of that early attitude as well.  What makes these songs even better is the fact that they feel like early LA Guns material, even though Tracii Guns is no longer with the band; Stacey Blades does just an incredible job of incorporating his own personality into the LA Guns sound, ripping off some fabulous solos, such as the soulful lead found in the previously mentioned "Crazy Tango".  "Queenie" is another bluesy sounding number that would have been right at home on earlier LA Guns albums.

The minor hints at modern sounds I mentioned earlier come on a couple of excellent songs.  "Burn" is one of my absolute favorites here, but there is no questioning a bit more of a modern feel here.  The equally cool "Dirty Black Night" also has a quasi-modern feel without losing its sleaze-sensibilities, and is another track that I absolutely dig.  Just really cool stuff here, with LA Guns maintaining their classic sound but also stepping into 2012 at the same time.

Vocally, Phil Lewis hasn't sounded better, in my opinion, even going all the way back.  I don't know what he has done to keep his voice in such great shape, but I can state with no reservation that all of these songs will nestle alongside classic stuff on your CD player without anyone being able to tell a difference in Lewis' voice.  The rest of the band is just as solid and tight, giving this album a full, cohesive sound that a lot of "reunion" acts seem to be lacking on newer efforts.  Perhaps some of the credit for this should also go to producer Andy Johns who seems to have coaxed the best out of this band.

There is only one song I don't overly care for, and that's "Requiem (Hollywood Forever)"; I just don't think it serves any real purpose on this album.  It's a decent enough ballad, I suppose, but the rest of the album is pretty much mid-tempo to full-speed ahead, and this major slowdown right before the end doesn't do a lot for me.  I guess that, at the least, they buried this so that the rest of the album flows pretty well, and the overall performace is strong.

I have read/heard that a lot of people don't like the closing track, "Arana Negra", which Lewis sings entirely in Spanish.  I guess I don't understand why people don't like it unless it is because they can't understand it.  This song is performed with as much LA Guns' swagger as any track they have recorded over the past several years, and Lewis does (as far as I can tell, anyway) a very credible job on the Spanish lyrics.  Sure, I would like to know what the heck he's saying...he could be casting a voodoo spell on me everytime I play this song, for all I know...but I don't think it is any kind of distraction or detraction from the rest of the album.  If anything, I find it cool that the band is reaching out and trying different things at this stage in their career.

This is an excellent album from a classic band that has really found their stride once again over the past couple of studio albums.  There were some wobbly steps being taken for a couple of albums, but this version (and I have to say the REAL version) of LA Guns is on strong, steady legs now, and I see no signs of slowing down or stopping from Lewis, Riley, Blades, and Griffin.  Old fans and younger fans of the 80's Sunset Strip scene should find plenty to be happy about with Hollywood Forever!


Rating:  Crank this to a remarkable 7.5!  LA Guns not only has returned, it sounds in many ways like they never left!

Posted by arttieTHE1manparty at 4:28 PM