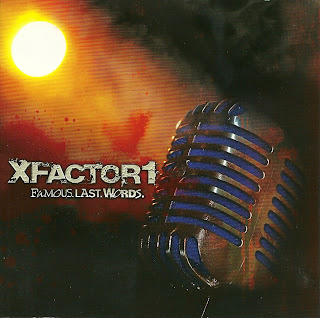 A few weeks ago, I previewed this album for you when I checked out the two-song promo the band had sent to me.  Now, I have the enitre XFactor1 album, Famous.Last.Words. in hand and have had some time to get comfortable with things.  Much as I stated in that promo review, XFactor1 is a band that is somewhat hard to nail down with a singular description of style and sound.  Sure, they are definitely a modern hard rock band with some metallic hints , but they are not a band that is going to be mistaken for a clone of anyone else, thanks in large part to QBall's vocal style.  I am not going to say he is the best singer out there, because he is not, but I will say that his presentation is unique and definitely gets your attention.  As a band, XFactor1 has garnered quite a bit of attention themselves, as they spent a few weeks on Billboard's Heatseeker's chart and were also listed as a Red Bull band to watch in 2010.  So...did they live up to that promise?

Can I say maybe?

Inconsistency seems to be a problem on this album, at least to my ears.  Just when I think the band has a sound or style locked in, they switch gears almost completely and throw me for a loop.  Now, that isn't always a bad thing with an album, but here the stylistic changes are almost distracting.  When they are at their rocking best, such as on the ripping album opener, "Bring It On", the equally thumping "Parasite", or even on their cover of Billy Squire's "The Stroke" (yes, I said Billy Squire!), XFactor1 really grabs your attention in a positive way. "Over And Out" is another solid rocker which borders on metal, as do "Break You" and "Live Another Day".  If the entire album sounded like these songs, and still included the 80's sounding "Miss Me Now" (which actually sounds more 80's than their cover of an ACTUAL 80's song in "The Stroke"), I think I could have really gotten into this record.

The problems, for me, at least, lie in when the band does something seemingly to be unpredictible.  For example, when they pull something out of nowhere...like the acoustic "Never", or the Type O Negative-ish "It's My Life", it just throws everything out of whack.  The songs aren't terrible, but they don't seem to have any real reason for being here and don't even really sound like the same band.  The middle of the disc bogs down quite a bit with "Shadow Of Depression" and "Tragedy" going back-to-back, and this also serves to disjoint the flow of the album as well.  The lyrics to "You Suck" are also so cheesey and, dare I say moronic, that they tarnish what I think would otherwise be a pretty decent song.

Having never heard their previous album, which is the disc that garnered them the national attention they enjoyed a couple of years ago, I don't know if Famous.Last.Words. is a step forward or a step back.  I do know that XFactor1 has a pretty strong fanbase that is constantly sending me emails and links to videos, wanting me to get on board with this new album, which I have tried really hard to do.  I just can't say with 100% honesty that I am fully convinced of...nor am I totally opposed to...the hype that these guys have received.  As I said, if nothing else, they are unique in their style and sound...and appearance, for that matter...and I have heard they put on one heck of a live show, so if you get the chance, definitely check them out.  I can also say that they have a VERY good drummer, as Chris Crum's skills really help to bring to life the more metallic sounds of the material here.  As to the album, it is one that grows on me a bit more with each listen, but it's not going to be a threat to make the Top 15 at the end of the year, either.

Back To Reviews Index
Posted by arttieTHE1manparty at 5:37 PM